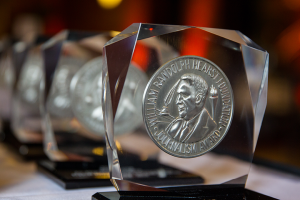 The UNC Hussman School of Journalism and Media finished first overall in the Intercollegiate Competition of the Hearst Journalism Awards, often called the Pulitzers of college journalism, for the second year in a row. The win was announced during a June 8 ceremony in San Francisco. December 2010 graduate Arkasha Stevenson won the individual national championship in photojournalism, and senior Margaret Cheatham Williams won the individual national championship in multimedia.

The school's overall first-place finish resulted from students placing in monthly writing, photojournalism, broadcast and multimedia competitions during the 2010-11 school year. The school placed second nationally in both broadcast news and photojournalism and 12th in writing in the intercollegiate competition. Points from multimedia competitions counted toward the overall win, but no places were awarded in the category.