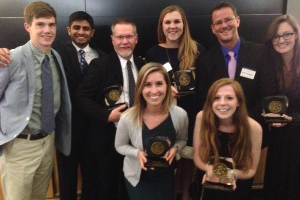 The UNC Hussman School of Journalism and Media has won the 2015 national championship in the Hearst Journalism Awards competition – considered the Pulitzers of collegiate journalism.

It’s the school’s 3rd overall national championship since 2010. UNC is the only school to have finished in the top 5 overall every year since 2004.

In 2015, the school finished overall 1st in broadcast, 2nd in multimedia, 2nd in photojournalism and 3rd in writing. Since the addition of the multimedia category in 2008, UNC is the only school to have finished top 3 in all four categories.

Three others posted top 3 individual national honors in the radio, TV and multimedia categories of the Hearst competitions.

Callaghan O'Hare, a senior from San Antonio, Texas, was awarded $1,500 as a finalist in the photojournalism competition.

The championships are the culmination of the 2014-15 awards program, which are held in 108 member colleges and universities of the Association of Schools of Journalism and Mass Communication with accredited undergraduate journalism programs.

From June 1-4, 29 finalists participated in the championships in San Francisco, where they demonstrated their writing, photography, radio, television and multimedia skills in rigorous on-the-spot assignments chosen by media professionals who judged the competitions. Winners were announced during the final awards ceremony on June 4 at the Westin St. Francis Hotel.

The Hearst Journalism Awards Program was founded in 1960 to foster journalism education through scholarships for outstanding college students. Since its inception, the program has distributed more than $12 million in scholarships and grants for the very best work by student journalists.