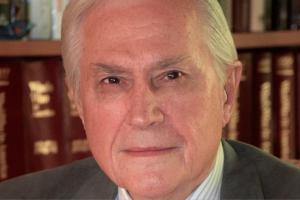 The University of North Carolina at Chapel Hill Board of Trustees presented its highest honor, the William Richardson Davie Award, to UNC Hussman School of Journalism and Media alumnus Roy H. Park Jr. on Nov. 18, 2015, in recognition of his “dedication, commitment, loyalty and service.”

Chancellor Carol L. Folt and the trustees presented the honor to Park along with two other University alumni — Lucius E. Burch III and Betty Ray McCain — during a dinner ceremony at the Carolina Inn.

Established in 1984, the Davie Award is named for the Revolutionary War hero who is considered the father of UNC-Chapel Hill. It recognizes extraordinary service to the University or society.

Park, a 1961 graduate of the school, is president and chairman of Park Outdoor Advertising in Ithaca, New York. He is also president of the Triad Foundation, which pursues several philanthropic objectives to honor the legacy of his father, a self-made entrepreneur who founded the Duncan Hines food group and Park Communications.

“Roy Park personifies the soul of the school,” said Dean Susan King. “He was challenged here to reach the highest levels of his chosen communication field, and he has had a career that combines business with creative flair.”

Since 1997, the Triad Foundation has funded the prestigious Roy H. Park Fellowships, providing tuition, stipends and other support for master’s and doctoral students at the UNC Hussman School of Journalism and Media. Park, who serves on the school’s Board of Advisers, is a 2011 N.C. Advertising Hall of Fame inductee and a 2005 UNC Distinguished Alumnus Award recipient.

“He was also inspired to give back and now more than 400 Park Fellows have been able to pursue post-graduate education at our school because Roy Park and his children offered them that challenge, that opportunity and that inspiration,” King said.

The first class of Park Fellows enrolled in fall 1997. Park Fellow Ph.D. alums include full and tenured associate professors at research-intensive universities. From the professional master’s track, fellows have found jobs at industry giants such as Google, MSNBC, CNN, the World Bank, The New York Times, the Boston Globe and the Guardian-US.

The fellowships, by positioning the school to draw top graduate students and adapt its program to changes in the field, augmented the school’s growing prestige.

“The Park Fellowships have been and are the best award program for graduate students in journalism and mass communication in the world. The Park family has been exceedingly gracious and generous to us for years and years,” said former dean Richard Cole in 2013 at the 15th anniversary of the Park Fellowships.

After earning his MBA from Cornell University in 1963, Park began an advertising career that has spanned more than 40 years. He joined Park Communications, his father’s multimedia empire, in 1971, and served in multiple leadership roles for more than a decade before acquiring Park Outdoor Advertising in 1984.