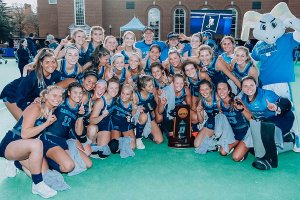 UNC Hussman students have a special reason to give thanks this holiday season: an NCAA trophy. The UNC women’s field hockey team brought home the national championship November 24, after a 6-1 win over Princeton (read more on the game from The Daily Tar Heel here).

That marked the second perfect season in a row for the powerhouse team, after a legendary 2018 run. (Watch the Hussman-produced documentary on that season here).

And four UNC Hussman students helped propel the team to victory this year: Bryn Boylan ’21, Catherine Hayden ’19, Eva Smolenaars ’21 and Erin Matson ’22. Hayden, Smolenaars and Matson spoke about the victory and how their team and school got them through the tough season.

BELIEVE IT, DO IT, EARN IT
The team chose a new motto for this season: “Believe it, do it, earn it.” Though they were thrilled to come off a perfect 2018 run, Hayden acknowledged the pressure of living up to that example was weighing on them — especially since the team lost some senior talent.

“We were in desperate need of rebranding ourselves,” Hayden said, thinking in true Hussman advertising/public relations fashion. She said the team came up with the motto after realizing that “the thing that really held us together and had us fighting was belief that we could do it.”

Matson, who earned the NCAA Tournament’s Most Outstanding Player award, echoed the theme: “We had the mentality of taking it one game at a time and not getting too far ahead of ourselves … There was a lot of belief.”

HUSSMAN IS HOME
“The Hussman school has a lot of wins recently too,” Hayden noted, drawing a parallel between the team’s standout season and UNC Hussman’s transformative year. “It also knows how to be successful.”

Hayden said the Hussman students on the field hockey team had always felt support on “another level” from the school’s faculty and staff. “They back us, they love the athletics at UNC and they love UNC being successful,” she said. Hayden, who graduates this semester, reflected on Hussman’s role in her career at UNC. She was able to combine her two passions this year as a 2019 Carolina Blue Honors Fellow, traveling to Johannesburg, South Africa to work with Levergy, a sport and entertainment PR agency. She credits the school’s backing for her academic success. “When I think of Hussman I think of how supportive my teachers have been throughout my time doing PR,”  she said.

Matson, who is majoring in advertising and public relations, said she became interested in Hussman classes after hearing older teammates like Hayden rave about the school. “Hearing great reviews about the professors and school in general made me want to take advantage of what the school has to offer,” she said. Though she has understandably been a little busy this semester, Matson is about to jump into a full spring semester of MEJO classes and said, “I couldn’t be more excited.”

ALL ABOUT COMMUNITY
All the players agreed that the team could not have done it without the larger UNC-Chapel Hill community. “It was very special to play so close to Chapel Hill and have so many people there to support us and watch us achieve our dream,” Smolenaars said. “This season has been so special because we all became so close.” Smolenaars, who scored two goals in the final game, and Matson both said the team came first over their individual achievements.

“We were able to play as a unit and that’s what separated us,” Matson said. Smolenaars added, “I don’t really care who scores the goals … in my opinion, when one of us scores, we, as a team, score.”

The players are allowing themselves some time to savor the victory this holiday season. “We’ll all be celebrating with our families over Thanksgiving,” Matson said.