Q&A: About the “skimmtilating” visit from Danielle Weisberg and Carly Zakin 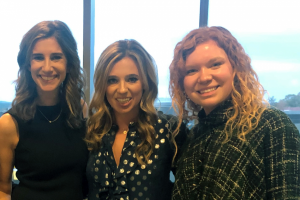 As journalists adapting to a digital-first world, UNC Hussman students got the valuable chance to hear from two entrepreneurs who have turned a daily newsletter into a 7-million-subscriber business. theSkimm was founded in 2012 by Danielle Weisberg and Carly Zakin, two former news producers. Their goal was to break down the news every weekday for an audience of young millennials across the country. Seven million subscribers later, theSkimm calls itself a membership company — with a bestselling book, an app, weekly podcasts, a brand ambassadors program and other projects in the works.

Earlier this semester, The Shuford Program in Entrepreneurship welcomed Weisberg and Zakin to Carolina for a “skimmtillating” Q&A at the FedEx Global Education Center — a great opportunity for Hussman students, staff and faculty to hear from the entrepreneurial duo.

From the podium, Weisberg and Zakin recognized current Carolina student Caroline Ciaramitaro (at far right, with Zakin and Weisberg), who’d interned with them as a rising junior in high school. Cairamitaro is currently a Morehead-Cain Scholar and Innovation Scholar who's crafting an interdisciplinary major around media, data analytics, business and psychology — looking at how to leverage behavioral science to drive consumer behavior.

We caught up with Ciramitaro after the lecture. The conversation, edited for length and clarity below.

What a nice shout-out from the stage that was! Must’ve made you proud.

Yes, it did (and made me red!). More importantly though, I think it was a true testament to Carly and Danielle as leaders. They are not just talking the talk but truly living by their words in speaking of bringing up other women with them.

What made you reach out to Carly and Danielle originally about becoming an intern for theSkimm?

I was fifteen when I reached out to them. I interned with them the summer after my sophomore year of high school. Then I was asked back as a specific marketing and analytics intern.

I reached out because of a deep love — and borderline obsession — for their story. They had their dream jobs of working at NBC and quit it all to start theSkimm from the couch because they found a void and sought to fill it. Well, up until that point in my life, working at NBC was also my dream job, but now it was to work at theSkimm.

I read every article there was on them, became enthralled with their mission, and somewhere along the line convinced myself that the only logical next step was for me — a fifteen-year-old from Memphis, Tennessee, with absolutely no connection to New York — to work there. So, I wrote them letter after letter. I may or may not have also sent BBQ sauce to the office as a borderline obsessive/annoying plea for attention. One day, someone responded, and it all went from there.

Those internships were really immersive “hands on” experiences for you?

Yes. The first summer I was a general intern when the team was only 15 people. I worked closely with their Skimm’bassador program and helped build out that community through various programming.

The following summer the team hit 50 people, and I returned as a marketing and analytics intern. I conducted audience analysis, worked on partnerships, and helped coordinate campaigns.

Every day was a ”hands on“ experience — it's the nature of the start up environment and at the core of theSkimm's culture. They’re scrappy, and it shows. Every day, I walked into the office not just excited for the work myself but also surrounded by people who were genuinely energized and impassioned by the work they were doing, no matter if they were on the engineer team or the editorial staff.

So now you’re an entrepreneurial minor at the College of Arts & Sciences, and you’ll be taking MEJO 187 (Foundations of Interactive Media) at UNC Hussman this spring. What is that like?

I came to Carolina because it offered itself as a place at which I could truly maximize my educational experience. As a Morehead-Cain Scholar and Innovation Scholar, I knew that I would be pushed and supported by meaningful communities that would help me navigate these four years and beyond.

What did you think of the Shuford Lecture?

theSkimm’s story is spectacular, but what really inspired me about the lecture was Carly and Danielle’s candidness about their experiences. They’re real, and they tell it like it’s real. They do not just position themselves as an entrepreneurial success story but as a true testimony of entrepreneurship — all the good, bad, and grit along the way.

What was the main takeaway for you and your future — can you imagine learning from the success of theSkimm (and your experiences there) to build your own entrepreneurial success?

At their core, Carly and Danielle are scrappy. It showed when I worked with them, and it shows in every word they say about their experiences with theSkimm. I think there is a lot that I can — and want — to learn in school, but I think that this innate sense of scrappiness is still the most pivotal thing I've learned from watching them.

Do you know anyone who has had a less successful entrepreneurial experience — does that make you hesitate?

Of course. I also know of a lot of “successful” entrepreneurs who have had “less successful” entrepreneurial experiences, and I do not think the two are mutually exclusive. Something will work and others will not, but I think the most important thing is to be able to have the perspective to recognize which is which and to have the drive to figure out why it is so. I do not think I would hesitate simply because I have seen “less” successful ventures before me, but I would hesitate if along the way I lost that sense of drive to continue asking the important questions.

What’s next for you?

I spent this past summer working at the Yosemite National Park. The woods are great and beautiful, but I think my heart might be in a boardroom. I am looking for an internship next summer that would allow me to hone in on my data and media production skills while also applying my business strategy experience.