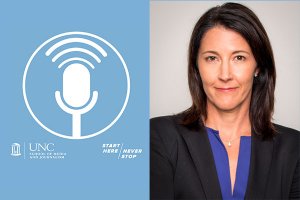 Describing a “phenomenal experience,” Lisa Stockman, president for communications at inVentiv Health, discussed her time in the MATC program in a recent Start Here / Never Stop podcast conversation with Dean Susan King.
Stockman, a 2013 graduate of UNC-Chapel Hill’s online master’s program in digital media, appeared as a podcast guest at the end of 2016, a year in which she was recognized by MM&M and PRWeek at No. 33 among the nation’s top health influencers and by PharmaVoice as one of its 100 most inspiring people.

A member of the first MATC cohort, Stockman looks back fondly on her experience as an MATC student, recalling lessons learned from both her instructors and her classmates.

“It was a phenomenal experience, the classes and also the cohort that you go through the program with,” she said. “You learn so much from the professors, from the material, but also from peers that you have in the program, that I really, still to this day, am dipping back into and applying to the challenges that I face in the business.”

A company of more than 15,000 employees, inVentiv Health services biopharmaceutical firms in the effort to move therapies to market. Stockman helped create the company after earning a bachelor’s degree in public relations from the Hussman School. She’s now a 25-year industry veteran and heads an integrated team responsible for advertising, public relations and medical communications.

When Carolina began offering its online communication master’s in 2011, she took advantage of the chance to attend graduate school from her base in New York. “Technology and digital was changing the way that we needed to work with clients, the way we needed to communicate about products and diseases for the pharmaceutical industry. I felt like I just needed a grounding in that to be able to effectively lead my company.”

In her interview, Stockman discussed the importance of persuasion and strategy in communication and understanding patient audiences. She spoke about the influences of her children and her mother, and about the foundations she built as a Hussman School undergraduate.

She’s glad she took on the challenge of simultaneously managing family, work and school responsibilities as an online student.

“It was tough to fit it all in, but it was well worth the effort for what I learned and how it’s helped me in my career.”