UNC Hussman gathers expert panel on Election 2020 and what's next 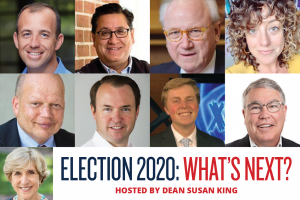 Long before November 3, UNC Hussman faculty and leaders including Dean Susan King, a veteran political journalist, knew that the aftermath of Election Day would arrive with a lot of questions and that the school’s excellent student journalists and communicators would be eager to tease out the answers. King drew on Hussman’s extensive network of experts in the communications, politics and media fields to facilitate a conversation about the issues at the top of mind during this consequential week.

In a Zoom webinar on Wednesday Nov. 4, an audience of over 100 joined King and a distinguished panel: Damon Circosta, Chair of the North Carolina State Board of Elections; UNC Hussman Associate Professor Paul Cuadros, Chair and Executive Director of the UNC Scholars' Latino Initiative; Professor of the Practice Ferrel Guillory, founder of the Program on Public Life and co-founder of EducationNC; Shannon McGregor, UNC Hussman assistant professor and a senior researcher with the Center for Information, Technology, and Public Life; Ted Shaw, Julius L. Chambers Distinguished Professor of Law and Director of the UNC Center for Civil Rights; Michael Steel ’99, Partner at Hamilton Place Strategies and former press secretary to Republican Speaker of the House John Boehner; student Chip Sweeney ’21, Executive Producer for Carolina Week; and Ford Worthy, co-founder of the VoteFearlessNC non-partisan citizen initiative.

All brought a different and knowledgeable perspective on the election to the table. Most importantly, King noted, the diversity of political thought that was so evident in the election results was considered in the discussion.

“UNC Hussman is engaged with a community of skilled journalists and communicators with valuable expertise across the political landscape,” said King. “In this heated election period, these panelists demonstrated the importance of a thoughtful exchange of ideas backed up by deep industry knowledge and research.”

The audience got a real-time look at the still-developing political situation in North Carolina as Circosta shared his experience as an election official in our contentious battleground state. Though he admitted that he’d gotten very little sleep, Circosta’s outlook was positive.

Circosta recognized the disruption around a peaceful march to the polls earlier this week in Alamance County, calling it “unacceptable.” He revealed that officials had been worried earlier in the year about mass disruptions at the polls on Nov. 3. But on the actual day, “we had a very smooth and very well-run election,” Circosta said, citing the professionalism and work ethic of poll workers who “kept the funnel for democracy open.”

He was also heartened by North Carolinians’ turnout and expression of their fundamental right to vote on Election Day. Disputing the political idea of a ‘silent majority,’ Circosta argued, “there is no silence. People are getting involved. … The race now is to convince them that your way to conduct a government is the right way.”

Worthy, vice president of the UNC Hussman Foundation Board, agreed that a smooth voting process in North Carolina is key for public trust. The aim of Worthy’s group VoteFearlessNC, is to “create a vehicle that would give political leaders, business leaders and community leaders, a place to speak out to renounce voter intimidation at the polls.”

Worthy also argued that the last few political cycles had highlighted “the critical role that norms really play in a well-functioning democracy.”  The large turnout in North Carolina, Worthy said, was “a sign that we need to continue to look for any possible effort to come together and work together to promote common interests.”

Steel was still closely tracking results and giving the panel behind-the-scenes insights of the political breakdown for both parties. The mixed and close results “should be chastening both for the progressives who were anticipating a blue wave and a massive democratic majority and for the President's most fervent supporters,” Steel said.

He argued that the Republican Party needs to build a coalition with increased support among minority populations. He noted there were some “encouraging” signs for the party on that score in the 2020 results, particularly among Latino voters.

Steel also advocated that all the votes cast by Election Day be counted, noting “this is what a free and fair election looks like in a closely divided country.”

Shaw agreed that “we are a split country.” But he argued that “America has had deep divisions from the beginning.” Shaw, responding to students’ questions, said he was concerned about racial divisions in the United States and understood the anxiety that many students of color might feel going into the charged political and media atmosphere.

“I'm looking for students who are willing to become advocates against hatred and racism and injustice,” Shaw said. “But I also want the rest of us already out in the world to be supportive of them.”

But, reflecting on the 2020 election, Shaw also argued that “there’s a lot we should be happy about and proud of in this moment.” The historically high voter turnout is, he said, “cause for celebration.” His goal now is to see more on both sides of “Americans who are patriotic, who love our country, as opposed to demonizing and vilifying those with whom they disagree.”

UNC Hussman’s own students and faculty also exchanged ideas — along with some hopes and fears — for the political future.

Guillory, who has decades of experience studying North Carolina as a journalist and scholar, explained the different political forces at play in the state. He noted that the state was as divided as the rest of the country and that “the resolution of issues is not going to come easily.”

Guillory shared a reflection on those divisions with the audience, urging, “We've got to work our way out of this.

“It’s not just the media’s doing, although the media has a role to play.” he said. “It's not just the political system, but the political system has a role to play. But it's our churches and our religious institutions. It's the way we teach civics and history in our schools. It’s the kind of convenings that we have in our communities. … We need additional thinking about how we rebuild community, how we think of ourselves as part of the same body politic.”

Sweeney spoke on behalf of many of his fellow students when he expressed apprehension about public distrust of the media. He noted that it could sometimes feel “overwhelming,” particularly when young journalists face misleading information and backlash on social media.

Sweeney also reflected that perhaps his generation needed to weather the storm of massive technological and societal change.

“That might be something that we have to deal with in the coming years while people are wrapping their heads around the fact that society is going through a change, but we are going to come out the other side of it,” he said.

McGregor, a foremost experts on politics and social media is a new member of the UNC Hussman faculty and was there to break down the issues for the audience. During the panel, McGregor kept an eye — and kept the audience updated — on Facebook and Twitter’s responses to misinformation about vote counting.

McGregor repeated the refrain that when it comes to political forces on social media, “we can't say that digital advertising and micro targeting is all bad or all good.”

Social media, she noted, “on the one hand, has the potential to further divide people. But on the other hand, it allows for super-targeted reaching into some of these newer, growing demographics that are becoming super important in the country.”

Fellow faculty member Cuadros highlighted that focus on change and new demographics, noting that “we are a divided country because we are a changing country.” Cuadros, along with McGregor and Steel, highlighted the behavior of Latino voters as one of the most potent forces of political change.

Cuadros emphasized that the Latino vote, which he has studied for years, is not “monolithic” and drew different results in different states and demographics throughout election night.

“Both parties are going to have to learn how to adapt to those changes now,” he said. “And it's going to require different strategies and different appeals to those different emerging constituencies.”

“Everyone wants to get ahold of our state’s best and brightest political pundits the week of the election,” said alumna Laura Brache ’17, who asked multiple questions from the audience. “As a journalist covering a lot of the topics that came up today surrounding changing demographics and the Latino electorate, this event was a one-stop-shop to hear from experts who are really passionate about North Carolina’s role in politics.”

Brache, a corps member of Report for America in Charlotte, also welcomed the panel’s timing and message.

“I really appreciated Dean King’s emphasis, more than once, about how though Election Day is over, we’re not done just yet and that we must be patient, tolerant and trust the process,” she said. “It’s something we’ve really been trying to emphasize in our own coverage in my newsrooms, because this is a unique election.”

Though the event explored the divisions on display in the 2020 Election, the audience also took away a theme of excitement, possibility and change.

“Our faculty and alumni community continue to contribute so much to the school during the most important debates in this country,” King said. “It was valuable for students to hear a calm, respectful discussion with industry leaders who generously gave their time at this important historical moment.”