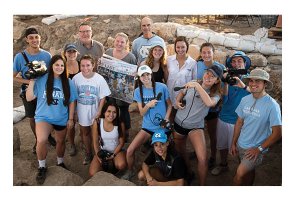 Students from the UNC Hussman School of Journalism and Media were recently recognized with awards from the Radio and Television Digital News Association of the Carolinas, which highlights outstanding work of professional and student journalists each year.

“Lots of folks are drawn to short, pithy visual content,” Tuggle said. “That’s exactly what radio and television news is.”

Tuggle also appreciates that the RTDNAC/AP awards highlight team projects as well as individual work. He called the ability to successfully work in teams crucial for any career.

An entire class of UNC Hussman students received a “Best Student Multimedia Report” award for their work documenting an archaeological dig in Israel by archaeologist Jodi Magness, who is the Kenan Distinguished Professor for Teaching Excellence in Early Judaism in the UNC College of Arts & Sciences.

“The most exciting part was to be in another country learning their culture and understanding their culture,” Laguerre said. “Working for this project was something that I didn't want to take for granted, so I did the best I could in everything.”

“I enjoy helping others learn and grow,” Walker, a senior, said of his leadership on the sports show, which broadcasts each Monday from Carroll Hall.

Though even more than a chance to win awards, Walker enjoys the real-world experience that the many hands-on learning opportunities throughout UNC Hussman provide.