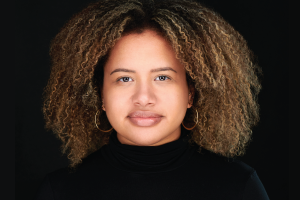 It was mid-February 2019 when several admitted MA students, myself included, descended upon Chapel Hill to gain a better understanding of what our graduate careers could look like at what is now the Hussman School of Journalism and Media. As I returned to the AC Hotel lobby after settling into my hotel room, my eyes settled on Giulia Heyward ’21 (M.A.), standing in its center wearing all black, with curly hair and big glasses. She looked like she had been plucked from a sidewalk in Brooklyn, where I had been only a few hours prior. I immediately knew we would be friends.

From the way Heyward cited professors she wanted as mentors to the classes she wanted to take, it was clear she had done her homework going into our visit. During her senior year at the New College of Florida in Sarasota, one of Heyward’s professors suggest she read “Waking from the Dream,” by Samuel L. Fulwood ’78. The book chronicles the experiences of a young, Black reporter as he struggles to assimilate into mainstream America. “He attended UNC and talked so much about his times walking down those halls, studying journalism,” explains Heyward. “It wasn’t a question at all that I was going to apply to Hussman because I was so curious about understanding this place that this book had transported me to.”

Pursuing a writing career was something Heyward never questioned. Reading and writing felt as though they were a part of her genetic makeup. Journalism felt like a natural fit because it allowed her to ask questions, to follow her curiosity wherever it led her and stay invested in it for as long as she wanted.

“I like getting to become obsessed with something, talking to a bunch of people about it, constructing a narrative, and then getting to repeat the whole process over the very next day about something else entirely different,” gushes Heyward.

That desire to become a writer is what had led her to her undergraduate school in Florida, where she filled her schedule with creative writing courses and supplemented her coursework with extracurriculars, like editing the school newspaper and interning with local magazines. Even with her intense involvement, Heyward still wanted to return to school for a more formal education because a lot of what she understood about journalism was self-taught. After applying to UNC Hussman and learning she had received the Roy H. Park Fellowship upon acceptance, there was no question she was going to pursue a degree in journalism.

Through small and big interactions with Heyward, it’s easy to assume she has everything together: her course schedule, her thesis project, her life’s goal. But she swears that’s not the case.

“I don’t think I came in with specific goals in mind, but I definitely realized really quickly which professors I wanted to work with,” she explains. “I’ve taken great classes with professors who have been really invested in the work that I, and my classmates do, and that’s made a huge difference in my experience in the class. I still struggle with feeling confident in myself as a writer, and as a journalist, and I think I’ve had lots of mentors help me believe in myself, even when I don’t.”

A certain level of adjustment is always required when entering graduate school, but the learning curve can still be intimidating. Heyward realized early on that her professors had extremely high expectations of her from the very first week, and she wasn’t immune to feeling the pressure from that. Luckily, she pushed through and was able to develop relationships with professors that helped her flourish. What might have initially started off as one-way admiration — a student respecting a professor and their work — soon became a two-way street.

“Giulia’s work this summer has shown she’s a real emerging talent in journalism, and an example for our graduate-level reporting students,” says Teaching Associate Professor Kate Sheppard. “The depth and breadth of stories is so impressive! Giulia brings a boundless curiosity and enthusiasm to her work, the kind of things you can't really teach in class but are so essential to breaking through in journalism. She is overflowing with great ideas, and the drive to pitch and execute them.”

Despite many internships being cancelled due to COVID-19, Heyward was able to secure a part-time remote internship with The Washington Monthly. It was her first time working for a political magazine and she got the opportunity to do a lot of copy-editing and fact-checking. She also published two stories on The Washington Monthly’s website, as well as some pieces for their print edition. In addition to interning, Heyward took the summer to really dive into her freelance work and ended up getting published in major publications such as The New Republic, HuffPost and The New York Times.

Although Heyward didn’t come into graduate school with concrete goals, The New York Times has always weighed heavily on her mind. Known for her love of print and deeply appreciating the work of NYTimes reporter and former Park Fellow Nikole Hannah-Jones, she has been busy laying down the foundation to establish her writing career. Some of her writing opportunities this summer came with guidance from mentors, while others came from the tried-and-true process of cold pitching.

“There are so many resources for getting in contact with editors, like Study Hall or Writers of Color. I was sending so many emails these past few months and getting so many rejections,” says Heyward. “For every one story that was published, there were anywhere from 10 to 15 rejection emails that I also received. I just needed one person to tell me ‘yes.’”

From those ‘yeses’ came two pieces in The New York Times online and print editions: “He Turned ‘I Can’t Breathe’ Into Protest Music” and “Violin Vigils Honor the Memory of Elijah McClain.” Those are the type of clips students dream of, and halfway expect to only come after graduating, but Heyward says more young writers should be given similar publishing opportunities.

So, where does one go after reaching The New York Times? For Heyward, it’s back to school and back to the grind. Currently in her last semester of courses at Hussman, she’s wrapping up research with Associate Professor Trevy McDonald, Ph.D., on a grant-funded project on Jefferson Edmonds and The Liberator, one of the first Black newspapers in the country, and beginning work on her thesis. And somewhere in there, she’s sure to publish a piece or two.