‘What is a journalist?’  with Eugene Scott ’03 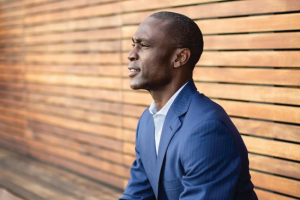 “What’s a journalist supposed to be now...,” Margaret Sullivan asked in a thought-provoking piece for The Washington Post on Sunday, June 7. From her position as media columnist for that paper, she addressed the country’s turmoil over racial injustice, the global coronavirus pandemic and devastating job losses — and pointed out that journalists are caught up in the tumult. Her headline went on to say “…— an activist? A stenographer? You’re asking the wrong question.”

We posed the question to Washington Post political reporter, UNC Hussman alumnus and Board of Advisers member Eugene Scott.

Eugene Scott focuses on identity politics for The Fix, the Post’s political analysis blog, and he is a regular on-air presence on MSNBC, PBS, the BBC and others. He and fellow UNC Hussman graduate Nikole Hannah-Jones ’03 (M.A.) appeared together on MSNBC at 4 p.m. on Sunday afternoon, the day that Sullivan’s piece ran in the Post. Listeners also heard from Scott on WAMU’s 1A The News Roundup last Friday, June 5, where he is a regular guest.

The D.C.-based Post reporter is a 2003 graduate of the school and earned his M.A. from Harvard University’s Kennedy School of Government in 2015. While a D.C. native, Scott’s ties to the state of North Carolina and to Carolina run deep. He was named for his grandfather Eugene Turner, an influential Robeson County, North Carolina, leader and past member of the Board of Governors of The University of North Carolina. Turner was recognized in a joint resolution by the North Carolina legislature the year after his death at the age of 84.

Scott reported that when he was accepted to UNC-Chapel Hill, his mother Andrea Turner — longtime staffer for Congressman Charlie Rose III, who represented North Carolina's Seventh District from 1973 to 1997 — and his grandfather got on the phone and wept for Eugene, and for the opportunity neither had been afforded by a system that did not prioritize the admission of people of color when they entered college.

“It was a privilege to get to know him as a professional and a bit of a brother,” said Scott. “Chuck was incredibly accessible, humble and approachable. He was hilariously long-winded in the way you’d be if you were someone as accomplished and had lived as long as he had.”

He added, “Brevity was not a strong point—and that was completely okay because that man had lived.”

While still a broadcast journalism student, the young Eugene Scott thought he might be in the wrong field.

“I have very poor technical skills. I struggle to operate my own remote control,” he said with a laugh. “Spending so much time dealing with production made storytelling an unpleasant experience for me.“

Fortunately, a Carolina honors study abroad program gave him the opportunity to study in South Africa, where an internship at Cape Argus newspaper gave him the chance to report news in a different way.

He returned to Carolina with a new focus, going on to write for The Daily Tar Heel on campus and then reporting for The Charlotte Observer, The Kansas City Star, The Arizona Republic, Time magazine and then — after graduate school — for CNN Politics as senior reporter on the website's breaking news team, where “I didn’t have to touch a single camera.”

Scott hastens to add that today’s students are more trained, and more flexible, in the art of multi-tasking — and the industry now requires that interconnectivity.

He certainly juggles multiple roles himself. He’s part of a team that chats live with Washington Post readers every Thursday. He records weekly videos and writes for the paper. He also enjoys a robust social media presence, something which has come under increased scrutiny at his paper and other papers of note lately.

“Twitter allows me to stay connected with people in ways that letters to the editor in the past did not,” said Scott. But he’s careful not to over-rely on the social platform.

“Most people are not on Twitter and are not interacting with the press, so it’s Important not to misinterpret or overemphasize that audience,” he pointed out.

QUESTION: What is a journalist’s role, at this moment in history?

EUGENE SCOTT: To me, nothing about this moment changes what my role was two weeks ago.

It remains my responsibility to help people in the communities in which I report better understand these communities than they did before, by writing about parts of the community that they perhaps are not engaged in.

As someone who specifically writes about identity politics, I often find myself reporting on how politics and policy shape the lives of different groups of people based on their identities.

Often the individuals reading my work aren’t a part of those groups, don’t know anyone in those groups even, and are looking to the media to help them understand these groups.

When we talk about my experience being a Black reporter covering this current moment, these protests in response to police violence against people of color — I am always a Black man, no matter what I do. That perspective does shape my reporting. It doesn’t compromise my reporting. It enriches it. I have questions. I have context. I have historical background that makes the story deeper and more thorough for those who are reading it.

QUESTION: Is the grassroots uprising against police brutality around the country and the growing support nationally going to be an ongoing story in this country?

EUGENE SCOTT: Yes. Something is happening. Due to the amount of attention this is currently getting and more importantly, to some of the people involved in the conversation that previously were not.

In 2015, after Mike Brown was killed in Ferguson, Missouri [on August 9, 2014], most people in the streets were Black Americans. Young Americans. They were from inner cities or predominately Black towns.

In this current moment, we are seeing protests really in every single state. Some rallies without a doubt are predominantly white. Many rallies are multi-generational in terms of who is participating. 2012 Presidential candidate Mitt Romney marched on June 7 in D.C. We would not have seen this in 2015.

QUESTION: Does that make you optimistic?

EUGENE SCOTT: I’m generally an optimistic person. So, yes. I remain hopeful and inspired. Not naive or disconnected from the reality of a difficult situation. But I do think that America is a lot different for someone like me than it was for my dad and my grandfather.