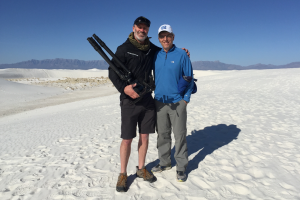 “It may surprise you to hear that we don’t cover issues: we tell stories that often illuminate issues,” executive producer Jeff Fager writes in his recently published book "Fifty Years of 60 Minutes." “But mostly, we tell stories.”

For close to two decades now as a producer for CBS’ “60 Minutes,” 11-time Emmy award-winning Draggan Mihailovich ’83 has been tracking down and telling stories for a living. “60 Minutes” founder Don Hewitt’s vision in 1968 was to package an hour of reality as compellingly as Hollywood packages an hour of make-believe. “60 Minutes” has been on the air ever since, with 107.75 million viewers over just the 2016–17 season. Showtime is every Sunday night.

“Draggan embodies the great tradition of the best in journalism,” said UNC Hussman School of Journalism and Media Dean Susan King, “and is another testament that the Hussman School prepares graduates to be on the front line of accountability journalism. There has never been a more important time for the kind of work he does.”

Mihailovich finds the stories and “60 Minutes” provides the time and the resources to tell them. Sometimes it takes less than a week, sometimes two or three years to put together each 12-minute piece. He and a small team, including his associate producer, a hired camera crew and a "60 Minutes" correspondent, go wherever the story takes them — to nine countries in the case of “Curve Ball,” one of his favorite Emmy-winning pieces (see sidebar below). When the team returns to West 57th Street in New York City, a "60 Minutes" editor helps them craft the raw footage into a story seeking Hewitt’s “Hey, Marge!” effect: that is, the story is good enough that you’d call Marge from another room to come see it.

‘Now, he has the best job in the world’

Mihailovich and his younger brother Zoran grew up in Chapel Hill, the sons of a UNC professor and his wife, both of whom emigrated from the former Yugoslavia after World War II and settled in the bucolic college town in 1961, the year their eldest son was born.

“I was kind of interested, but boy, the idea of being on the radio was one step too far for me,” he said.

Later, the teacher spied Mihailovich reading an old Sports Illustrated in the school library and convinced him to do the reports.

Longtime Chapel Hill businessman and journalist Jim Heavner was Mihailovich’s boss at the time. He remembers that his young charge had the goods. “The talent is there early,” said Heavner. “Charles Kuralt was Charles Kuralt when he walked into WCHL. Draggan was Draggan back in 1979.”

“Now, he has the best job in the world,” Heavner added.

As a freshman at Carolina in 1979, the young radio reporter stayed on the job between classes. He remembered that he and his J-school (now Hussman School) adviser, Carol Reuss, agreed that Mihailovich was learning a great deal about broadcasting firsthand. What he needed to do was learn how to write.

“That’s why I majored in journalism,” Mihailovich said. Today, he continues to emphasize the need for great writing skills. “Writing well is the most important aspect of this job.”

In his junior year, Mihailovich became WCHL’s color commentator for UNC football games and filled in for some 1982 and 1983 basketball games as well. Keeping up with the game day travel taught him about time management. He also found time to report for The Daily Tar Heel student paper, continue to broadcast for WCHL and complete his coursework, graduating in four years with a degree in journalism.

Gravitating to the great writers

His first post-graduation job was for The Chapel Hill Newspaper. But when his friend Rick Willenzik told him that ABC Sports was looking for researchers fluent in Serbo-Croatian and his J-school adviser encouraged him to apply, the paper gave him a leave of absence to follow that lead to the Olympics, as long as he returned in time for basketball season. He was offered a spot on the ABC team as a researcher for the 1984 Sarajevo Winter Olympics in what was then Yugoslavia. The catch was, the $750 job required him to shell out $704 to get to and from Sarajevo.

After Sarajevo, he knew what he wanted. He returned to Chapel Hill briefly, and then began a series of research jobs in broadcasting which led to a full-time chief researcher spot with ABC Sports in 1986, in preparation for the 1988 Calgary Winter Olympics in Canada. He’s been in network television ever since.

In Calgary, he was sports legend Jim McKay’s personal researcher. “[Jim McKay] was like an uncle to me,” Mihailovich said. “And he was so curious about the world.” Mihailovich reserved the highest praise for the best writers he’s worked with in his storied career, from Jim McKay to Charles Kuralt to Bob Simon and Steve Kroft. “I was lucky at first, but then I started gravitating to the great writers.”

He personally produced 16 of them, including the 35-minute “The Great Zamperini” with correspondent Bob Simon. Mihailovich had been researching a story about the 1945 Army football team when he came across a New York Times article from 1945 about a U.S. collegiate track athlete and Olympic miler who’d survived a World War II plane crash, 47 days on a raft and nearly two years as a prisoner of war in Japan. Laura Hillenbrand told the Zamperini story twelve years later in her book “Unbroken,” which was brought to the screen by Angelina Jolie in 2014.

CBS Sports ran “The Great Zamperini” for an audience in the tens of millions during CBS’ coverage of the closing ceremony in Nagano. The Emmy award-winning story of hardship, resiliency and forgiveness has had the biggest impact on Mihailovich’s life to date. He gained a surrogate grandfather in Louis Zamperini and got the attention of the “60 Minutes” brass, who had an opening on Steve Kroft’s team and had Simon talking up Mihailovich for the job. He joined the broadcast news magazine in May 1998.

Finding the story, making the pitch

At “60 Minutes,” the producer often seeks out which stories to pitch to senior staff. Mihailovich and his team are competing to get to the story before not just the rest of the news media, but also before another “60 Minutes” team gets its hands on it.

Mihailovich also has the right to turn down a pitch. He did not profile NBA star LeBron James eight years ago, because he felt there were not enough layers to the story yet. As his friend and colleague Bob Simon used to say to a story pitch: “That’s great. What’s the second line?” Of course, the senior staff can turn down a story, too.

Another story source was Clinton Colmenares, who had chaperoned a group of UNC journalism students during their visit to “60 Minutes.” Years later, Colmenares, now research communicator at Clemson University, emailed the producer about a nearly 100-year-old retired Clemson professor. That tip turned into “A Survivor’s March” about WWII veteran Ben Skardon, who marches in the Bataan Memorial Death March in New Mexico after surviving the 1941 forced transfer.

“I’ve got a stack of pretty good stories that would reach the ceiling,” said the producer. “Really good ones don’t happen that often.”

Once approved, the next time the senior team sees the story is in the screening room after Mihailovich and his team have shot and edited it.

Capturing the story, in words and pictures

They dig up information and continually fact-check the evolving story, aware that one dead end can lead to a canned story. “Can you imagine the fact-checking on ‘The Spy Among Us?,’” he pointed out. He was calling American corporations to confirm the KGB spy’s work history in the United States. "All they’d have to do is say ‘Who? No, he never worked here,’ and your story is done,” said Mihailovich.

Mihailovich also assembles the cast of characters, hires the camera crew, writes out the interview questions (which the correspondent may well rewrite) and goes on location, working with the camera crew to get B-roll footage before the correspondent gets on location. Correspondent interviews and more footage are filmed. Only after the team screens all of the footage they’ve shot does Mihailovich write the first draft of their script.

Sometimes, the correspondent will promptly rewrite the script, as was the case when the team — including Kroft — recently found themselves on the scenic Isle Of Eigg, a small island off the west coast of mainland Scotland that underwent a community buyout in 1997 and is now run by its just under 100 inhabitants. 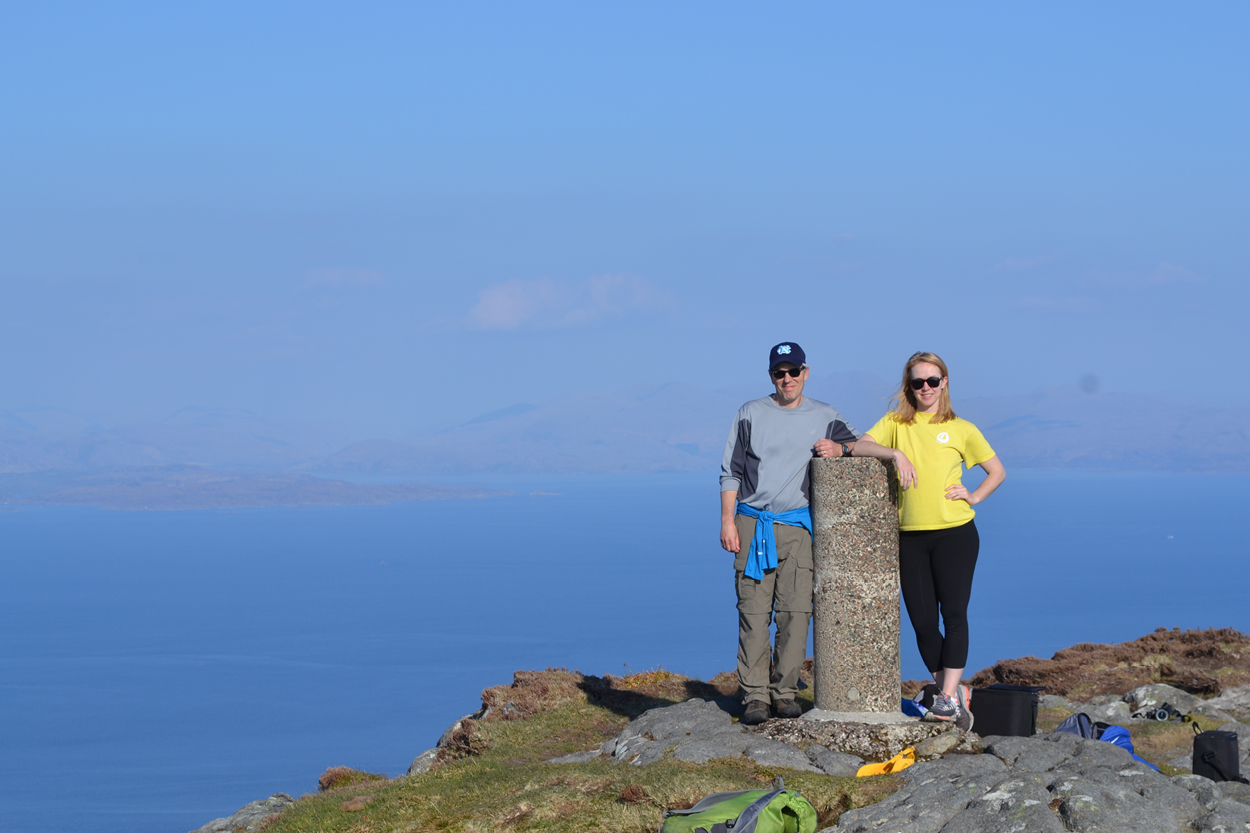 “I wrote the first draft, but he took it and turned it into something,” said Mihailovich. “There aren’t that many like him. It’s a rare gift. He totally transformed that piece.”

The parts can then be put together back at the office, with the help of a “60 Minutes” staff editor such as Warren Lustig, who edited eight of Mihailovich’s 11 Emmy award-winning pieces.

“The first time we see what we call the ‘radio cut’ on television — that’ll be just the sound bites and black holes with the narration, but we haven’t put the pictures together — it’s always too long,” he said. “We look at each other. ‘Why did we ever do this story?’”

Much cutting, shifting, rewriting and more cutting ensues and suddenly the story comes into view, ready to be reviewed by the leadership team, who often suggest more changes.

‘You’re only as good as your last story’

Once the piece has been finalized, the story is ready to air. The correspondent records the studio introduction for the top of the program, the accompanying magazine art is superimposed on the blue background behind them, and the piece is officially out of the producer’s hands. It’s on to the next story.

And the pressure can be relentless.

“Here’s my recurring nightmare,” he said. “I’m in the middle of Russia with two camera crews, my associate producer and Bob Simon. We’re standing on the street and Bob turns to me and says ‘What’s the story?’ I say ‘I’m not really sure, but if we walk around and maybe just ask some people, we’ll come up with something.’ And I wake up. That is the worst feeling. That is the modern-day equivalent of ‘I forgot to study for the final.’”

“You’re only as good as your last story,” says Mihailovich. “That’s what we say here at ‘60 Minutes.’”

Anxiety dreams notwithstanding, Mihailovich feels fortunate to have the career — some might say the calling — that didn’t even figure into his wildest dreams back in the Chapel Hill High School library. “I’m lucky,” he says simply, as he lines up what he needs to shoot his next piece, on Giannis Antetokounmpo, the NBA basketball phenom they call “The Greek Freak.”