America’s Shadow Wars and the Role of the Media: Mark Mazzetti and Adm. Dennis Blair speak at Hussman 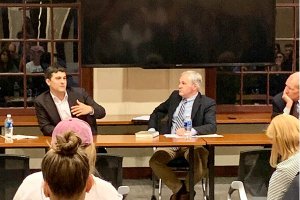 UNC Hussman and the Curriculum in Peace, War, and Defense demonstrated the power of collaboration within the UNC community this week with a joint lecture on national intelligence and reporting.

The Curriculum in Peace, War, and Defense focuses on fundamental issues of human conflict and national and global security and defense — all of which were central to the conversation.

The event was one of the most important of UNC Hussman’s ongoing Holding Power Accountable series, according to Hochberg. “It centered on covert intelligence operations, such as drone strikes, that kill and injure people in the name of the U.S. government,” he said. “Such operations may have a place in modern warfare; indeed, they represent one of the few Obama policies that President Trump has endorsed. However, they are carried out by intelligence agencies that operate with even less scrutiny and oversight than the Pentagon does, and they are specifically designed to provide the government and politicians a layer of deniability.”

UNC Hussman established the Holding Power Accountable workshops in 2009 to provide aspiring investigative journalists with inspiration and coaching. The workshops evolved into an annual series of conversations between journalism students and top professionals.

Blair and Mazzetti gave students insight on wrestling with that issue in their professional lives. Mazzetti — whose work for The New York Times and bestselling book, "The Way of the Knife," investigated the CIA’s drone program in Pakistan — described the painstaking process of trying to report and confirm classified information. Blair, who was the nation’s first director of national intelligence under President Obama, was frank about the role of the intelligence community in the reporting process, acknowledging that the CIA sometimes used classification for hiding information for political reasons, noting that the Pakistan drone program was one such example. He revealed a question that he tried to ask himself while in leadership. “If this came out, would we be able to defend it?” he said. “Leaders shouldn’t be doing covert action that’s completely at odds with what we have as a policy.”

Mazzetti noted that reporting was similar to intelligence work in many ways and described the difficulty of cultivating sources inside the intelligence community. He also discussed the ethical question of reporting leaks of sensitive information, encouraging students to highlight the importance of the media in those cases. “Let us decide what we think is newsworthy, and we’ll treat it responsibly,” he said.

Asked by students about the biggest national security threat facing the United States today, Blair and Mazzetti both pointed to the current political climate and polarization throughout the government. Blair warned that dysfunction in Washington could damage America’s moral standing abroad and said the country needed to come together over key national security issues. Mazzetti warned that political dysfunction can become exhausting for those who cover the government every day. But he urged students to keep pursuing information because this period of American political life is “energizing” for reporters and an opportunity for the news media to prove its worth.

“It was an excellent forum to talk through some of the complex issues surrounding covert intelligence operations and the ethical issues faced both by the journalists who write about them, and the government and military leaders who are involved in them,” Hochberg said.