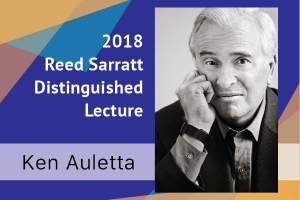 Ken Auletta, staff writer for The New Yorker and author of 11 books, will deliver the Reed Sarratt Distinguished Lecture at the UNC Hussman School of Journalism and Media on Tuesday, Oct. 23, at 4 p.m. in 111 Carroll Hall.

In his most recent book, "Frenemies: The Epic Disruption of the Ad Business (and Everything Else)," Auletta considers the $2 trillion global advertising and marketing business, and reports on the many newspapers, magazines, TV and radio stations — as well as digital enterprises — it supports.

In the keynote lecture, entitled, “Frenemies: Winners and Losers in the Advertising Wars,” Auletta will examine the age of disruption — from the perspective of advertising’s most powerful players, and through the lens of the “frenemy” relationships now shaping the industry’s future.

“We are in an age of profound disruption in the advertising and marketing industries,” said Auletta. “It’s critically important that students at a top program like the UNC Hussman School of Journalism and Media understand the changes and the dynamics that drive them. They will need to be prepared to adapt in order to lead amid the turmoil.”

Kayye’s students are reading Auletta's book this semester. He said the book "perfectly addresses where we are and where we are likely headed with the distortion of all media. And, as a professor (and consumer) of new media, this is perfectly topical to everything I am teaching in my advertising classes today."

BusinessWeek has called Auletta “the James Bond of the media world.” His interviews and commentary have provided a roadmap for where society has been and where it’s going. In ranking him as America’s premier media commentator, the Columbia Journalism Review concluded, “No other reporter has covered the news communication business as thoroughly.”

Auletta has served as a Pulitzer Prize juror, been named a Literary Lion by the New York Public Library, has for several decades been a National Judge of the Annual Livingston Awards for Young Journalists, and was selected one of the 20th century’s top 100 business journalists by a distinguished panel of his peers.

“We want all of our students to be exposed to the radical changes underway in all phases of media,” said Susan King, dean of the Hussman School. “Ken Auletta has chronicled the disruption in journalism and now for the advertising industry. His presentation can challenge our students to look deeper at the trends in the professions they are preparing to enter.”

A native of Charlotte and a 1937 graduate of UNC, Sarratt served as the inaugural president of the School's Journalism Alumni and Friends Association. He was inducted into the N.C. Journalism Hall of Fame in 1985.