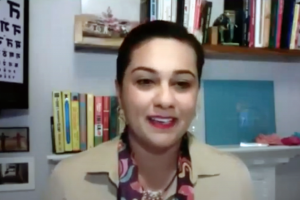 UNC Hussman School of Journalism and Media graduate Anu Anand ’95 was one of six University of North Carolina at Chapel Hill graduates to receive a 2020 UNC Chapel Hill Distinguished Alumna and Alumnus Award in a virtual ceremony held on University Day, Monday, October 12. Chancellor Kevin Guskiewicz presided over the presentation. The prestigious award was created in 1971 by resolution of the UNC faculty. It recognizes outstanding contributions to humanity made by some of the 342,000 Carolina alumni around the world. Past recipients with journalism connections include Nikole Hannah-Jones ’03 (M.A.) in 2019, Jacqueline Charles ’94 in 2015, Betty Debnam Hunt in 2015, Walter Hussman Jr. ’68 in 2009 and Roy Park Jr. ’61 in 2005.

An anchor and reporter for the BBC World Service from London, Anand has reported international news for The Guardian, The Associated Press, CNN, Al Jazeera and other major news organizations. Most recently, she was the launch anchor for the global edition of Marketplace Morning Report from the BBC World Service. Secretary of the Faculty Professor Vin Steponaitis joined Guskiewicz in presenting the awards and noted in particular Anand’s reporting on “the colossal economic and social changes over the past decade in India, the world's biggest democracy.” The Hussman graduate was recognized in 2019 with the Asian Women of Achievement Award in media, which she pledged to use to create a more diverse pipeline of talent at the BBC World Service.

“For her outstanding contributions in journalism,” Guskiewicz declared, “the University of North Carolina at Chapel Hill is pleased to confer on Anu Anand this distinguished alumni award. Congratulations, Anu.”

In her eloquent remarks — which begin at 5:18 into the video — Anand wove the story of her life in journalism.

“In 1995 I attended graduation alone,” she began. “My parents and I were estranged over my life choices. As a different-looking kid with a different-sounding name, I just didn’t know myself, or my place in the world. Still, my Carolina degree gave me the skills to travel to India, where I was born, to work as a journalist.”

In a career that began with the young journalist earning 1 rupee (1 cent) per word, Anand spoke of learning resilience and perseverance.

“As an outsider in British newsrooms,” she said, “I learned that I didn’t have to fit in to succeed.” When she was denied a job, “I learned how to be a ‘do it yourself‘ foreign correspondent,” she shared, “and just do it anyway.”

Anand closed her remarks by noting that “As the grandchild of refugees and child of immigrants, I’ve inherited plenty of disruptions. But journalism has allowed me the opportunity to learn my history and my place in the world.”

“This Carolina award is my happily-ever-after. It recommits me to the grand democratic tent of storytelling and of public broadcasting,” she said.

Anand recognized mentors and colleagues from UNC-TV alongside BBC and Marketplace in her closing comments, and later noted longtime broadcaster Shelly Leslie ’89 at WRAL for playing a part in shaping her career path.