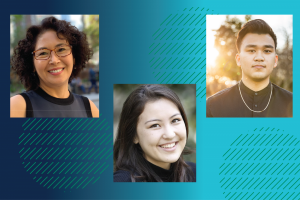 Below, you'll see excerpts of the conversation, which happened over Zoom.

A native North Carolinian of Korean descent, Lee is the founder and president of Point Made Films, a documentary film production company focused on telling stories about the many layers of American identity. She is also the founder and president of Point Made Learning, which creates and offers organizations anti-discrimination products and services based in storytelling. A former member of the school’s Board of Advisers, Lee was named the 2015 recipient of the University’s Alumni Diversity Award, the same year she gave the school’s commencement address. Last fall, she served as the school’s Barry Saunders Visiting Professional, a professional-in-residence program established at the school in 2018 to enrich the diversity of perspectives for Hussman students.

Consing is a visual journalist working with FiveThirtyEight in New York City. He was raised in western North Carolina by parents who had immigrated from the Philippines. While at Hussman, he was named the 2021 White House News Photographers Association's Student Video Photographer of the Year. His documentary work has been screened at events around the country. He was a finalist in the 2021 individual multimedia national championship at the Hearst Journalism Awards.

Davison, a May 2022 graduate of the school, was named the school’s John R. Bittner Outstanding Graduating Senior in Journalism. Also a visual journalist, Davison’s work often explores her Japanese ancestry, such as a piece she created on the conditions of working women in Japan, which won her the Best Multimedia Story of the Year award from the 2021 Hearst Journalism Awards. She won the 2021 Hearst national championship in multimedia.

How do our alumni define their Asian American identities? Growing up, Consing often got the question: “Where are you from — where are you really from?” He’d answer by saying his family was from the Philippines, but he avoided thinking about race too deeply until he came to UNC. Rooming with several Asian American roommates created new opportunities for his exploration of what it meant to be an Asian American. For Davison, high school marked the first time she began to think about her biracial identity. What did it mean to be her when she couldn’t “check” either the white or Asian American box?

Click below to watch Consing, Davison and Lee discuss what being Asian American means to them.

How does their Asian American heritage filter into our alumni's choices as storytellers? All three have explored aspects of their Asian American heritage in their work, but even their core perspectives as storytellers are influenced by their heritage. Davison knows what it’s like to not see yourself represented, so she’s always looking out for other people who feel the same. “A lot of the themes that I try to pursue in stories are 'Where are the voices that are being silenced or shut out?'” she said.

Click below to watch Consing, Davison and Lee discuss how their heritage influences their storytelling.

Click below to watch Consing, Davison and Lee discuss the Asian American storytellers who have influenced them.

What Asian American and Pacific Islander stories are each of them loving right now?  Consing and Davison both told Lee she needed to see “Everything Everywhere All at Once,” a 2022 science fiction film weaving through the different lives that an Asian American woman could have lived. “It was just a really powerful story,” Davison said. “All the people I went and saw it with were crying, couldn’t handle their emotions, and it was like a beautiful moment where I saw that representation matters so much.” Lee recommended “Pachinko,” a film exploring a Korean family’s immigration to Japan. Consing gave a thumbs up to “Minari,” which portrays a Korean American family attempting to make it as Arkansas farmers, saying that the film’s exploration of immigration reflected themes of his own family’s experience. “That [film] really made me see my parents’ story … it also really inspired me to continue making stories about my life, about people who look like me.”

Click below to watch Consing, Davison and Lee discuss the Asian American and Pacific Islander stories they're loving right now.