The Bridge’s #21Under21 campaign highlights female student leaders of color 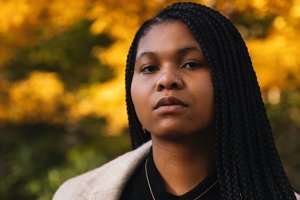 UNC Hussman students, along with the entire Carolina community, have faced challenges during the COVID-19 crisis, and have met many of them with innovation and ingenuity. On the week of the last day of classes (follow #UNCLDOC2020 on social media), we’re sharing some of those stories. Below, UNC Hussman Ambassadors Program Manager Vanessa Agunobi explores a campaign started by a Hussman student to celebrate women of color on campus — virtually.

The Bridge is an online publication that seeks to provide women of color the opportunity to showcase their creative talents. In March of 2020, in celebration of Women’s History Month, Editor-in-chief Ruth Samuel ’21, a UNC Hussman student and journalism major and Hispanic studies minor, launched the publication’s inaugural #21Under21 campaign, honoring 21 women of color student leaders who are 21 years old or younger. I, along with 20 other ambitious women of color, was able to participate and showcase the impactful work we do on UNC’s campus. UNC Hussman student Hanna Wondmagegn ’21 took all the photos. The campaign featured three other UNC Hussman students: Elizabeth Howard ’21, Caitlyn Kumi ’21 and Patsy Montesinos ’21.

Samuel and her team started work on the campaign early in the semester, and though it was to take place online, primarily on Instagram, they depended on in-person meetings and strategy sessions to put it together. When the lockdown from COVID-19 hit, the team had to consider how to rework their rollout. The team members faced unprecedented struggles, but they were determined to get their message out. I reached out to Samuel to learn more about how the team managed to continue the execution of the project despite the rapid workflow pivot.

Ruth Samuel: The whole campaign started in January. I was talking to Hanna Wondmagegn, one of our content creators, and we were talking about this idea of honoring wonderful women of color on campus throughout March’s Women’s History Month. We just thought of it as a perfect way to shed light on the women of color that are trailblazers on this campus and keep this campus afloat. We find that we are doing so many wonderful things. We’re representing our communities, and we’re expressing our womanhood in so many diverse areas — but people on campus don’t know how integral women of color are in certain programs. Whether it’s helping create the E-ship Scholars Program, sitting on the board for the Department of Dramatic Arts, or being the first Native American student body president that UNC has ever had. Therefore, we wanted to highlight them because we know that we have all this power, but even our own communities don’t know what we’re involved in.

The impact of COVID-19

We started the social media rollout on March 16 — that was four days following the announcement of our spring break extension. We were thinking that we were going to go with it as planned since it was mainly a social media-based campaign. So we did the photos in March, then Hanna went to Belize, and she got the photos back to us in a timely manner. ...

But even with our content creation, we had to take a pause because some of our members were forced to move off-campus in an entire weekend — that’s a lot. The Bridge had to take a break and resume on April 1. We had to give our out-of-state staff writers time to get adjusted, especially people with different home situations and home lives. So we did take a toll there.

Why was it still important?

We made sure that this kept going as planned just so that these women understand that they are cherished and that their work doesn’t go unnoticed. We started rolling it out on social media from March 16 through March 31. I think that potentially it could have uplifted some people. It could have made people realize, “Oh wow, we have very impressive women on this campus, and I appreciate that.”

Keeping the community together

This pandemic has forced us to think differently about the way we maneuver as a community. Some of our programming was canceled. We were supposed to partner with the Beta Lambda chapter of Omega Phi Beta Sorority Incorporated, a Latina-oriented sorority here on campus. Jaylene Cruz ‘21, one of our staff members, is a part of that organization, and we were supposed to have a Donuts for Domestic Violence Awareness event with them in the Pit, but that is now canceled. And so it’s things like that.  Even our on-campus programming for Asian Pacific American Heritage Month (which formally takes place in May, but we were going to celebrate before LDOC) has now taken on a digital format. I think that we’re trying to do things kind of virtually — like a Netflix party. As one last hurrah, where the staff watches a movie that we love together, and we can comment on it. We are going to do what we say we need to do and honor these women. We can’t let COVID rob us of that. We are going to need a Women’s History Month do-over at some point!