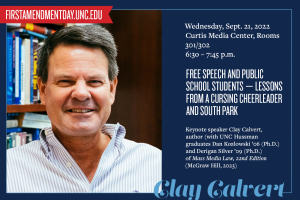 Congress shall make no law respecting an establishment of religion, or prohibiting the free exercise thereof; or abridging the freedom of speech, or of the press; or the right of the people peaceably to assemble, and to petition the Government for a redress of grievances.

It’s back on campus!

First Amendment Day is an annual campus-wide, daylong event designed to both celebrate the First Amendment and explore its role in the lives of students at the University of North Carolina at Chapel Hill. Observed during National Banned Books Week, the Carolina tradition was first celebrated in 2009 — the year Kanye West interrupted Taylor Swift during her VMA video of the year acceptance speech and the UNC women’s soccer team won their 20th NCAA national title.

After a pandemic-related virtual format in 2020 and 2021, the celebration is back on campus Wednesday, Sept. 21, and UNC Center for Media Law and Policy co-faculty chairs David Ardia, Reef C. Ivey II Excellence Fund Term Professor of Law at UNC School of Law, and Amanda Reid, Associate Professor at UNC Hussman School of Journalism and Media, have packed a powerful punch — with events that reflect contemporary conversations and up-to-the-moment scholarship.

Events include a student debate in the Freedom Forum; a virtual trivia contest (Question: who said “I know it when I see it,” about pornography? Answer: U.S. Supreme Court Justice Potter Sewart in 1964 Jacobellis v. Ohio); a banned books reading; and what should prove a thought-provoking keynote speech entitled “Free Speech and Public School Students — Lessons From a Cursing Cheerleader and South Park” by University of Florida Professor Clay Calvert, who literally “wrote the book:” Mass Media Law, 22nd Edition (with UNC Hussman graduates Dan Kozlowski ’06 (Ph.D.) and Derigan Silver ’09 (Ph.D.).

Calvert says, “Undergraduates should come to learn about the First Amendment speech rights of public high school students — something many of them were just a few years ago. It’s a particularly important issue in the social media era when we've witnessed students being punished for their off-campus, online tweets, posts and snaps. It’s also important because some principals overreact and try to silence anything that arguably might harm the reputation of their schools.”

In addition, three panel discussions offer a veritable plethora of professional expertise on three important aspects of the First Amendment, including:

• U.S. and European Approaches to Regulating Social Media Platforms, with legal and social media experts from Carolina and the University of Helsinki. Moderated by Anne Klinefelter, UNC Law professor and director of the law library.

• Get 1A Smart: Having Your Say & Staying Out of Court, with nationally known media lawyer and litigator Hugh Stevens ’65, ’68 (J.D.) joined by journalists from The Assembly, WRAL-TV and UNC Center for Innovation and Sustainability in Local  Media. Moderated by Duke Law’s First Amendment Clinic’s Amanda Martin and Ben Rossi.

• Weaponizing First Amendment Rhetoric, which asks the question “Should free expression be what we value beyond everything else in public life, namely progress, equality and inclusion?” Four panelists from the UNC Center for Information, Technology and Public Life tackle the topic and consider alternative ways of thinking about expression to reclaim our shared public life. Moderated by CITAP research fellow Nanditha Narayanamoorthy.

All events are free and open to the public. Check firstamendmentday.unc.edu for the most up-to-date information.