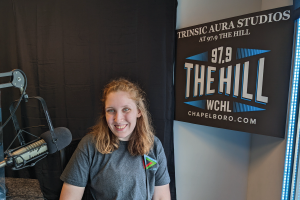 When the news of Roy Williams’ retirement broke on April 1, 2021, the team at Carolina Connection, UNC Hussman’s student-run radio show, went to work.

They had just hours to piece together the story of the UNC men’s basketball coach’s illustrious career.

But they did it — so well that the prestigious Society of Professional Journalists (SPJ) recently honored the Williams-focused show, as well as Carolina Connection and its students, in the SPJ’s annual Mark of Excellence Awards recognizing collegiate work published or broadcast during 2021.

At right, Ava Pukatch '22, part of the Williams retirement show team, is pictured at a Chapel Hill radio job she took after graduation.

“These wins speak to the talent and drive of the Carolina Connection team,” said Hochberg, a veteran radio journalist who, in addition to teaching at Hussman, works as editorial director for the American Homefront Project and previously worked 15 years with NPR.

During 2021, much of Carolina Connection’s award-winning work centered around COVID-19 and its myriad effects on the campus and surrounding community, from obstacles on the job faced by UNC housekeepers to students’ mental health.

And as much of the University operated remotely during the pandemic, so did Carolina Connection, further challenging the students as they produced weekly radio shows from their homes, Hochberg said.

Ix heard about the SPJ wins in California, where she works as an assistant at a Los Angeles talent agency, helping actors coordinate everything from headshots to auditions. She harbors dreams of working in film development one day — not as far removed from radio work as one might think, she said.

“I want to find good scripts and help movie projects get off the ground. Basically, I want to be a storyteller, and Carolina Connection taught me how to do that,” said Ix, whose work on how the COVID-19 pandemic exacerbated eating disorders placed her as a Mark of Excellence finalist.

Ava Pukatch ’22 heard that she was a Radio Sports Reporting finalist right before she headed off to WRVO Public Media in Oswego, New York, where she starts work as a reporter and producer in September 2022. Previously, she worked as a social media producer at 97.9 The Hill WCHL in Chapel Hill, a radio job that her involvement with Carolina Connection helped her get.

Not only does Carolina Connection produce stories weekly that populate its website, the stories also air every Saturday on WCHL.

“Carolina Connection really taught me the ability to adapt quickly, which is important in radio work because no two days are alike,” Pukatch said. “Like the Roy Williams show. We woke up that day thinking we were going to do a show about COVID-19 vaccines. We had to regroup very quickly.”

Aurora Charlow ’22, Zach Engler ’22 and Ben Rappaport ’21 were also part of the team honored by SPJ for the Williams story.

Teaching students the ability to think fast and produce innovative stories is critical and are skills they’ll use throughout their careers, Hochberg said.

“In the 21st century’s 24-hour news cycle, journalists have to give people more than what they’ve already read about on their smartphones,” Hochberg said.

Rappaport remembers Carolina Connection lessons every day in Chatham County, North Carolina, where he works as an education reporter for the Chatham County News + Record.

Also on the Williams retirement show team, he knows his time at Carolina Connection strengthens his current role, even if he’s working in print not radio.

“The big things I learned were how to work on deadline and how to do whole stories in a day. My training with Carolina Connection proved to myself and various editors that I can produce content well, and I can do it in a timely fashion,” Rappaport said. “These honors from the SPJ are a great reminder of how my time at Hussman prepared me for the work I’m doing now."