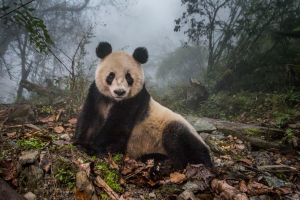 UNC Hussman School of Journalism and Media graduate Eileen Mignoni ’09 (M.A.) and 1994 Carolina graduate Ami Vitale have combined forces to develop a woman-led nonprofit called Vital Impacts. The Montana-based organization supports grassroots organizations who are protecting people, wildlife and habitats. Through December 31, 2021, vitalimpacts.org is offering their first annual fine art print sale of works by Jane Goodall and 99 other widely respected fine art and nature photographers, including works like “Yeye in the Mist” by Vitale, at right. During the inaugural sale of these breathtaking archival prints, 100% of net proceeds go to four conservation organizations (60%) and to the photographers (40%) to help them continue their awareness-raising conservation work.

Vitale is an award-winning National Geographic contract photographer, filmmaker, writer and public speaker and a Nikon Ambassador who holds workshops around the world. She’s a founding member of Ripple Effect Images, a nonprofit collective whose work highlights aid groups that empower women and girls. Her photo of caretaker JoJo Wachira saying goodbye to the last male northern white rhinoceros in the world was voted best photo of the decade by National Geographic readers in late 2019 and one of the 21 most important images of the last century. 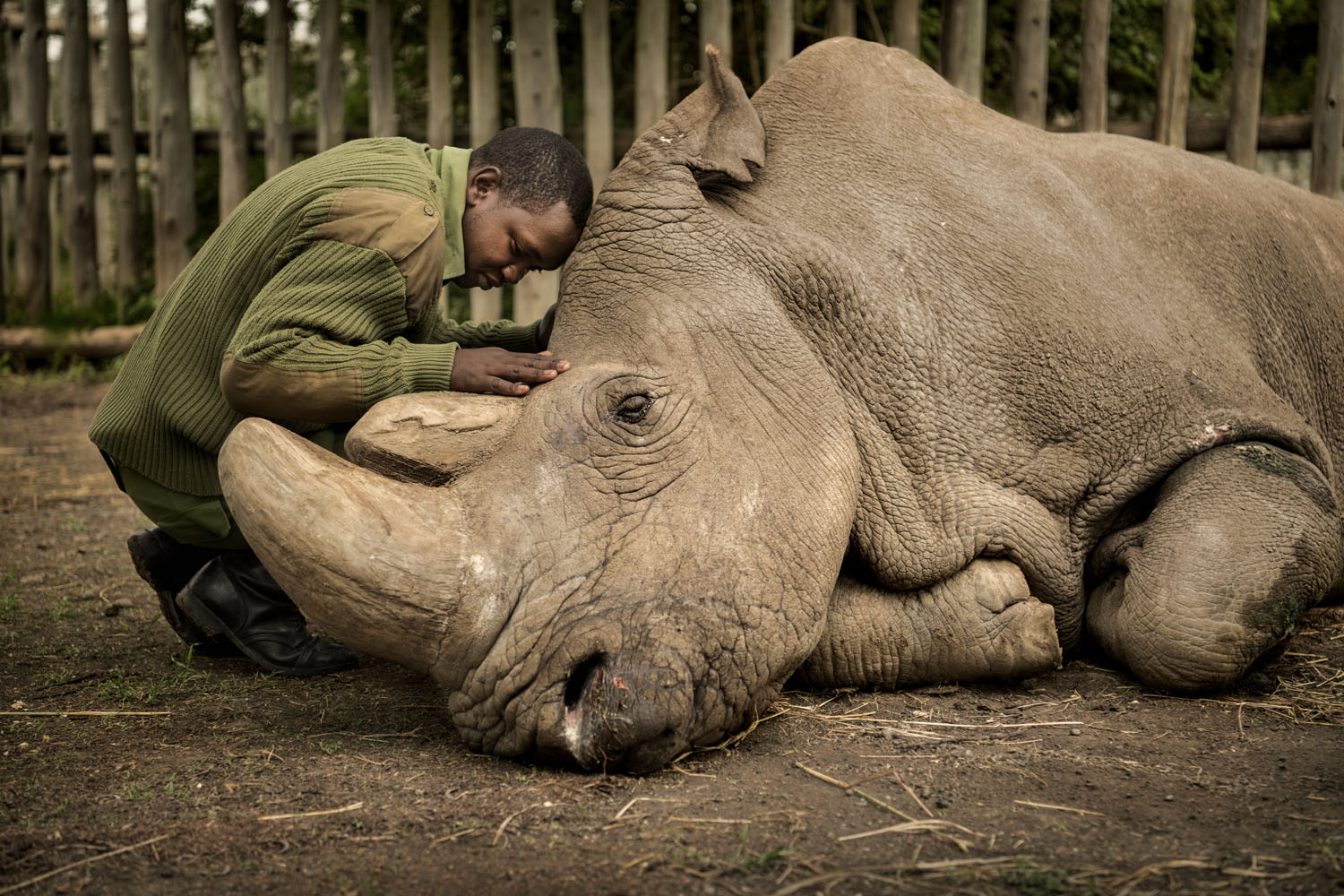 A Fort Lauderdale, Florida, native who planned to study engineering, Vitale made a last-minute decision to follow her heart away from that field, accepting an offer from UNC-Chapel Hill — where her brother was a student — on the day before orientation began in Chapel Hill.

“My whole life is a state of constant movement,” Vitale says now from her home in Montana. “It began that August, when I flew home from my summer job and got on a plane for Chapel Hill the next morning.”

An international studies major at Carolina who has since traveled to more than 100 countries, Vitale has a soft spot in her heart for the J-school. It’s where Professor Emeritus Rich Beckman, who directed what was known as the visual communication program at the school, found room for her in his photography classes and first helped guide her path as a photographer.

Of that time, Beckman says, “It was obvious early on that Ami was very talented. She had the passion and drive to succeed.” He says it was a pleasure to have non-journalism majors like Vitale in his classes, whose diverse backgrounds exposed students to other points of view. Still in touch with Vitale and many other former students from a groundbreaking career with UNC (1978–2008), the University of Miami (2008–2018) and Arizona State University (2018–2021), Beckman points out, “Now Ami is one of the very best photojournalists in the world.”

“Rich is my single-handed alumni connector, to this day,” says Vitale. “His posse is still connected, and some of them are my closest friends. Rich is one of the most selfless, hardworking people I know and he has cultivated that sensibility among his students,” she says of J-school alumni like Noor Photo Agency photographer Andrea Bruce ’95;  Mexico-based photojournalist and filmmaker Janet Jarman ’89; and Carolina business administration alumna Susie Post-Rust ’84, a longtime National Geographic photographer before she returned to Durham, North Carolina, to teach.

Vitale graduated from Carolina in 1994 and built a career first as a photo editor at USA Today and the Associated Press (AP). She left AP in 1997 to move to Prague, and went from editor to photographer covering the war in Kosovo at the end of 1998. In 2000, she traveled to Guinea-Bissau for six months — where her sister had served in the Peace Corps — on a photojournalism grant from the Alexia Foundation.

In her 2019 talks “How To Photograph Hope” and “Creator Sessions with Ami Vitale” (seen by hundreds of thousands via YouTube), Vitale says the experience in West Africa was a turning point that transformed how she looked at the world.

She went on to spend a decade covering breaking news in conflict zones around the world, living the peripatetic life of a global photojournalist, documenting human conflict, suffering and poverty with a deeply empathetic eye in places like Kosovo, Kashmir and Angola.

She speaks openly about the challenges of at times being rejected as a woman in what was still a man’s world in photojournalism, and at other times finding herself on assignment in conservative cultures that blocked her participation. Witnessing the horrors and brutality of humanity also had an impact on her.

“Those were some of my darkest moments,” she recalls now. “This was a difficult period in my life. I felt stuck. Some days I didn’t want to get out of bed. Witnessing so much suffering takes its own emotional toll. I couldn’t see what the future held.”

Today, she says she is grateful for those challenging moments. Without diminishing the despair of others, she says they were her most significant opportunities to transform and reimagine herself and her work. She is inspired by people like Jane Goodall, who writes about her stubborn optimism in “The Book of Hope: A Survival Guide for Trying Times.”

In 2009, Vitale began following four northern white rhinos being returned to Africa from a zoo in the Czech Republic became one of those transformational moments. At the time, only eight of the majestic creatures existed in the world. All were in zoos. Today, the remaining two female white rhinos are surrounded 24/7 by armed men guarding them from poachers because of the value of their horn. Vitale shifted her focus to today’s most compelling wildlife and environmental stories, eventually capturing the death of the last living male northern white rhino in the arms of his caretaker.

Since then, she has used her photography and filmmaking to seek stories of hope. She spent three years researching and photographing giant pandas in China, which culminated in her book “Panda Love: The Secret Lives of Pandas.” In particular, her work has focused on the indigenous caretakers and their relationship to wildlife and connection with the planet. Her recent short documentary film “Shaba,” about the first matriarch of the Reteti Elephant Sanctuary, is a case in point.

“Ami’s work bridges the gap between humanity and the natural world,” says her Vital Impacts partner, Eileen Mignoni. “She sees the relationship between the people who are working so hard to save and protect a species, and the animals. She documents the bonds they have formed and brings a level of empathy that wasn’t seen in the field of wildlife and nature photography before she arrived.”

At the Alexia Foundation whose grant had sent Vitale to Guinea-Bissau, she met a J-school graduate, Eileen Mignoni ’09 (M.A.), who served as communications director at the Foundation from 2012 to 2020. When Nikon asked Vitale to build her social media presence in 2014, Mignoni brought the coding, research, and audio/video storytelling skills she’d learned at Carolina to help build the amivitale.com site and a robust social presence that now includes 1.3 million Instagram followers.

“Eileen was great,” Beckman says of Mignoni’s student days. “Extremely talented and ambitious, and wanted to learn everything, the kind of curious person that you love to have as a student. She embraced it all. She said, ‘Coding? Web design? Research? Bring it on.’” He points out that in the fast-moving media and journalism industry, every generation of UNC Hussman students graduates with a set of skills that didn’t exist when the previous generation matriculated.

Vitale and Mignoni have been partnering for a decade now, first about the Alexia Foundation and since 2013, on Vitale’s work and initiatives. In her communications work for Vitale, Mignoni coordinates not just the website and social platforms but also newsletters, blogs, and the fundraising work that Vitale does for conservation nonprofits — including building an online presence for the community-owned Reteti Elephant Sanctuary in northern Kenya. Together and through her own fundraising initiatives for Reteti and for the Ol Pejeta Conservancy, Conservation International and several other wildlife and conservation organizations, Vitale reports that they have raised more than $3 million.

Today, Mignoni is the chief operating officer of Vital Impacts, which is planning more programs to empower indigenous storytellers around the world.

“I can’t think of anything more important than what is going on with our planet right now,” says Mignoni, who credits the multiplicity of skills she learned at the J-school with preparing her for a career that suits her perfectly.

“My son will occasionally ask me why my husband and I work,” she says. “How great it is to be able to say to make the world a better place, and have it be true.”