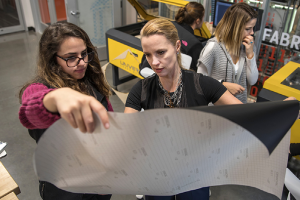 Dana McMahan knew something was missing.

When she first arrived at the UNC Hussman School of Journalism and Media in 2008, she was inspired by the creative energy within the walls of Carroll Hall. McMahan, a longtime advertising and marketing creative, knew what it looked like to harness that energy into powerful real-world work.

But she also knew the school lacked a space for students to enact their ideas and fully execute them — to create portfolio-ready work with real clients.

What it lacked was Workroom.

So, in 2009, she founded it — a product and experiential design incubator in the Hussman School centered around fashion and lifestyle products. Classes within Workroom became laboratory-like settings for students to pit their wildest ideas against creative constraints, and support from various foundations followed suit.

“We have all kinds of latitude and freedom to really be open and test the waters,” McMahan said. “And that comes straight from our mission to make this a place where we can do that.”

In 2016, those constraints loosened with a $1 million grant from the Goodwyn Family Foundation to create “Workroom: FashionMash,” an additional branch in McMahan’s Workroom courses that would bolster Workroom’s fashion-related experiences and portfolio work.

McMahan is the perfect one to lead it, with three decades of experience as an advertiser, marketer and creative director. She’s worked with big-name brands such as L’Oreal, Tiffany & Company, Coca-Cola, and she’s aided small nonprofits in the community. She’s the creative director for the UNC Office of Innovation, Entrepreneurship and Economic Development and the chief marketing officer for TOPO Brands. Plus, she’s an award-winning professor of the practice in the Hussman School — recipient of the 2011 Ed Vick Prize for Innovation in Teaching and the 2014 David Brinkley Teaching Excellence Award.

And, of course, she’s the mind behind the program giving life to the fashion and lifestyle dreams of UNC students.

"She is the most unique professor I think I'll ever have," junior Brooke Murad ’19 said. "You couldn't find a nicer person to work with."

It was a scene as elegant as the brand: a pop-up Cartier museum nestled high above Franklin Street.

The venue — a 2,500 square-foot space that was once used as McMahan’s office — was teeming with more than 100 people, weaving past one another during the hour-long exhibition on Thursday, Dec. 14, 2017. It was the product of a semester’s worth of work for students of McMahan’s Fall 2017 class, “MEJO 650: Workroom FashionMash Experiential Design.”

This big reveal is a crucial component of McMahan’s classes. Each fall, students in her experiential courses use this space to construct a physical build-out: ranging from a retail store to a sock-sliding runway to, now, a museum instillation. Each spring, students in her design class assess the space and augment it with new layouts or products. And then, at the end of each year, the project is torn down and the walls are painted white.

“It is the living definition of a blank canvas,” McMahan said.

But on this night, this space, adorned with the history and highlights of the iconic fashion brand, was fit for royalty. Students spent most of their class time in the Murray Hall makerspace pairing power tools with grand ideas — constructing everything from necklaces and laser-cut panther rings to vinyl adhesives and quotes for the walls.

“If you can dream it up,” McMahan said, “we’re going to figure out how to build it.”

Outside of class, they’d paint the walls of the exhibition space, prepare the display of luxury fragrances and pose as famous celebrities for the “icon room,” an immersive video experience showcasing the influence of Cartier apparel through the years. And don’t forget the interactive timeline feature that greets every guest as they walk in the door.

Murad, an advertising and political science double major, had never been so involved in a course. That Fall 2017 FashionMash course was her first with McMahan, and it served as an academic introduction to the advertising creative world that Murad hopes to someday work in.

McMahan says taking all three courses gives students a deep immersion in the creative industry. And after what she learned from McMahan in her first course, how could Murad stop there?

"She's just able to have this enormous vision of the final product that I couldn't even fathom half the time,” Murad said.

Spring 2018 students are working on a streetwear line for Cartier — creating it, publicizing it and promoting it with a fashion show in that same Franklin Street workspace on Saturday, April 21, at 7:30 p.m. This reveal is even bigger yet, with Cartier representatives flying in from Paris to see it.

Projects like these are invaluable talking points in interviews, Murad says, and all of the hours she and her classmates invest make the fruits of their labor that much sweeter. McMahan says her students often put Workroom at the top of their resumes.

"We want these projects to be portfolio pieces for students,” McMahan said. “We want students to be able to go into the industry and say, 'This is what I've done.'"

McMahan estimates that 500 students have contributed to the 2017-18 final product — students from both fall and spring semester classes, as well as those in the FashionMash club. And every guest will be rewarded with the newly printed Spring 2018 edition of Coulture Magazine, a student-led publication for which McMahan is an adviser.

"The final product definitely has a piece of each of us in it,” Murad said.

In McMahan’s vision, Workroom is the “something else” in each student’s day.

It’s hardly a lofty goal. McMahan’s students say her classes are the most hands-on courses they’ve taken at UNC; she jokes that there aren’t many classes that use power tools as much as hers do. The course projects replicate the real world as well as any course can. And the fully funded travel experiences are unlike any other.

In Fall 2017, FashionMash students took a trip to New York City, where they met with representatives of Bergdorf Goodman and the Cartier Mansion — both on famed Fifth Avenue — to learn about presentation and showcase strategies for luxury retailers.

In Spring 2018, students in FashionMash traveled to Italy to learn about the history and global diversity of fashion and lifestyle. One moment, they’d meet with a company working on sustainable textile design around eco-friendly materials; the next, they’d be in the Leonardo da Vinci Museum studying ancient ball-bearing devices that are still used today.

"It's kind of surreal,” said India Simpson, a senior in McMahan’s Spring 2018 FashionMash course. “You couldn't get it anywhere else."

It’s not purely academic, either. McMahan serves as the creative director for Innovate Carolina, an initiative that works to strength the university’s innovation network. In October 2015, the initiative caught local attention when members installed six wooden enclosures on campus to bring awareness to global topics such as health, music and engineering for the 2015 Chancellor’s Innovation Summit.

It’s McMahan’s vision they draw from, her directive they follow, and she ensures each student has a job tailored to their interests and is invested in the work they’re doing. She’s just as invested in her students’ work, too, and it shows in the final product.

"Every project has to have its creative constraints,” McMahan said, “but the goal is to get it out of everybody's head and into the physical world."

McMahan remembers one semester when her students decided to make handbags for an Italian leather shoe company — even though none of the students had ever cut leather before. By the end of the course, she jokes, they had all become expert leather cutters.

"We've done classes where there's been more sawdust in the classroom than tables and chairs,” McMahan said.

For the Spring 2018 exhibition for Cartier, McMahan says one student wanted to carve 300 books into a bookshelf in the shape of a panther, Cartier’s signature symbol. It was unlike anything McMahan had ever done or been a part of.

But that didn’t stop them — it never had before.

Simpson has always loved the fashion industry, even creating her own clothes with a sewing machine she bought two years ago. But, until recently, it was merely a hobby.

That changed in Spring 2018, her final semester at UNC, when the senior communications major sent an email to McMahan asking about enrolling in “MEJO 651: Workroom FashionMash Product Design.” Despite never having taken a class in the Hussman School, she was drawn to the interaction and creativity of McMahan’s course, unlike any she had seen on campus.

“From the very first day, everyone knew that this was hands-on,” Simpson said. “You’re doing, you’re learning, every single day.”

For a non-media and journalism major, immersing herself in the public relations side of fashion has been both a welcomed challenge and a valuable learning experience. It has enabled her to bolster her creative gifts with the tools to market them — and share those experiences with other like-minded students.

Simpson says it’s been an eye-opening experience working with McMahan in the Hussman School environment. But nothing opened her eyes quite like the trip to Italy over spring break, when she and her classmates met with some of the fashion industry’s most influential figures in Milan and Florence.

McMahan loves incorporating the international marketplace into her course. There are no barriers for small brands to move across the globe, she says, and the big brands are all global. There’s also no better place to learn that than Italy, where new-world technology interacts with the symbolic birthplace of fashion.

"When you go to places like Milan and Florence,” McMahan said, “you're looking at the origins of an industry that we are participating with today."

The highlight for Simpson — besides the food, of course — was meeting someone from Ssheena, a Milan-based female clothing brand with a bold contemporary aesthetic. It was personal for Simpson, who someday hopes to start her own clothing line and maybe even her own company. And in Milan, arguably the fashion capital of the world, she tried on clothes from Ssheena’s fashion line and modeled for the company.

"It was just really nice to live that lifestyle and not just be in the classroom or reading about people or what they do,” Simpson said. “You get to hear it first-hand, and you get to see what they're creating.”

Simpson says her experience in FashionMash has been unlike any class she’s taken at UNC. Her only regret is that she didn’t discover it earlier.

"I really would love for this program to keep on growing,” Simpson said. "I know so many people here are just so ready and willing to create, and this is the perfect opportunity.”

McMahan says opening Workroom’s doors to majors and non-majors alike creates a highly engaged and collaborative community that keeps the program thriving and growing. She hopes one day there might even be a certificate in lifestyle branding for those who take the full gamut of courses in the Workroom program.

For now, it’s the crown jewel of McMahan’s expansive creative influence on the Hussman School and UNC as a whole. And her work to this point is far from the final product.

“There's not a lot of places where this would be as open-ended and as creative as it is without that tremendous support,” McMahan said. “And I think the Hussman School has been the perfect home for it.”