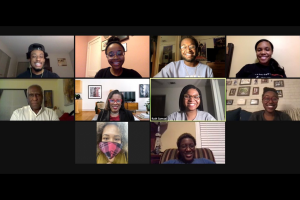 To commemorate the last week of Black History Month, the Carolina Association of Black Journalists (CABJ) invited NC Media & Journalism Hall of Fame inductee Professor Emeritus Harry Amana for an intimate conversation. On the evening of Thursday, Feb. 25, the retired professor sat down (virtually) with eight current UNC Hussman School of Journalism and Media students, and Hussman Director of Diversity, Equity and Inclusion and Associate Professor Dr. Trevy McDonald, to talk about his journey to becoming UNC’s first Black journalism professor and about laying the foundation for 30 years of CABJ.

Amana is a renowned reporter and lecturer. He began his writing career out of Philadelphia, working as a reporter and photographer for The Philadelphia Tribune. He went on to work for The Phiadelphia Inquirer, the Detroit Free Press, The Associated Press, and The Chapel Hill News.

“My interest was really not in mainstream journalism,” explained Amana. “I wasn‘t really a person that wanted to be objective. I wanted to preach, I wanted to influence.”

That was inevitable for him as a professor. Amana arrived at UNC in 1979 to teach courses such as Newswriting, Reporting, Feature Writing, The Black Press and U.S. History, and many more. As the first and at the time only Black professor, Amana was privy to a lot of information. He shared that whenever Black students wanted to do something within the University, they came to him; whether it was to start a magazine or a poetry publication.

His ability to mobilize had been cultivated from his own time spent as an English student at Temple University, where he helped the Black student body start The Black Student League. From there the organization started a newsletter, with Amana as editor. While reporting in Philadelphia after college, Amana connected with Chuck Stone and Pulitzer Prize-winner Acel Moore. Stone had the idea to start a professional organization for Black journalists; he had seen other industries start up similar programing and thought journalists deserved the same. So, the Philadelphia chapter of the Association of Black Journalists was formed, making it older than the National Association of Black Journalists (NABJ) chapter itself.

Having been so involved in its formation, bringing its teachings and connections to students in Chapel Hill felt like a natural move for Amana. “My big interest was getting students to the job fair, plain and simple,” he revealed. The goal was to get them access to spaces where they could “rub elbows with the professionals” who were in position to get them internships, and later jobs.

His kids, as Amana calls them, have gone on to become professors themselves (some right here at UNC), award-winning reporters, and so much more. During his talk, he spoke most fondly of the relationships he fostered with student while at UNC, listing their names and accomplishments like a proud parent. It’s a testament to what organizations like CABJ do for Black students at UNC, and beyond the cobbled streets of campus.

There are a lot of questions surrounding the future of journalism now — particularly print journalism. “I don‘t see a real future for a lot of newspapers, a lot of print,” sighed Amana. But even with that uncertainty, Amana seemed confident that the innovation and art of journalism would come to life through those eight students in that Zoom room.