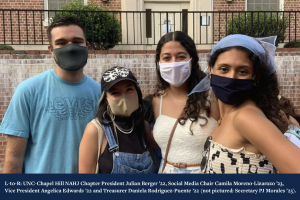 With the fall semester underway and class and work schedules consolidating, now might be the time for new UNC Hussman students to “find their people.” To that end, we’re profiling a series of student leaders and the interest groups they represent. Part 1 in our series:

One of the National Association of Hispanic Journalist’s newest student chapters was formed in 2020 at UNC Hussman by broadcast journalism student Julian Berger ’22 (above left) and visual communication student Angelica Edwards ’22 (above second from right), with faculty member Paul Cuadros advising the power duo.

Berger is on the broadcast journalism track and plans to cover the Latinx community in front of the camera after graduation. Born and raised in New York City until the age of six, when he and his family moved to Charlotte. This summer, Berger returned to NYC for an internship with NBC News Now and lived in the neighborhood where his mother grew up.

“We decided to create the chapter because we didn’t see much representation of Latino students at Hussman,” said Berger, who explained that he and Edwards wanted to provide a way for Latinx students to come together for media and journalism professional development opportunities, workshops and guest speakers.

In its inaugural year, the chapter conducted workshops on summer internships and career preparation, hosted numerous guest speakers including Sylvia Obén of Telemundo Charlotte and Nicole Acevedo of NBC News and provided opportunities to gather socially.

Last year, Edwards presided over the chapter and Berger served as vice president. This academic year, they’ve flipped roles. Joining them on the executive board are Secretary PJ Morales ’23, a Robertson Scholar who served as sports intern at The Charlotte Observer this summer; Treasurer Daniela Rodriguez-Puente ’22 (above right), multimedia team member for both 1893 Brand Studio and UNC Reese Innovation Lab whose “Sana, sana” doc for Carolina Latinx Center has reached over 19,000 viewers; and Social Media Chair Camila Moreno-Lizarazo ’23 (above second from left), co-editor-in-chief of The Bridge, an online platform for women of color.

Berger noted that “Once we created UNC NAHJ, it was interesting to see just how much Latino representation there is at our school.” He said that he went from feeling somewhat isolated in the broadcast concentration to meeting other Latinx students with career goals in the visual communication, advertising/public relations and print worlds.

“It was cool to see everyone come together and support each other, like a little family,” within the school’s community, Berger said.

Berger, Edwards and the team met last week to brainstorm about potential fall 2021 events. They’re hoping to match the enthusiasm generated in February, when their chapter and the Carolina Latinx Center hosted a close to 100-person strong Zoom audience for a conversation with Mexican-American journalist Maria Hinojosa, who shared her personal take on how journalism has changed over the years.

“If you are anywhere, local or nation, and you are not consistently reporting about Latinos and Latinas at every level of your society, you are not doing excellent journalism,” said Hinojosa to her campus-wide audience.

As chapter president, Berger encourages any interested Latinx students and Latinx allies at Carolina to get in touch via Google form.

“We’re open to anyone [at Carolina] with an interest in media and communications and journalism or the representation of Latinos in media in the U.S,” said Berger.