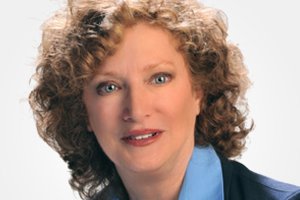 When Penelope ‘Penny’ Muse Abernathy was a high school senior in Laurinburg, N.C., her school newspaper made a projection: their editor would one day be at The New York Times.

It was an accurate forecast, if an incomplete one. Abernathy’s career has led her to executive positions at the Times, Harvard Business Review and The Wall Street Journal, and to Columbia University for a Knight-Bagehot Fellowship, an MBA and an M.S. in Journalism. She has published two books and received international attention for her groundbreaking research on the state of local journalism and the rise of news deserts across the country.

As Abernathy retires as the Knight Chair in Journalism and Digital Media Economics at the UNC Hussman School of Journalism and Media after 12 years, she says she is most proud of how her experience, knowledge and dogged truth-seeking have come together at Carolina in one serendipitous role – teacher.

“It is a wonderful notion that, as a college instructor, you get to plant the seed.”

Rising through the ranks

When Abernathy graduated from high school, her father told her she needed to do one of two things: go to school or go to work.

“I marched right into the Laurinburg Exchange and told the editor that I was ready to be a journalist,” she said. “He took a risk on a whippersnapper, and I fell in love from the very first week I was there, covering American Legion Baseball and everything else they threw at me.”

The next year, she enrolled at the University of North Carolina at Greensboro, majoring in history with a minor in English and working at newspapers over the summer. Through an intra-university exchange her senior year, she came to Carolina for journalism courses, taking classes with legendary journalism professors Max McCombs and Donald Shaw who developed the oft-cited theory on agenda-setting — that media coverage determines what issues are debated in a community.

After graduation, she took a job with The Fayetteville Times where, within the year, she was editor of the paper’s lifestyle section.

“I was attracted to lifestyle journalism because there was a lot of consumer reporting that let you tell an important story that helped people live better lives,” Abernathy said. “From Shaw and McCombs and their notion of agenda-setting, I had a profound appreciation for what local news means in terms of supporting and nurturing grassroots democracy and informing people so they can make wise decisions about quality of life issues.”

The paper won awards for its lifestyle coverage, and Abernathy moved on to bigger markets. A perceptive reporter and editor, she began to see the future of news through a new lens.

She received a Knight-Bagehot Fellowship to study journalism at Columbia University and stayed on for her MBA to learn more about finance, something that would be central to her later rise through the executive ranks at the Times, where she created the strategic planning department, then the Harvard Business Review and The Wall Street Journal, where she led the international division.

“It’s important for me to identify with the mission of the media company or the news organization that I’m working for,” she says. “I was really lucky between The New York Times, Harvard and The Wall Street Journal, to have positions that allowed me to follow a passion and have some impact on those news organizations, helping them become profitable.”

From a place of practice

Abernathy joined UNC Hussman as the Knight Chair in Journalism and Digital Media Economics and created her signature “Digital Media Economics” and “Leadership in a Time of Change” classes, allowing her to mentor notable students like Sarah Frier ’11, who recently received The Financial Times and McKinsey & Company 2020 Business Book of the Year Award for “No Filter: The Inside Story of Instagram.”

In “No Filter”’ Frier credits Abernathy, who was the first to tell her she’d one day write a book.

“Penny, with her executive experience and general savvy about human beings, understood that there was always a whole lot more to the story than looking at the financial figures and charting the trajectory of the business,” says Frier. “She taught me to think about the legacy that these people want to create as a digital company and the competitive pressures, the industry disruption, the biases that go into who gets heard in a boardroom and the way that power works.”

When Frier was looking for jobs upon graduation, Abernathy counseled her to choose a company that would invest in her talents and allow her to grow. This led Frier to Bloomberg News, where she reports on social media companies.

“I took her digital economics and leadership classes, and Penny, she's all in with you. It's not just in class. She becomes a mentor figure for each and every person who comes through, asking questions that really make you think," she said. “By the end, she knows enough about you and what your instincts are, and how you think, that she can make predictions about your career. She told me that I would write a book within five years. I missed that deadline, but I wanted to fulfill her prophecy. Her voice was always in the back of my head."

David Bockino ’15 (Ph.D.) worked closely with Abernathy as a Park Fellow at UNC Hussman. Now an associate professor of sport management at Elon University, he helped teach her digital economics class, taking notice of her teaching style, how she used her backgrounds in business and news to merge concepts in ways that engaged students.

“Her class was fascinating. She came from a place of practice to bring together what she knew about how the industry worked, and what was changing, within an academic course of study ,” he said.  “She was truly a mentor, and she helped me navigate how to have an academic career though I’d not had an academic background. She reads my work and comments on it, and she still supports me in so many ways.”

While at UNC Hussman, Abernathy has produced seminal research on community journalism and led to The Expanding News Desert Project, which has produced four reports that highlight the dramatic changes in local journalism and explore ways to combat the rise of news deserts. Her two books – “The Strategic Digital Media Entrepreneur” and “Saving Community Journalism” – are aimed at helping media organizations survive and thrive in the digital world. For this work, she was awarded the Columbia Journalism School’s 2019 Christopher J. Welles Memorial Prize, in recognition of her “impact on the journalism profession, and its role in raising the alarm and prompting an industry-wide call-to-action about the local news crisis.”

Since 2016, Abernathy’s research around news deserts has resulted in the creation of a database of more than 12,000 news organizations in the U.S., including newspapers, independent news sites, ethnic media and public broadcasting. Abernathy and her research have been featured in more than 1,000 news articles and broadcasts around the world and cited or quoted in more than 300 scholarly articles and more than a dozen major books.

“A free flow of information is critical to our democracy. The real challenges to journalism started shortly after I joined The New York Times,” says Abernathy. “How do you take what has been so instrumental in the 20th century, which was print and broadcast journalism, and allow a transformation and a transition to new and profitable digital news organizations in the 21st century? I'm very concerned about the communities that have been historically underrepresented by journalists – those that are economically struggling, the ones that lack access to high-speed internet, because that lack of access limits the ability of residents in those communities to function, not only in democracy, but in this society. And it leads to misinformation, disinformation, polarization and lack of trust in institutions. That increasingly is what I really want to focus on in the next chapter of my work.”

In her final weeks as Knight Chair, she has presented her research at a closed-door session for Washington, D.C. policymakers; is assisting the staff of two U.S. Senators in drafting proposed legislation to address the local news crisis; and has fielded phone calls from reporters at major publications where she once worked who are writing about the impact of the pandemic on the future of journalism.

“Penny has been an inspiring teacher to many students, particularly around media leadership,” said Susan King, dean of UNC Hussman. “Now she wants to retire from the classroom so that she can spend more time with her trailblazing research and its implications.”

“When I came to the school, I had accomplished all I set out to accomplish, and much more, in the industry,” says Abernathy. “This gave me a wonderful opportunity to do research that would be shared widely and teach in an area where I could involve both current and future entrepreneurs, bringing them into my research and outreach projects. If I didn’t have all that working together, I think I’d be half empty.”