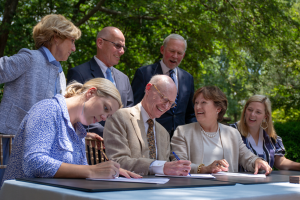 An addendum was added to this story in July 2021.

Printed on the second page of each of the 10 daily newspapers that Carolina alumnus Walter Hussman Jr. and his family own are the core values that his publications adhere to: objectivity, impartiality, integrity and truth-seeking.

Those values are being embraced enthusiastically at Carolina and will serve as a driving statement behind the newly named University of North Carolina at Chapel Hill’s Hussman School of Journalism and Media. With a $25 million gift to the school, the Hussman family is investing heavily in the future of journalism and the media professions and reinforcing those values for the next generation of media leaders being trained at Carolina.

At a time when public polls show trust in journalism slipping, the Hussmans are doubling down on their commitment to restoring that bond and trust between media and the public.

“I believe that by adopting these core values, the University of North Carolina at Chapel Hill's journalism school can be the leader and serve as an example for other journalism schools in America to follow,” said Hussman, the chairman of WEHCO Media Inc., which owns newspapers, magazines and cable television systems in six states. “This is a key reason why we enthusiastically support the school and the University. This is a first, but important step, in renewing the public's trust in our profession and the news media.”

Hussman‘s core values will be chiseled in granite at the entryway of Carroll Hall for students to see daily.

“This naming gift provides $25 million in endowed funds to build for the future and invest in the people who have made this school a national leader — our professors, our staff, our students and all of the promise they represent,” said Susan King, dean of the Hussman School. “The Hussman family’s passion for journalism is based on unwavering values. Their generosity and vision extend transformational support across all of the media disciplines that we teach and research and serve. Core values are at the root of all we do.”

With this, the largest single gift ever made to the school, the Hussman School will become the fifth named school at Carolina, joining Kenan-Flagler Business School, Gillings School of Global Public Health, Eshelman School of Pharmacy and Adams School of Dentistry.

“From Edward Kidder Graham’s first journalism course at Carolina to today, UNC’s School of Media and Journalism has prepared thousands of students to discover the truth, foster democracy through dynamic communications and ignite the public conversation across our state and around the world,” said Interim Chancellor Kevin M. Guskiewicz. “We are grateful that one of those students, Walter Hussman, is investing to make this school the leading force for good journalism in our state. His core values reflect the priorities and principles of the entire community here at Carolina, and it is a privilege to name our school in honor of his visionary leadership in media.”

Carolina first launched the University’s highly regarded journalism program as a department in the College of Arts & Sciences in 1924, 15 years after Edward Kidder Graham taught the first journalism course at the University. It was designated a professional school in 1950, and today it proudly boasts numerous NC Media and Journalism Hall of Famers as alumni, including legendary journalist Charles Kuralt, advertising visionary Susan Credle, media innovator Jason Kilar and ESPN icon Stuart Scott.

Hussman, who was an NC Media and Journalism Hall of Fame honoree in 2014, will now help the school reach the next level. With this gift, the University will be able to better prepare thousands of students for careers in journalism, public relations, advertising and the content-rich field of communications that is rapidly evolving.

“It would be difficult to overstate the impact of this gift during this pivotal time of economic dislocation and mounting distrust amid campaigns to discredit reporting, journalism and media institutions,” King said. “The Hussman family’s stalwart belief in the future of journalism, its critical role in a democratic society — and our school as a guardian of its foundational values — is both a signal and calling to remain grounded in principles as we innovate, invent and lead the way through the challenges of this era.”

“This is an amazing gift and an amazing honor and privilege that Mr. Hussman has selected us to bear his name as we shepherd the next generations that will shape the future of the media industries we serve,” said Francesca R. Dillman Carpentier, the academic dean and W. Horace Carter Distinguished Professor at the Hussman School. “We are excited at the incredible opportunity this gift provides for us to emulate and advance the qualities Mr. Hussman’s own communications company represents with its diverse array of news, magazine, cable, broadband and digital marketing services — and that is to stand for high quality, hard-hitting, trustworthy, creative, impactful and technologically forward media that serves the public and connects community to each other and to the greater society.”

The Hussman family previously established two endowed professorships at Carolina — in the journalism school and the School of Education.

Walter Hussman Jr. has spent his entire life in the news business. For him, it’s more than an industry. It’s the family business. The future of journalism and media is personal.

His grandfather, Clyde Palmer, bought the family's first newspaper in 1909, and over the next 48 years acquired and published five daily newspapers — mostly in Arkansas. Clyde’s daughter, Betty Palmer, met Walter Hussman Sr. at the journalism school at the University of Missouri, and they married in 1931. Walter Hussman Sr. published the family newspapers for 50 years, until 1981, and also expanded into radio and television broadcasting stations and cable television systems.

Hussman Jr. began working at the Camden News when he was 10 years old in 1957. He continued working at his family’s newspapers in the summers throughout high school. He majored in journalism and graduated from Carolina in 1968, then earned an MBA at Columbia University in 1970.

WEHCO Media now owns dozens of media outlets in six states. Hussman is an active media leader and innovator. He has served as president of the Southern Newspaper Publishers Association and on the boards of the Associated Press and C-SPAN. He was Editor and Publisher Magazine’s Publisher the Year in 2008, named a distinguished alumnus of UNC-Chapel Hill in 2009 and named Arkansan of the Year in 2019 by Easterseals Arkansas. He has also been active in K-12 education and prison ministry in his home state of Arkansas.

In recent years, Hussman's children Palmer Hussman, Carolina alumnae Olivia Ramsey and Eliza Gaines — a 2012 master’s graduate from the journalism school — have played active roles at WECHO. The gift to Carolina, Hussman said, honors the four generations of his family who have dedicated their lives to news and journalism.

“We're really happy that we can do this to support Carolina and to support journalism,” said Ben Hussman, Hussman’s wife.

Investing in journalism and media education

When Walter Hussman Jr. graduated from Carolina's School of Journalism in 1968, the news industry was on the rise. Carolina alumni such as Charles Kuralt and David Brinkley, were already trusted news sources and would inspire a new generation of journalists who themselves promoted the fundamental values they learned at Carolina.

Through objective and impartial reporting during some of the nation's most pressing issues, journalists had become a trusted source for information.

“You could trust a journalist to tell you the facts and let you make up your own mind,” said Hussman.

But that trust, Hussman said, has been eroding as some in the media industry have moved away from its founding principles.

“We're seeing people questioning who they can trust,” Hussman said. “Americans are beginning to realize they can't trust a lot of what they see on the internet. They need to rely on a trusted source of professional journalism. We need to renew the values, standards and practices that have stood the test of time.”

Hussman may have learned a lot from his family, but he honed his skills and solidified his values at Carolina, he said.

Hussman said he hopes his investment to train the next generation will help reverse the decline in the public trust of the media. He wants the core values printed on the second page of his newspapers to become ingrained in all journalists.

King also believes the Hussman School can do all that, and more.

“This is a transformative gift for the school, not just for now, but for the future — for not one generation, but for generations to come,” she said. “I find it a wonderful moment when we as a school can embrace the enduring values that Walter Hussman Jr. learned here years ago. We believe in those values, and they will better prepare generations of students for influential careers in the evolving fields of journalism and media.”

Printed in every issue of Hussman’s daily newspapers are the following core values:

To provide the most complete report, a news organization must not just cover the news, but uncover it. It must follow the story wherever it leads, regardless of any preconceived ideas on what might be most newsworthy.

The pursuit of truth is a noble goal of journalism. But the truth is not always apparent or known immediately. Journalists’ role is therefore not to determine what they believe at that time to be the truth and reveal only that to their readers, but rather to report as completely and impartially as possible all verifiable facts so that readers can, based on their own knowledge and experience, determine what they believe to be the truth.

When a newspaper delivers both news and opinions, the impartiality and credibility of the news organization can be questioned. To minimize this as much as possible there needs to be a sharp and clear distinction between news and opinion, both to those providing and consuming the news.

Since the announcement of the Hussman gift, there has been a need for clarifications of our school’s relationship to the “Core Values” that are published each day in the 10 daily newspapers owned by Walter Hussman Jr., our alumnus. They represent the values that Hussman learned as a student here in the 1960s when our school’s focus was newspaper journalism.

While we share with Hussman a deep desire to restore America’s trust in journalism, and to prepare our journalism graduates to serve the public and understand the difference between reporting and opinion, I want to make clear that his statement of values is short of the mark in encompassing the school’s values. They are too narrow to reflect the full mission of the school, the breadth of the teaching, research and creative activity that have built our reputation and notably lack the words “democracy” and “diversity,” which are two of the key values that permeate our teaching today.

We are a much different institution than in the 1960s. Our journalism students work on all platforms and produce documentaries that tell points of view; we emphasize reporting built on evidence and facts, not “both side-ism.” The majority of our students are public relations and advertising majors today, learning persuasion and advocacy. All share a commitment to ethical communication that serve the public good. Our faculty is diverse in discipline and talent, made up of scholars, practitioners, fixed-term and tenured professors.

Walter Hussman’s Core Values express a corporation’s admirable commitment to the community. Recently, especially during the Nikole Hannah-Jones hiring saga, they have been confused as values that will determine our school’s hiring and that reflect what we believe as a school. We are not a corporation, and we are not governed by those values; we are an independent university school governed by values of academic freedom. Only the faculty of the school can define what we teach, who we hire and what we believe.

We make this distinction in the summer of 2021 to clarify our relationship with Walter Hussman Jr., our alumnus and our benefactor.