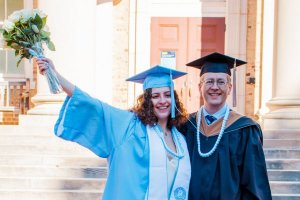 Don't miss this UNC-Chapel Hill story about UNC Hussman School of Journalism and Media's own Julia Johnson '20, and her fellow Carolina-grad dad! Julia and her father, Dean Johnson, are both celebrating graduations from the University this Fall. Julia received her undergraduate degree in media and journalism, while her father earned an MBA from UNC Kenan-Flagler Business School. Read their story via University Communications, or below.

Julia Johnson and her father, Dean, are both celebrating earning degrees from Carolina this fall. While Julia wrapped up her undergraduate studies this fall, Dean received his MBA.

When Julia Johnson toured Carolina as a high school student, she knew Chapel Hill was where she belonged. And even though she began her college career at another university, her path ultimately led her to join the Tar Heel community her junior year.

“I just loved the campus and the feel of the school,” she said. “I just knew that it’d be a great school. I wanted to come to a place that would give me a lot of opportunities as far as majors and careers. I also wanted to come to a school that had a lot of school spirit.”

That high school vision of what it would be like to be a Tar Heel concluded with her donning a Carolina blue graduation robe — an honor she earned this semester as she officially graduated from the University with a degree in media and journalism from the Hussman School of Journalism and Media and a minor in computer science in the College of Arts and Sciences.

She won’t be wearing the gown to walk into the Smith Center for Winter Commencement after the ceremony was postponed due to COVID-19 safety concerns, but Julia did have another special reason to put on her cap and gown last week: graduation photos with her dad, Dean, another Carolina graduate this semester.

“It’s been cool to celebrate, especially since we don’t have an in-person graduation,” she said. “It’s nice that we can celebrate together.”

After two years of night classes in UNC Kenan-Flagler Business School’s Executive MBA program, Dean earned his MBA this fall as his daughter took her final undergraduate courses. Celebrating the achievement alongside his daughter has become a unique graduation gift.

“The whole family is really proud of Julia and her work,” he said. “The fact that we get to graduate at the same time is pretty cool.”

After transferring from Southern Virginia University, Julia started studying at Carolina two months before Dean began his MBA program. And while Julia had always dreamed about her time at UNC-Chapel Hill, Dean’s arrival at Carolina happened a bit more suddenly. After spending his career as a computer networking professional — mostly at Cisco — he was looking for a shift in his career and saw an MBA from Kenan-Flagler as the tool to open new leadership doors.

“I hadn’t really planned on a graduate degree for most of my career,” he said. “Over time, I had more and more experiences in leadership. Slowly, I got more and more interested in leadership in business and just decided that I really wanted to make that my primary focus. An MBA was a good way for me to do that.”

The father and daughter from Apex, North Carolina, shared the campus for about two years, catching up after Dean’s evening courses when they could. They even attended football and basketball games together — in the student section, of course.

The two celebrated their graduations and change to alumni status with family over Thanksgiving. They also took one more trip to campus for graduation photos together — Dean in his black graduation regalia and Julia in the Carolina blue robe she envisioned herself in as a high schooler.

“I’m really proud of myself. I don’t think I just did it. I think I thrived at Carolina,” said Julia, who will soon begin a position in technical learning development at SAS. “I always dreamed of putting on the blue gown. It was really nice to be able to do that. I feel very accomplished. It took a lot of hard work.”