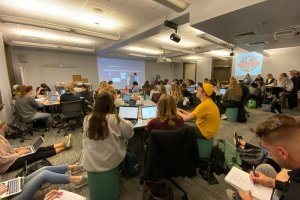 Creating a campaign in two weeks, implementing a full plan from concept to strategy to creative, with a full slate of social media including multiple videos — on zero budget? That would be a tall order for even a professional communications firm. But one class at UNC Hussman overcame that challenge masterfully this semester.

Faculty member Gary Kayye split his class — MEJO 477 "New Media Technologies: Their Impact on the Future of Advertising, Marketing, and Public Relations" — into two groups. One had to create a campaign to bring back the painted Tar Heel feet that appeared on the roads in Chapel Hill in the 1980s. The other team had to pitch the community on a physical replacement for the Silent Sam monument. Each had two weeks to come up with a detailed strategy for a public relations campaign. They then designed creative elements to get engagement around campus. Finally the groups launched with videos that told their stories. The campaign with the most online engagement won.

“This project is designed to be 100% real-world,” Kayye said. “As much as you’d like to plan, plan and plan some more, the truth-of-the-matter is that a lot of the time you use a 'Ready, Fire, Aim strategy’ and use data to pivot your plan as you move along in a campaign. It’s illogical to some but creativity usually isn’t that good when you over-plan and over-execute it. I challenge my students to always think creatively, first, and logically, second.”

We spoke with the elected student leaders of both campaigns to hear about that process.

STRATEGY
J.P. Rickabaugh ’20 led the Envision Carolina team. They chose to work on the Silent Sam replacement campaign, and Rickabaugh said his group was excited to tackle the emotionally fraught project head on. Together, the students decided that “our campaign should push the university to use its painful history for the greater good,” Rickabaugh said. Like many PR professionals, their goal was to change the conversation in their community.

The students all started with varying ideas on how to tackle the project. But Rickabaugh witnessed something remarkable during the pitch process. Three of the five groups came up with the same pitch independently: to build an arch at McCorkle Place. Their concepts varied, but all were craving a new way of welcoming visitors to campus. The final product envisioned an art installation of three arches, depicting campus history and ending with the present day. The team drew guidance not just from Kayye, but Hussman faculty member Livis Freeman ’99, who spoke with the class about his experiences as a student and faculty member. Freeman’s visit, Rickabaugh said, made the students realize that their campaign strategy had to involve each student’s experience. They put together creative asking how students envision Carolina.

The Home is Where the Heels Are group knew how they wanted to tell their story from the beginning, leader Abbie Ashford ’21 said. Though the original painted Tar Heel project was connected to athletics, the class decided immediately that they had to engage the entire community. Ashford had the subgroups within her class pitch to the room — a process she says was intimidating but educational. The winning pitch outlined a campaign that would portray the footprints as steps leading ‘home’ to a campus that is welcoming to all in both the Chapel Hill and Carolina communities.

Ashford’s team developed a playbook that detailed everything from fonts in graphics to draft headlines for social media. They planned social media pushes that would highlight varied aspects of Carolina life, including the arts, academics, sports, diversity, the public university network, the community ties to Chapel Hill and the campus’ beauty. The social media-savvy group also planned a ‘teaser’ project — chalking Tar Heels around campus to give Carolina students good spots for Instagram photos.

Home is Where the Heels Are launched with a video showing all the shoes worn by the Carolina community. The team followed up with social media and more videos. Ashford said she truly saw the impact of the campaign when she started asking students to sign the group’s petition — and many told her they had already heard of the campaign. News even reached the town of Chapel Hill and the UNC Residence Hall Association, both of whom expressed interest in adapting the project.

Envision Carolina’s creative faced an early hiccup when they realized their original video plan — students walking on campus — was too close to the video the other team had already produced. So the group pivoted quickly, experimenting with camera shots around campus and even borrowing a drone from a classmate. The end result mixes closeups of Carolina students with a journey through campus. The team started the campaign tentatively, eager to avoid the controversy that comes with a Silent Sam discussion. But Rickabaugh learned that engagement depended on wading into the debate, as more and more students approached the group to ask how they could help the project.

IMPACT
The numbers show the two campaigns had a remarkable impact, reaching over 16,000 Carolina students and ending with over 1.6 million online impressions. Envision Carolina won, slightly edging out Home is Where the Heels Are — but both students said they learned valuable lessons.

“I was never the type in the past to lead these projects in an academic setting,” Rickabaugh said. “But it made me realize that I now naturally want to step up and make a positive impact.” It taught the students, he says, “a lot about how to work with people; how to have flexibility working with a team.”

Ashford, who started as a pre-med major and switched to media and journalism after her first class at Hussman, said the experience is why she loves this school so much. “It solidified the fact that I want to go into advertising,” she said. “I got to see the amazing talent that comes from people in that class. I would do it over again any day of the week.” And, she said, it gave her some faculty appreciation too: “I learned that it is very hard to oversee a big group of people — I gained a lot of respect for professors!”