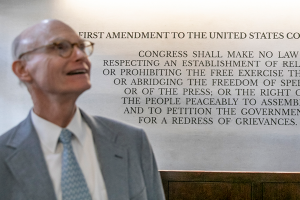 In September, Carolina announced a historic moment for the school — a Campaign for Carolina gift of $25 million from alumnus and Arkansas native Walter E. Hussman Jr. ’68, his wife Ben, their son Palmer Hussman, and daughters Eliza Hussman Gaines ’12 (M.A.) and Olivia Hussman Ramsey. The gift is the largest single gift ever made to the school and the largest donation in the history of the Hussman family.

Walter Hussman’s Iowa-born grandfather, Clyde Palmer, began his career at age 18 as a newspaper stenographer (1894). Palmer and his wife Bettie settled down in Texarkana, Arkansas and in 1909, Palmer purchased a local newspaper, the Texarkana Courier, for $900.

"Our company has been in newspaper publishing for 110 years, since 1909, the same year they started teaching journalism at the University of North Carolina,” Hussman Jr. said.

By the 1930s, Palmer was investing in radio; and by the early 1950s, in a television station in southwestern Arkansas and northeastern Texas.

Palmer newspapers employed the first automatic teletypesetter circuits to connect a group of newspapers (1942) and pioneered spot color printing in news photography, like featuring a red flashlight in a black-and-white photo of the scene of a murder in the Texarkana Daily News (1946).

The Palmers’ daughter Betty, born in 1911, met Walter Hussman Sr. when they were both journalism students at the University of Missouri. Betty and Walter’s third child and only son, Walter E. Hussman Jr., was born in 1947 in Texarkana and grew up in Camden, Arkanasas. When Clyde Palmer died in 1957, Hussman Sr. became president and publisher of the Palmer newspapers and went on to oversee the family’s investment in radio, television, and cable television, seeing the technology as a potential new means of delivering newspapers.

Walter Hussman Jr. was 10 years old when he began working in the family business after school. Three years later, he first set foot on Carolina’s campus to visit his sister Marilyn Hussman [Augur], who graduated with a degree in mathematics from UNC in 1960. Hussman Jr. went on to study at Philips Exeter Academy in New Hampshire and graduated from The Lawrenceville School in New Jersey before he enrolled as an undergraduate at Carolina, as encouraged by high school history teacher and lifelong mentor Walker Blanton, a 1960 Carolina graduate.

As social chair at DKE, Hussman Jr. was enjoying Carolina a bit too much when, as he tells it, Professor Walter Spearman “put a burr under my saddle” to think more seriously about what he wanted to do with his life. “It was a really great conversation,” Hussman remembered in an interview with the Pryor Center at the University of Arkansas, “and it was more important than I realized at the time.” A focused Hussman graduated in 1968 with his journalism degree.

Hussman received an MBA from Columbia University and worked as a reporter for Forbes magazine from New York City before returning in 1970 to help run the family business from Camden, Arkansas.

In March 1974, Hussman and his father purchased the smaller, struggling Arkansas Democrat, Little Rock's afternoon daily newspaper. Hussman moved to Little Rock, where he became the paper's publisher at 27. This set in motion a rivalry with the morning Arkansas Gazette (est. 1819) that some would call "The Great Newspaper War."

In 1981, Hussman became president of WEHCO Media, and then CEO. The paper wars over subscribers and advertisers ended 17 years later when the Gannett Corporation closed the Arkansas Gazette. WEHCO bought the paper’s assets, and the first Arkansas Democrat-Gazette was published the next day, Oct. 19, 1991. WEHCO purchased papers in Chattanooga in the late 1990s and combined them to become the Chattanooga Times Free Press. In 2008, WEHCO Media purchased two Missouri daily papers and one weekly. The company also moved into cable broadband, IP-enabled voice and digital services. Hussman’s nephew Nat Lea was named CEO in 2016 after fourteen years with the firm.

The Hussmans’ twin daughters graduated from Carolina in education and English; and Eliza returned to Carolina to prepare the paper for a digital future, graduating with her master’s degree from the school in 2012. The three children — two of whom work at WEHCO Media with their father — and eight grandchildren all live in Little Rock.

On October 25, Hussman students, alums, faculty and staff held a Naming Ceremony, celebrating with generations of Hussman family and friends — including recognition of the Hussman family at halftime of Carolina’s victory over Duke at the homecoming football game the next day.

“The school has come a long way in the 50 years since I graduated with a journalism degree,” Hussman said that weekend. “But what has not changed are those bedrock values, principals and standards of journalism that I learned half a century ago.”