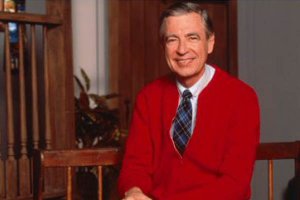 UNC Hussman assistant professor Joe Cabosky  — whose work focuses on the intersection of diversity, data and measurement and implementing disruptive creative strategy in public relations and advertising — wrote for the Public Relations Society of America:

One of this season’s biggest movie releases is “A Beautiful Day in the Neighborhood,” starring Tom Hanks as Fred Rogers, the man who created and hosted the long-running and beloved children’s television program “Mister Rogers’ Neighborhood” on PBS. The film arrives a year after a documentary about Rogers, “Won’t You Be My Neighbor?” which became the top-grossing doc of 2018.

Episodes of “Mr. Rogers’ Neighborhood” were produced from 1968 until 2001, and Fred Rogers died in 2003. Decades after much of his work, interest in the children’s-television host remains salient in America’s public psyche.

Mr. Rogers was best known for his educational TV for the nation’s youth, but his groundbreaking work also has much to teach us about public relations.

1. The role of the audience

People continue to debate what public relations means, and which of its tools to use. When faced with a problem to solve, should we try the staples of media relations? Community relations?

If we throw in social media, perhaps that will do the trick. The truth is that public relations is whatever we need to meet our objectives for an audience.

Over his decades-long career, the public that Mr. Rogers cared most about was America’s children. If a PR professional or student were asked what tactics first enter their minds to “practice public relations,” then maybe they would cite those aforementioned classic tools.

But if asked, “How would you practice public relations if your target audience was America’s children?” they might find a press release or Twitter message a bit absurd.

Therein lies the first major PR lesson from Fred Rogers’ work: The right method to use depends entirely on our audience. It may seem obvious — and as PR professionals we claim not to use one-size-fits-all approaches — but we don’t always practice what we preach. Instead, we often choose tactics first and then ask how they can be applied to an audience.

As Mr. Rogers’ example reminds us, we should always think about our audience first, and then decide what tactics or strategies will best suit that audience.

2. The importance of innovation

Once the audience is established, we have to identify our objectives. Mr. Rogers sought to improve the world by making children feel loved and accepted, and by teaching them about society and their neighbors. He wanted to convey a sense of decency, humanity and love.

While there’s no indication that Mr. Rogers viewed himself as a PR practitioner, he was arguably one of the most successful communicators of his time.

To pursue his objectives, he could have thought in conventional terms. And far too often, frankly, that’s what we do in public relations. We have a list of tactics, rules or professional norms, and then we try to cram everything we do into those lanes. Mr. Rogers was innovative in using children’s television to deliver his messages.

But he also broke rules in how he utilized his method. Mr. Rogers was often told that children would not respond to messages about mature, difficult issues such as racism or divorce.

And yet he became a beloved icon because he defied the rules, trusted his audience and used the radical tool of educational television for children — with even more radical content within his chosen tool — to bring about cultural changes.

So, can children’s entertainment be considered a form of public relations? Why can’t it be?

After all, if I asked you to bring about an improved sense of humanity and decency in youth, would you use a press release? Or something disruptively different? Viewed through such a lens, public relations becomes an exciting world of opportunity and possibility.

For those of us in public relations, this all leads to the fundamental truth of what we do: We build relationships. Mr. Rogers’ work demonstrated how strong those bonds can be.

He also showed that success is seldom achieved through short-term focus. He reached out to children day by day, week by week, year after year.

His impact accumulated over time, evident in the people who still remember him all these years later, in the groundbreaking box office of the documentary about his life and the high expectations for this year’s film about him.

Following his example, we should remember that most of our organizational and client goals don’t involve the short-term gains of advertising or marketing. Instead, we’re in the people and relationship business — everything we do and create builds and maintains those relationships. And the greatest successes require time and an accumulation of those raindrops to cultivate these relationships, thus building to these lasting impacts.

4. The necessity of measurement

How can we measure the success of these creative endeavors about Mr. Rogers? We might count impressions of the new film trailer (over 11 million, at the time of this writing), the number of news articles that covered Mr. Rogers in his day, or the total number of people who watched his program over the years.

But such measurements would not reveal the whole story. More meaningful measures would instead gauge impact and engagement, and the difference that Mr. Rogers made in the lives of children.

Such measurements would be more nuanced regarding how his viewers grew up to become adults, and how his lessons from their childhood changed their world views. They would measure how those former kids may have eventually become parents themselves and passed along the legacy of his work.

Just as we need to think about tactics and strategies in new and creative ways, we should do the same with how we measure our work. Imagine, then, the possibilities of what public relations is and can be.

It will be a beautiful day in the neighborhood, indeed.