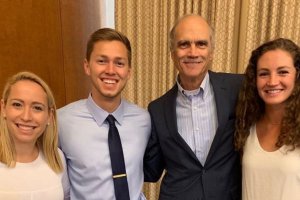 Recipients for the award are nominated and selected by members of UNC’s undergraduate population.

UNC Hussman teachers comprised two of the 15 across the University who were honored with the award this year. UNC Hussman Associate Professor Spencer Barnes also received the honor.

“It’s the most meaningful award I could get. I’m humbled,” Robinson said. “Students are the people I do this for. Carroll Hall is filled with teachers who work so hard to make each student's experience valuable.”

Robinson, who began teaching at UNC Hussman in 2012, has taught various courses in the school including media history and reporting. Currently, he teaches MEJO 356: Feature Writing and MEJO 625H: Media Hub.

Student Undergraduate Teaching Award recipients are selected based on demonstrated and consistent excellence in undergraduate teaching, creation of a dynamic intellectual environment, respect for intellectual diversity and success in positively affecting a broad spectrum of students both in and outside the classroom.

Robinson entered the classroom after 37 years in the newspaper business, 27 of which were with the News & Record in Greensboro, N.C., where he served as editor from 1999–2011.

“I’m a journalist and editor, which prepared me to be a teacher. I know both the joy and the rigor of journalism, and I try to bring that into the classroom,” Robinson said.

Students reflected on that legacy on Twitter with praise for Robinson after the award was announced.

Robinson remains humble about the accolades.

“My teaching philosophy is that I’m not a success until my students are a success, and I believe that doesn’t end when the class is over,” Robinson said. “I give students a lifetime guarantee of my help. As a result, I’m honored when students from years gone by come back and talk about their hopes and dreams, their resumes and job prospects.”

For Robinson, being a part of the Hussman family has been the true career highlight.

“The leadership of UNC Hussman is clear that students rank at the top of the academic hierarchy. And every faculty member has helped me whenever I’ve asked,” he said. “The national championship banners that hang from the rafters in Carroll Hall inspire all of us to be the best.”

Learn more about Robinson and his work.