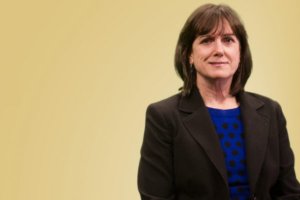 A self-described Army brat, Anne Johnston learned a lot of things moving around during her childhood.

Asking questions was another — a personality trait that formed the foundation of a career that has examined not only why we ask questions but why we ask the ones we do.

Johnston, the Howard and Hallie McLean Parker Distinguished Professor at the UNC Hussman School of Journalism and Media, retires this semester, leaving Carroll Hall with a legacy of decorated research focused on the media’s coverage of sex trafficking and the representation of gender-based violence in the media.

Gender-based violence is violence directed at someone based on biological sex or gender identity.

“Working at UNC Hussman has meant that I've had the opportunity to have as my colleagues the top researchers and creative thinkers in the field. My colleagues have been incredibly supportive of the work I do,” Johnston said.

Some of that work includes what Johnston calls her proudest accomplishment, The Irina Project, which she co-founded in 2009 with UNC Hussman Associate Professor Barbara Friedman.

For Johnston, wanting to understand how women were covered in the media goes back to her undergraduate days at the University of Central Florida, where she earned a bachelor’s degree in communications. It was the late 1970s and was a time when social roles were being questioned, including those of women.

“We have certain ways in our culture of how we tell stories of gender-based violence,” she said. “When you’re telling a story, you always want to be able to ask what biases you’re bringing to a story.”

She landed her first job right here at UNC, working as an assistant professor in the Department of Radio, Television and Motion Pictures from 1986 to 1993, before coming to UNC Hussman where she has been ever since, serving from 2007 to 2012 as the associate dean for graduate studies and then from 2015 to 2017 as UNC Hussman’s academic dean.

Johnston’s research has appeared in journals such as Feminist Media Studies, Political Communication, Journal of Communication, Women’s Studies and Journal of Human Trafficking. Johnston and her collaborator, Barbara Friedman, were selected as the first team into the Thorp Faculty Engaged Scholar program at UNC in 2014 for their work on The Irina Project.

In addition, The Irina Project was a partner on a multi-million dollar grant from the Governor’s Crime Commission, part of the North Carolina Department of Public Safety, to work with Project No Rest to develop an awareness and education campaign about human trafficking and to connect victims of trafficking to services.

“It goes without saying that Anne is a great scholar, but in addition, she has a keen sense of fairness and an ability to always see the big picture,” said Friedman, who, depending on the day, can or can’t deal with the fact that Johnston is retiring. “Those qualities, combined with her quick wit, have made her an excellent mentor, research partner and friend.”

Johnston has also relished her role as a mentor and a teacher, calling her work with students as critical for her research and vice versa.

“I've been able to teach and interact with the best undergraduates and graduate students, and I hope I've been able to work with them and prepare them to think deeply about what they produce, write, research and about how that impacts individuals and society,” Johnston said.

Over her years at UNC Hussman, Johnston has taught courses reflecting her research interests, from graduate seminars in the portrayal and framing of gender to undergraduate courses on gender, race and violence in the media.

Meghan Sobel Cohen, now an associate professor in the Department of Communication at Regis University, cites Johnston and her research on media representation of sex trafficking as why she came to UNC for her Ph.D. Cohen was a Roy H. Park Fellow who graduated from UNC Hussman in 2015.

“From early on in my time at UNC, Anne gave me the opportunity to work with her on an array of projects, ranging from research projects and publications to a McCormick Foundation-funded workshop that brought journalists from around the country to UNC to learn about accurate reporting of sex trafficking,” Cohen said. “Even after I graduated, Anne has continued to be an invaluable mentor and advocate. I'm grateful to Anne for her wisdom, intelligence and kindness.”

UNC Hussman Associate Professor Trevy McDonald’s work with Johnston has spanned decades, first as a student and later as a colleague. McDonald served as Johnston’s teaching assistant while a master’s student in the Department of Radio, Television and Motion Pictures in the early 1990s, eventually becoming Johnston’s Ph.D. student and for the past 12 years has been Johnston’s professional colleague at UNC Hussman.

“I think Anne's legacy at UNC is multidimensional, but one thing that stands out to me is her passion for and support of diversity, inclusion and equity,” McDonald said. “She recognizes and values the importance of everything we do in the school with regards to research . . . and has an appreciation for scholarship targeted to underrepresented groups and communities of color.”

Johnston retires from UNC Hussman with this passion undiluted. She remains excited about journalism’s future, especially trends she has seen indicating a movement toward innovative and direct community engagement in both reporting and research.

“I’m very excited about the role of researchers and practitioners in bringing social issues and instances of social injustice to the public . . .  the continuing involvement in all things having to do with being engaged with communities,” Johnston said.

“Anne Johnston is the consummate scholar, and she has served our students, our school, the academy and public through research and engagement around important, difficult issues,” said Dean Susan King. “She leaves a legacy of service and legions of former students that will carry her commitment and service ethic forward.”

As for what she will do in retirement, she plans to travel (though due to COVID-19, she can’t do that quite yet) and spend more time with family.

Johnston will continue to play a key role in The Irina Project, co-authoring selected research and assisting with grant projects.