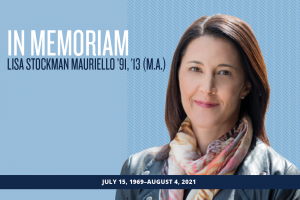 Lisa was born on July 15, 1969, in Pontiac, Mich., to Dennis and Maryann Stockman. She spent her early years in Danbury, Conn. She graduated from Apex High in North Carolina in 1987 and the University of North Carolina in 1991 where she met her future husband, Bob Mauriello of Staten Island.

Although not college sweethearts, once they started dating it didn’t take long to realize they wanted to spend the rest of their lives together. They were engaged in their beloved Chapel Hill before heading to Evanston, Ill., for Bob to attend business school at Northwestern. They were married on Oct. 7, 1995, while living in Chicago. In 1998, they moved to Charlotte, N.C., to be closer to family. Soon after, their family grew with the addition of Scott and Luke three years later.

In 2004, they relocated to Summit. Two years later, Dean completed their family. Summit has been their home for the last 17+ years. Lisa could not imagine a more supportive place to raise her three sons — while also becoming one of CNN’s 50 Most Powerful People in Healthcare.

Lisa started her healthcare communications career as an intern at Ruder Finn in NYC. In 1992, she joined Burson-Marsteller. She became the first employee at Chandler Chicco Agency (CCA) in 1995.

Lisa has been recognized as a role model for working women because of her extraordinary work/life balance. She was a pioneer in remote work, in Chicago and then Charlotte. After Scott’s birth, she was also at the forefront of job sharing.

Today CCA is part of Syneos Health. Lisa’s leadership responsibilities spanned PR, medical communications and branding services. During her career, Lisa was named as a Healthcare Businesswomen’s Association “Rising Star” and “Luminary” and inductee to both the PRWeek’s and MM+M's Halls of Femme.

In 2013, Lisa returned to UNC to earn an M.A. in Technology and Communication. Soon thereafter, she became an adjunct professor at NYU and UNC. Most recently, Lisa worked with UNC to create a health communication certificate program to educate the next generation of health communication professionals, called “Legacy for Lisa.”

Lisa was preceded in death by her mother, Maryann Stockman. She is survived her husband, Bob Mauriello, her sons, Scott (22), Luke (19) and Dean (15), her sister Julie Stockman, her father Dennis Stockman, her beloved dogs, Whisper and Koda, and countless others whose lives she touched. We will forever remember her love of UNC, travel (especially to Cancun and Ocean Isle Beach, N.C.), sangria, games of Phase 10 with her boys, her “Snoopy” laugh, and the way she made everyone she knew feel like their life was richer for having known her.

In lieu of flowers, donations can be made to Legacy for Lisa at UNC.