Making a dream a reality 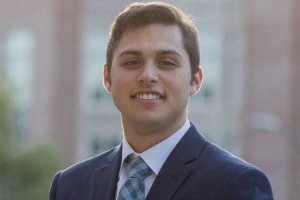 Graduating senior Nick Perlin will fulfill one of his childhood dreams when he graduates from UNC-Chapel Hill this weekend. But the journey to Winter Commencement wasn’t an easy one for the future journalist.

Nick Perlin still has his Carolina acceptance letter hanging on his bedroom wall at his home in Maryland. Two years later, the paper reminds him that his journey to Chapel Hill wasn’t an easy one.

To improve his grades after high school, Perlin first studied at Howard Community College in Columbia, Maryland, while he also worked full time as a shift manager at Chick-fil-A. When he opened his mail after work one day and saw his acceptance letter from UNC-Chapel Hill he couldn’t believe his eyes.

“I reread it three times because I couldn’t believe it,” Perlin said. "It was definitely a journey to get here. But oh, man, it’s more than worth it, I’d say.”

On Dec. 12, the senior studying broadcast journalism at the Hussman School of Journalism and Media will finish his Carolina journey and fulfill one of his childhood dreams as he graduates from UNC-Chapel Hill.

Though it took longer than he hoped to arrive in Chapel Hill, Perlin was committed to making the most of his time here. The Tar Heel has been involved with the student-produced broadcast shows Sports Xtra, Carolina Week and Carolina Now. He has also worked with the ACC Network, served as a high school football production assistant at WRAL and assisted on a documentary on Carolina’s field hockey team.

“Two and a half years ago, I didn’t know how to use a camera,” Perlin said. “I think one thing that the J-school does is give you opportunities. If you put in the work, it will give you options. I was lucky enough to be able to anchor Sports Xtra and Carolina Week, but I also got good experience turning in content — what makes a news package and a sports package good, how to package information correctly and how to improve my writing.”

Soon, Perlin will take all he’s learned from those experiences and move to Baton Rouge, Louisiana, where he will be an on-air news reporter and multimedia journalist at a local ABC station, WBRZ. He knows the knowledge and skills he has acquired from Hussman and his various projects will help him be successful in his future career.

“I just signed my contract, and I am beyond thrilled,” he said. “I am so excited to have the opportunity to live in a brand new area and do something I love.”

But not before he dons his Carolina Blue cap and gown and attends Winter Commencement to celebrate his journey.

“I can’t believe that I was able to make a dream of mine a reality,” he said. “I never in a million years thought that I’d be able to come to Carolina. And here I am. It’s amazing. It’s surreal. I put my cap and gown on and realized this is really happening. I really did this.”