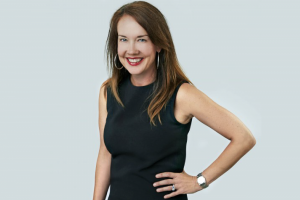 Margaret Johnson ’91 was recently named “Creative Person of the Year” by Campaign US for her work with Goodby Silverstein & Partners (GS&P), where she serves as chief creative officer and partner.

A business magazine covering advertising, media, marketing and commercial creativity, Campaign US awarded Johnson the honor as part of its 2020 Media Awards, which celebrate excellence, effectiveness and creative thinking in the media industry.

“I’m thrilled to receive this honor from Campaign US. 2020 was a turbulent year for the advertising industry. But it has also been a great opportunity to provide levity in an otherwise dark time — and to creatively address many of the social issues facing society,” Johnson said. "I'm lucky to have had this stage during a year we will never forget, and I'm grateful to the UNC Hussman School of Journalism and Media for preparing me for the experience.”

Johnson’s agency, GS&P, received the Campaign US “Advertising Agency of the Year” award for 2020.

Johnson, a 24-year veteran at GS&P, has led the creative department at the agency since 2015.

“The Campaign US ‘Creative Person of the Year’ award honors an individual who demonstrates a commitment to creative excellence by consistently introducing culture-shaping work,” said Alison Weissbrot, an editor with Campaign US. “Our esteemed panel of brand marketer judges determined that after 24 years of achievements at Goodby, Silverstein & Partners, Margaret Johnson was clearly deserving of the recognition."

In announcing the win, Campaign US praised Johnson’s innovation, noting such projects such as a partnership between Doritos Cool Ranch and the augmented reality app Sway that helped the #CoolRanchDance challenge, introduced at the Super Bowl, reach a wider audience and propel sales; as well as the PayPal’s Independents on 5th: Shoppable Holiday Windows campaign, which highlighted both the online payment system and five unique small businesses.

Johnson’s work with television spots like Cheetos’ Can’t Touch This and Samuel Adams’ Your Cousin from Boston were also cited for their innovative use of humor.

Campaign US also recognized Johnson’s social advocacy. Johnson is a founding member of the 3% Conference, an organization focused on increasing the number of female creative directors. Also, Johnson created the nonprofit Daughters of the Evolution. The organization’s app, Lessons in Herstory, highlights the contributions of women in history.

She also led GS&P’s work on the Not a Gun campaign, which drew attention to police brutality against Black people, and Respond2Racism, which focused on the surge in racist incidents against people of Asian descent that accompanied the COVID-19 pandemic.