Michael Jordan and the Jordan Brand pledge $1 million to support Ida B. Wells Society’s efforts to increase diversity in the field of investigative journalism 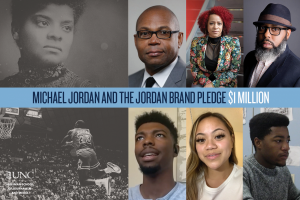 A $1 million grant from the Black Community Commitment made by basketball legend Michael Jordan and the Jordan Brand will boost the Ida B. Wells Society for Investigative Reporting’s efforts to increase diversity in the field of investigative journalism with outreach efforts aimed at aspiring young journalists of color.

The grant, announced in May, will enable the Society to expand its college internship partnerships, build a summer journalism program at a historically Black North Carolina college, and launch a yearlong high school journalism project at a majority Black and Latino public high school in that state.

The Ida B. Wells Society, housed at the Hussman School of Journalism and Media at UNC-Chapel Hill and founded in 2016 to train and support reporters of color who want to pursue investigative and accountability reporting and to increase and improve reporting on racial inequality, is one of just three organizations in the country to be named as part of the latest efforts toward the pledge.

Michael Jordan and the Jordan Brand’s sweeping 10-year, $100 million Black Community Commitment pledge supports social justice, economic justice and education and awareness. In a joint statement in the wake of the murder of George Floyd, Jordan and Jordan Brand representatives said, “Black lives matter. This isn’t a controversial statement. Until the ingrained racism that allows our country’s institutions to fail is completely eradicated, we will remain committed to protecting and improving the lives of Black people.”

At a time when the conventional wisdom about this country and its history is being reexamined and challenged by people of color, the Ida B. Wells Society sees the role of equipping more journalists with investigative skills as essential to furthering that commitment.

“To be one of just three recent recipients named in this round, alongside beacons of the Black community such as Morehouse College in Atlanta and the Smithsonian Institution’s National Museum of African American History and Culture in Washington, D.C., is a tremendous honor,” said the Society’s Director Rhema Bland. “And we’re honored to follow the economic justice, legal and voter rights groups who received Black Community Commitment grants in 2020 and 2021. I think it speaks to the work we do and the impact we aspire to have on the journalism industry and our democracy as a whole.”

Four acclaimed journalists founded the Ida B. Wells Society in 2016 to build the presence, profile and power of journalists of color in the field of investigative reporting.

Hannah-Jones, the Knight Chair in Race and Journalism at Howard University, was inducted into the American Academy of Arts and Sciences this year. An alumna of UNC Hussman School of Journalism and Media, she was also honored earlier this year as an inductee of the NC Media & Journalism Hall of Fame. She won the Pulitzer Prize for commentary last year for her essay on slavery, race and history in The 1619 Project, an initiative of The New York Times Magazine created by Hannah-Jones, which was published August 2019. She has also won a MacArthur Foundation “genius” grant, Polk Awards in 2019 and 2015, a Peabody Award and many other professional honors.

“Investigative reporting is the most important reporting in our democracy,” said Hannah-Jones. “It’s the reporting that holds power accountable, that unearths the way it’s wielded, that tells the stories that people don’t want told. Our democracy is in crisis as politicians are advancing a wave of voter suppression laws across the country and journalists must step up to be the firewall for our democracy. That makes the work we do as a Society and the substantial support of Michael Jordan and the Jordan Brand so critical in this moment.”

As racial inequity continues to roil the national landscape and people of color continue to be underrepresented in the newsroom — particularly at top leadership positions there — the two-year grant helps the Society build on successes and create new projects focused on bringing investigative journalism skills to historically underrepresented high school and college students while helping them build networks that foster future leadership opportunities within the industry.

“This grant will help the Society create a pipeline of talent for the media industry that is reflective of the country we live in,” said Nixon. “That pipeline of diverse talent is a potent force for combating racial injustice in this country.”

With the help of the Black Community Commitment grant, the Society intends to expand its existing internship program for college students and recent college graduates, partnering budding talent with major news organizations like The New York Times, the Miami Herald, ProPublica, the Associated Press and the USA Today Network around the United States.

The Society also plans to launch an All-Star Investigative Summer J-Camp, starting in July of 2022, that will bring students from majority-Black and Latino and historically disadvantaged schools together for an immersive, multidisciplinary training program in partnership with an historically Black college.

This fall, the Society will also launch a yearlong high school journalism class “adoption” project. With assistance from the North Carolina Scholastic Media Association, the Society will partner with a journalism class at a majority Black and Latino public high school in Durham, North Carolina. The Society will bring in top-level investigative reporters from the Triangle area and from around the country to Durham to provide ongoing mentorship and coaching throughout the year as students work on long-term investigative projects.

Those young Black and Latino aspiring journalists harbor a powerful potential. Together, the Society and the Black Community Commitment will lift up that potential and strengthen young voices eager to investigate and tell the stories of an increasingly diverse nation.

The Society and the Commitment: Partnering for change

Sanders, investigative reporter and Society co-founder, said that the power to change lives and improve the way entire systems work for communities lies within watchdog journalism.

Through the grant, the Society hopes to reach as many as 200 high school and college students over the next two years — a whole new generation of diverse talent transforming how stories are told.

“Our Jordan Brand family is driven by a promise to create a future bigger than ourselves,” said Jordan Brand President Craig Williams. “The work of the Ida B. Wells Society has common roots in our Black Community Commitment, reframing stories from the community, opening up new spaces of access and inspiration, and advancing social justice. We look forward to supporting young, diverse talent, and helping to change the landscape for investigative journalism.”

Since its founding, the Society has offered membership for all interested journalists and students at no cost. The free membership allows the Society to create more equitable access to information and opportunities that can help members develop and grow their journalism skills. For more information, please contact Society Director Rhema Bland at rhema.bland@unc.edu.