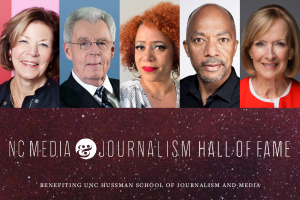 The NC Media & Journalism Hall of Fame announces the induction of five game-changing industry leaders at its annual gala event on Friday, April 9, 2021, at 6 p.m. The gala will be held virtually via an online platform for the first time in its history, featuring musical performances by Mandolin Orange and Steep Canyon Rangers. Both celebrated bands have strong ties to North Carolina.

Rebecca Darwin ’75, Peter Gammons ’69, Nikole Hannah-Jones ’03 (M.A.), Torod Neptune and Judy Woodruff will be inducted into the Hall of Fame in recognition of the remarkable influence they have had in their respective fields of media and journalism.

Rebecca Darwin, co-founder and CEO of the Allée Group, helped create its popular Southern style magazine Garden & Gun. Peter Gammons is one of America’s most celebrated baseball sportswriters and broadcasters. Nikole Hannah-Jones is a Pulitzer Prize-winning investigative reporter covering civil rights and racial injustice for The New York Times Magazine and launched the groundbreaking 1619 Project. Torod Neptune is senior vice president, global communications and corporate marketing and chief communications officer at Medtronic, one of the largest medical device companies in the world. Judy Woodruff is anchor and managing editor of the PBS NewsHour and has received scores of awards for her coverage of politics and news for more than four decades at NBC, CNN and PBS.

This event not only celebrates the honorees, but it also benefits the UNC Hussman School of Journalism and Media, which has a critical role in developing future leaders in the media and journalism professions. Rochelle Riley, director of arts and culture for the City of Detroit — a 2019 NC Hall of Fame inductee and 1981 UNC Hussman graduate — will serve as the evening’s master of ceremonies.

Rebecca Darwin — “It is an honor to be inducted into the NC Media & Journalism Hall of Fame, especially when I reflect on how I got here. I actually fell into the world of media, but magazines were in my blood. My path was not typical, and I started out on a different path, but you can see the rest is history. I don’t believe we at Garden & Gun have necessarily broken all the rules, we have been original and thought big, but we have succeeded and grown to be a lifestyle brand because at its core it is an old-fashioned magazine and honors solid journalism. Print is not dead.”

Peter Gammons — “I am honored to be inducted into the NC Media & Journalism Hall of Fame at my alma mater where I began my career writing on The Daily Tar Heel. My love of baseball and being a huge fan made me want to start writing and letting the fans get a glimpse into the locker room and change the way baseball was being written. I’m so grateful to and serve as an inspiration to the younger generation and feel I have a responsibility to the profession. I love to share my story and help them cover the sport they love.”

Nikole Hannah-Jones — “This is such a tremendous honor to be among such an illustrious group of honorees, some of whom I have watched my entire life. You know, this is a very surreal moment for me. I never knew any journalists in real life, and yet I can’t remember a time when I didn’t love and study the news and got my first letter to the editor published at 11 years old. I’ll never forget how that felt — the power of journalism and having a voice to push back against unjust narratives. Journalism is my mission, and no matter how hard it gets, I could not imagine what else I would do with my life.”

Torod Neptune — “As a proud North Carolina native, I’m even more thrilled about being recognized not only by the Hall of Fame, but by several of my hometown peers, colleagues and friends. But beyond the honor of this recognition, I know we all appreciate the significance of this moment — the moment that we are experiencing by society. The challenges are substantial, and they take on more significance with each passing day. Even as I think about these challenges, I’m optimistic and hopeful. The challenges we confront are where and perhaps why our work takes on such significance and meaning.”

Judy Woodruff — “As someone with North Carolina roots, I am thrilled to be joining such a distinguished group of honorees, this year and every year since the Hall of Fame was established. There is no more important time than now to reflect on the vital role of journalism and a free press in our democracy, and for those of us who work in the field to rededicate ourselves to the values that drew us here in the first place: honesty, accuracy and fairness. As a woman, I especially embrace the opportunity to shine a light on women journalists who’ve paved the way for the rest of us, and to do all I can to ensure doors are always open for women in the future.”

About the NC Media & Journalism Hall of Fame

Founded and administered by the UNC Hussman School of Journalism and Media, the Hall of Fame recognizes diverse individuals and exceptional leaders with ties to North Carolina who demonstrate leadership in their spheres of influence, while exemplifying the highest professional standard and commitment to inspiring and advancing young people in media and journalism careers. A committee of professionals and faculty review nominations to select each year’s nominees. Since its founding in 1981, the Hall of Fame has celebrated nearly 200 professionals in advertising, journalism, public relations and related fields.