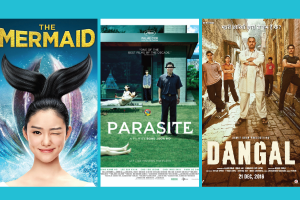 What do a tale about a mermaid, a violent parody of capitalism and a beat-the-odds story of defying gender norms have in common?

They represent a sampling of Asia’s highest-grossing films and television shows and content up for study in Associate Professor Joe Czabovsky’s “MEJO 490: Asian Entertainment Media and Marketing” course this semester.

The course, which meets weekly on Wednesday evenings, isn’t just about watching groundbreaking entertainment like “The Mermaid,” “Parasite” and “Dangal,” but about examining all the public relations, advertising and marketing tools used to amplify the entertainment pieces’ footprints.

“Why did some of these films and shows do well in their own country but not in others? What are universal tools used to promote entertainment content around the world? What are the culture-specific biases that show up in marketing preferences? These are the types of questions I want students to explore during the course,” Czabovsky said.

Czabovsky’s own interest in Asian culture — he did film work in China and the Philippines as an undergrad at California’s Chapman University — as well as UNC Hussman’s focus on global education prompted Czabovsky to create the new course this fall.

“The world keeps getting smaller and smaller,” Czabovsky said. “Our students, even if they never leave the United States, will work for global brands, global companies. That means they need to think globally.”

“During the pandemic, in order to keep up the global enterprise that is such a mark of this school, Joe conceived of and led a really deep dive that shows how much can be done internationally even when you can’t get on airplanes,” King said. “Through creative professors like Joe using the new tools they’ve developed and mastered over the past year and a half, our students have continued to be exposed to different cultures around the world.”

This academic year, Czabovsky will also teach “MEJO 437: Media in Asia,” a course that allows students to learn about a range of Asian media agencies, from newspapers to television stations. The course will travel to Japan and Korea during a Maymester section. Maymester courses are two-week intensive courses held in May designed to be immersive, fast-paced and hands-on. During a more traditional spring semester-long section of the “MEJO 437” course, students will visit Asia virtually.

“Media markets in East Asia are some of the most dominant emerging markets in the world and are bound to have an influence on our students' careers as communicators,” said Liana Pinner, director of Hussman’s global, immersive and professional programs. “These courses also give a look into how a culture that varies greatly from U.S. culture influences the media. Press freedom is also different from country to county, hopefully giving students insights into how to work with individuals from these markets in the future, as well as giving them a greater appreciation for press freedom in the U.S.”

Below are scenes from Czabovsky's Maymester 2019 trip to China. Pictured left to right, Czabovsky at the Great Wall, "MEJO 437" students at a restaurant in Shanghai, China, and students Samantha Hopkins ' 21 and Shandel Menezes '20 on the Great Wall.

For student Francesca Del Posso ’22, herself an international student from Rio De Janerio, Brazil, the “MEJO 490” course offers a chance to dive into her passion — marketing — from a global perspective.

“Not only am I an international student, but I also love learning about new cultures. As globalization rises, so do marketers' need to understand cultural differences, both obvious and subtle,” Del Posso said. “Consumers have different wants, needs and expectations, and therefore, segmentation is crucial for utmost consumer satisfaction. The difficult part, as we've seen in Joe's class, is retaining authenticity when marketing to different segments. I loved learning about the reason for changes in movie poster design and trailers between different markets.”

Those reasons for change in promotional materials might include less violent or sexual promotional imagery in more conservative countries like India, Czabovsky said, or the rewording or explaining of promotional copy that contains country-specific references. The Korean children’s game that gives the popular Netflix series “Squid Game” its moniker is described in the first episode, helping international audiences understand the reference.

“Squid Game” is currently Netflix’s most-watched show ever with a storyline of heavily indebted people competing in violent games for money. It won’t be viewed as part of the class — Czabovsky set the syllabus before its premiere — but the class will talk about it.

“That show dropped perfectly into our lap, and it showcases something we’ve been finding: films or television shows that center around very universal themes or concerns, in this case competition and income disparity, do well across markets,” Czabovsky said.

The universal themes of “Parasite,” another Korean export, have made it a favorite for Del Rosso. “From the social commentary to the storyline to the beautifully shot scenes and complex characters, this film's incredible success is no surprise to me,“ said Del Rosso of the Oscar-winning film that comically examines the interactions between a low-income and high-income family.

Other films on the course’s schedule include: “Travelers and Magicians,” a 2003 film from Bhutan about a young man yearning to escape village life; and “Spirited Away,” a Japanese anime film from 2001 about a little girl trapped in a spirit world. And what Asian cinema course would be complete without a viewing of “Mothra vs. Godzilla”? The class watched that classic 1964 Japanese film first.

As students “travel” across time and nations with the course content, Czabovsky hopes they come to a destination as important for their professional development as understanding marketing tools and metrics — understanding people.

As he puts it: “Ultimately, I want this class to teach students about humanity, about how different people across the world can be, but also, how very similar we are.”