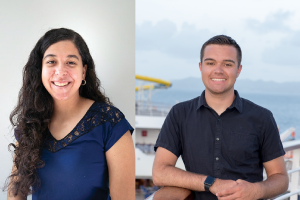 Stepping into a classroom where no one looks like you can be daunting, and those feelings — as you straddle different cultures and look for professional role models — feel isolating if you don’t have a place to share them.

Angelica Edwards ’22, a Latina student at the UNC Hussman School of Journalism and Media, knows what that feels like, which is why she and fellow UNC Hussman student Julian Berger ’22 co-founded a student chapter of the National Association of Hispanic Journalists at UNC in August 2020.

At the organization’s inaugural event on Feb. 23 at 6 p.m., Edwards and Berger will moderate a discussion with Emmy Award-winning Latina journalist Maria Hinojosa for a virtual discussion on her career and recent memoir “Once I Was You: A Memoir of Love and Hate in Torn America.”

Hinojosa, a veteran Mexican-American journalist, has worked in television and radio for media outlets like CNN, PBS and NPR. She is also the founder of Futuro Media Group and launched “Latino USA,” one of the earliest public radio programs devoted to the Latino community.

“Speaking to a room full of Latino journalists is one of my all-time favorite things to do. What our newsrooms and journalism need is more (Latinos),” Hinojosa said, noting that the media’s representation of Latinos — America’s second-largest demographic — both in the newsroom and in the news, tells a critical part of the nation’s story.

“For the students, it’s important that they have an organization that they can engage with. For them, this new NAHJ chapter opens a lot of doors and creates a lot of opportunities for leadership,” Cuadros said. “It also expands our capability for diversity and inclusion here at UNC Hussman.”

“Maria Hinojosa has always been a journalist who pushes the envelope to bring new perspectives to big and small stories. She is both a reporter’s reporter and 21st-century entrepreneur,” said Susan King, dean of UNC Hussman. “We are glad to have the opportunity to support our NAHJ students in hosting her.”

Established in 1984, the National Association of Hispanic Journalists (NAHJ) is a Washington, D.C.-based organization dedicated to the advancement of Hispanic journalists in the United States and Puerto Rico.

Hinojosa, an NAHJ member since the late 1980s, called the organization foundational in her career. “The NAHJ was so important to me as a young journalist because it gave me an understanding of the community, my place within my profession and within my comunidad,” Hinojosa said.

In addition to networking and speaker events, Edwards founded the chapter to give media and journalism students deeper learning and perspective on Latino issues such as immigration and reporting in Spanish-speaking communities.

Edwards, a Daily Tar Heel photographer who hopes for a career as a visual journalist, said a common misperception is that all Latinos speak Spanish. Many, like Edwards, a Raleigh native with an American father and a mother from the Dominican Republic, grew up speaking English at home.

Edwards’ Spanish skills have improved — mainly after a trip to her mother’s native Dominican Republic — but she’s still squashing stereotypes about the Latino narrative.

Throughout her career in media, Hinojosa told the narrative of Latino communities — often as the only Latina in the newsroom.

Her book plumbs her own journey from Mexico to the U.S. in the 1960s, as she examines the history of immigration in America.

Cuadros said that despite being a growing demographic, the stories of Latinos often go untold.

According to the U.S. Census Bureau, Latinos make up 18 percent of the nation’s population — 9.6 percent in North Carolina, where the population has grown to nearly 1 million from 75,000 in 1990.

“The problem is we don’t have enough Latinos, or people of color in general, represented in the newsroom,” Berger said.

While nearly 40 percent of Americans identify with a race or ethnic group other than white, only 21.9 percent of the salaried workforce among newsrooms are people of color, according to a 2019 News Leaders Association Newsroom Employment Diversity Survey.

Berger, raised in a Puerto Rican family now in Charlotte, hopes organizations like UNC’s NAHJ chapter will change that, as they empower a new generation of Latino journalists.

Like Hinojsa, he aspires to a career in television news.

“I can’t wait to ask her about how she got her start in journalism,” Berger said. “It’s pretty amazing that we have this opportunity this early in our chapter’s history.”

The student NAHJ chapter is open to all students at UNC regardless of race or academic major. Interested students can reach out to uncnahj@gmail.com or via the group's interest form.