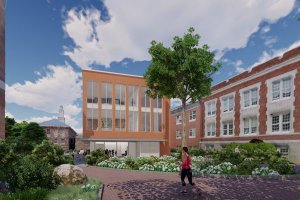 UNC Hussman’s new state-of-the-art Curtis Media Center is on its way, after demolition occurred on the former Phillips Annex site on Polk Place this month. It clears the way for a leading-edge flexible space that brings together students and faculty around emerging technology in a collaborative environment.

The Curtis Media Center is made possible by a transformative $10 million gift from the Curtis Foundation — the second-largest single gift in the school’s history. The foundation’s trustees are Hussman alumnus Don Curtis, chairman and CEO of the Curtis Media Group, his wife Barbara — who passed away in March of 2019 — and their daughter, Donna Curtis McClatchey, also an alumna. Read more about the family and their contributions to the school here.

Their generosity supports efforts to help students gain a foothold in a rapidly changing industry. The new collaborative space will challenge students to learn and practice their craft while working in teams.

UNC Hussman students Chip Sweeney ’21 and Jilly Kuehn ’21 produced this video on the work on the Curtis Media Center site this year, culminating in a time-lapse of the demolition. Watch below to see Don Curtis, Donna Curtis McClatchy and Abigail Curtis McClatchey touring the site in February of this year along with Dean Susan King and Senior Associate Dean for Undergraduate Studies Charlie Tuggle, who later celebrated the demolition at a safe social distance this month.