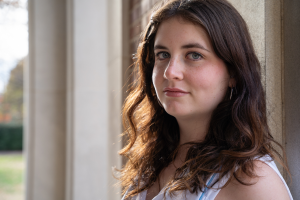 A media and journalism major with a music minor, Mary King loves journalism — and is passionate about music, too. When she graduates from UNC-Chapel Hill this weekend, this classical soprano with perfect pitch says she’ll be happy as “a writer who can’t stop editing,” with music as her go-to for work/life balance.

Perfect pitch: it’s a rare ability that few are born with, an innate talent for identifying or re-creating a given musical note upon hearing it, without benefit of a reference tone. December UNC Hussman School of Journalism and Media graduate Mary King  says, “I didn’t do anything to deserve it. I happened to be lucky and was born with it.”

It’s a talent that helped her nail her audition with the UNC Chamber Singers this fall. The rehearsals and concert performances have provided the academic/life balance she’s been seeking.

She’s back in tune after finding herself nearing burnout last spring. The demands of the J-school, the ongoing pandemic and the nonstop challenges after working her way up to audience engagement editor with 30 staffers reporting to her at The Daily Tar Heel were taking a toll. After careful consideration, she stepped down from the independent student newspaper some three weeks into  the spring semester.

“I credit The Daily Tar Heel,” she says now. “That was my jumping-off point, where my first articles were published, and I am forever grateful.”

“A remote internship from the beach — it doesn’t get any better than that,” she recalls of her first experience as a professional journalist. The opportunity boosted her confidence in her ability to find and write a good news story.

That fall, she pitched a story she’d written in Associate Professor Paul Cuadros’ MEJO 253 “Public Affairs Reporting” class to her former colleagues at the Indy. She was thrilled when they accepted it — and paid her for it, and for a number of other stories she sent their way.

“That emboldened me to pitch my work to other editors,” she says, like a piece she’d written in adjunct faculty member Angelia Herrin’s MEJO 356: “Features Writing” that was published by The Charlotte Observer.

She describes Herrin and adjunct faculty member John Robinson as her biggest cheerleaders and mentors.

“They believed in me and my writing even when I didn’t believe in myself,” she says, crediting Robinson’s MEJO 625 “Media Hub” course this year with helping her find her strength as a writer.

“I love to take random or niche topics and make them interesting to the reader,” she says, enthusiastic about the chance to drill down on topics like wild mushrooms, turtle necropsy and chess as a reporter with teams of other Media Hub Stembler Scholars.

King encourages her writer friends to pitch their news stories by telling them, “The worst thing that can happen is they say ‘no.’ Why not give it a go?”

As a junior, King had just updated her LinkedIn resume when a Red Ventures recruiter reached out to her via the app about a summer 2021 editorial internship possibility with the 20-year-old private company headquartered on a 180-acre campus in the town of Indian Land, South Carolina, just south of Charlotte.

King did her research. She liked what she learned about the 4,500-employee digital media company that specializes in what some call “intent-based media.” And she liked their corporate culture.

She sent in a resume and her portfolio. After a rigorous set of Zoom interviews with four or five different people, King completed an online editing exam. She remembers being “flabbergasted and thrilled” when she got the job.

This summer as a virtual reporter for Red Ventures’ CNET — a media website that publishes globally on consumer electronics and technology — King collaborated with a global team of editors and writers and enjoyed writing tech news and reviews that generated more than 1.25 million page views. She had to dive into tech research to prep for the job.

“What a cool learning experience,” she says now. “I got to pivot into a topic I wasn’t as familiar with — that’s some journalism learning right there.”

She particularly enjoyed one assignment, when Netflix gave her advanced access to a season of its “Outer Banks” series and she wrote a review from the perspective of a North Carolinian who lives at the coast.

Red Ventures invited King to an end-of-summer conference for interns, putting her up in a hotel on the sprawling corporate campus. The festivities included a case competition to develop an editorial voice and communications strategy for an imaginary new streaming service, “RedTV.” King and her team won the competition. The prize was a water bottle. And, shortly after she got home to Kure Beach, an offer to return to the company in an editorial role after she graduates this month.

Songs in the key of (a balanced) life 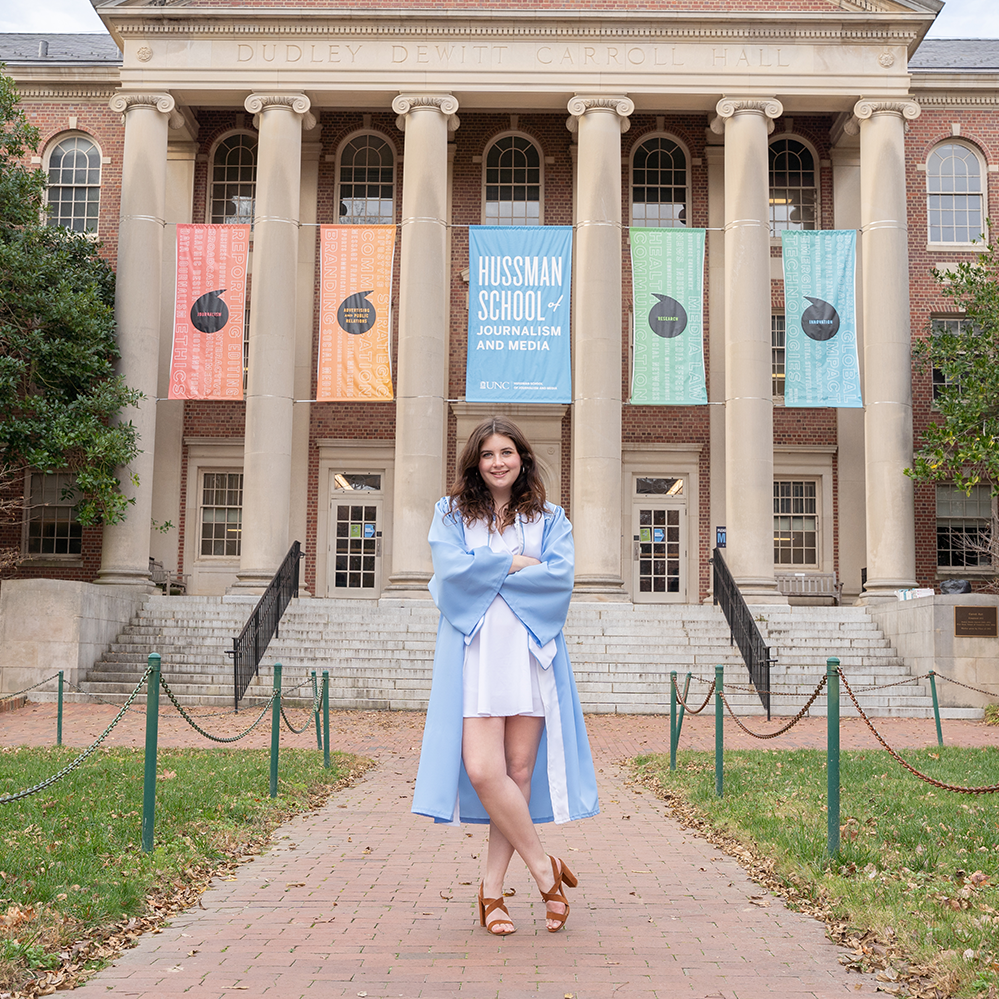 Last spring, King gained another mentor in a newly hired investigative journalist, photographer and author, Assistant Professor Erin Siegal McIntyre, who teaches MEJO 553: “Advanced Reporting.” Siegal McIntyre has taken King and many other students by storm with her disarming honesty and willingness to introduce her students to an extensive network of journalists.

In her last semester this fall, King found herself looking forward to Monday and Wednesday mornings in Carroll Hall for MEJO 557 “Advanced News Editing” classes with Associate Professor Andy Bechtel.

“He’s been such a great teacher,” she says. She was honored when Bechtel and Robinson recommended her to The New York Times this fall.

“I never got an assignment, but I can say I technically signed up as a stringer for The New York Times,” she says, a lilt in her voice.

Robinson calls her “one of the purest writers I’ve edited either at this University or in my time in the newspaper business. She has the ability to tell you what her subject is doing and thinking as if you are there with them,” he adds. “That’s all great. What editors are going to love about her is that she wants — she strives — to create excellence. And she makes deadline doing it.”

King finally got to try her hand at radio this fall, reporting from Carolina Connection student radio on everything from the ubiquitous falling acorns pelting passersby on Carolina’s campus to students rallying for a vaccine mandate. Hussman alumnus Brighton McConnell ’19, news director at WCHL. 97.9 The Hill, was so impressed with them that he ran some of her radio reporting on his station.

Finishing up the last of her finals last week, King speculated that she and her boyfriend, Aaron Sugarman, another DTH alumnus and December graduate, “will hit Yogurt Pump on Franklin Street one last time” in celebration, before venturing out into the world.

Does the woman with a (soprano) radio voice, who’ll graduate this weekend with highest distinction, think of herself as a radio reporter? Editor at heart? A writer? She sums it up best: