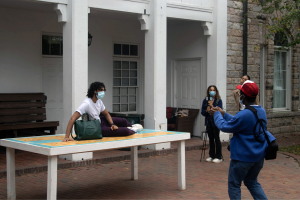 Carolina Covenant Scholar Anwar Boutayba ’23 was born in Morocco and grew up in Casablanca, its largest city. His Moroccan family is indigenous to the kingdom at the northwestern corner of Africa.

When he was seven years old, Boutayba’s mother met a Moroccan expat from North Carolina in an elevator. When they got married, the young boy suddenly found himself in Raleigh, North Carolina.

“I didn’t speak a lick of English. We spoke French and Berber,” says the UNC Hussman School of Media and Journalism junior, who looks back fondly on the episodes of “I, Carly,” “Wizards of Waverly Place” and  PBS Kids’ “Word Girl” — “my mom watched it, too,” he says — that helped him gain mastery of the English language.

He moved out of English as a Second Language classes at Green Hope Elementary School in the Wake County Public School System within the year.

Fast-forward to high school. Boutayba was attending Raleigh Charter High School. He applied to a number of schools and had been accepted at the University of North Carolina at Chapel Hill.

But “I had an escapist view at the time,” he says. “I wanted to get out of North Carolina.”

That’s when he came to Admitted Students Day and a financial aid officer explained that he qualified to be a Covenant Scholar with a debt-free path to a degree from Carolina.

He was floored. What that meant to him, and to his family, moved him to act.

“The Carolina Covenant program changed my life,” he says now. “I literally committed to UNC the second I got home.”

The program was established in 2004 to help students who have been admitted solely on the basis of their academic achievements achieve a debt-free graduation through the combination of grants, scholarships and a work-study job.

The Covenant Scholars program offers mentoring, academic and personal support services to students whose household income is less than 200% of the federal poverty level. What started with a first class of less than 300 students in 2004 has grown to support 10% of all undergraduate students today.

“I love my Google calendar”

Since arriving on campus to attend a six-week transition program for North Carolina residents known as UNC Summer Bridge in 2019 (pre-pandemic), Boutayba has flourished. That is thanks in part to mentors past, present and future. Much credit also goes to his ability to take on a mind-boggling amount of interests and internships, from his work as a Bonner Leader with the Campus Y; to a role as Co-Associate-Editor-in-Chief of Coulture magazine — UNC’s student-run fashion and lifestyle magazine — alongside his best friend Clay B. Morris ’23; to experience with L’Oreal, 1893 Brand Studio, NBCUniversal and (currently) as public relations fellow with Reese Innovation Lab. 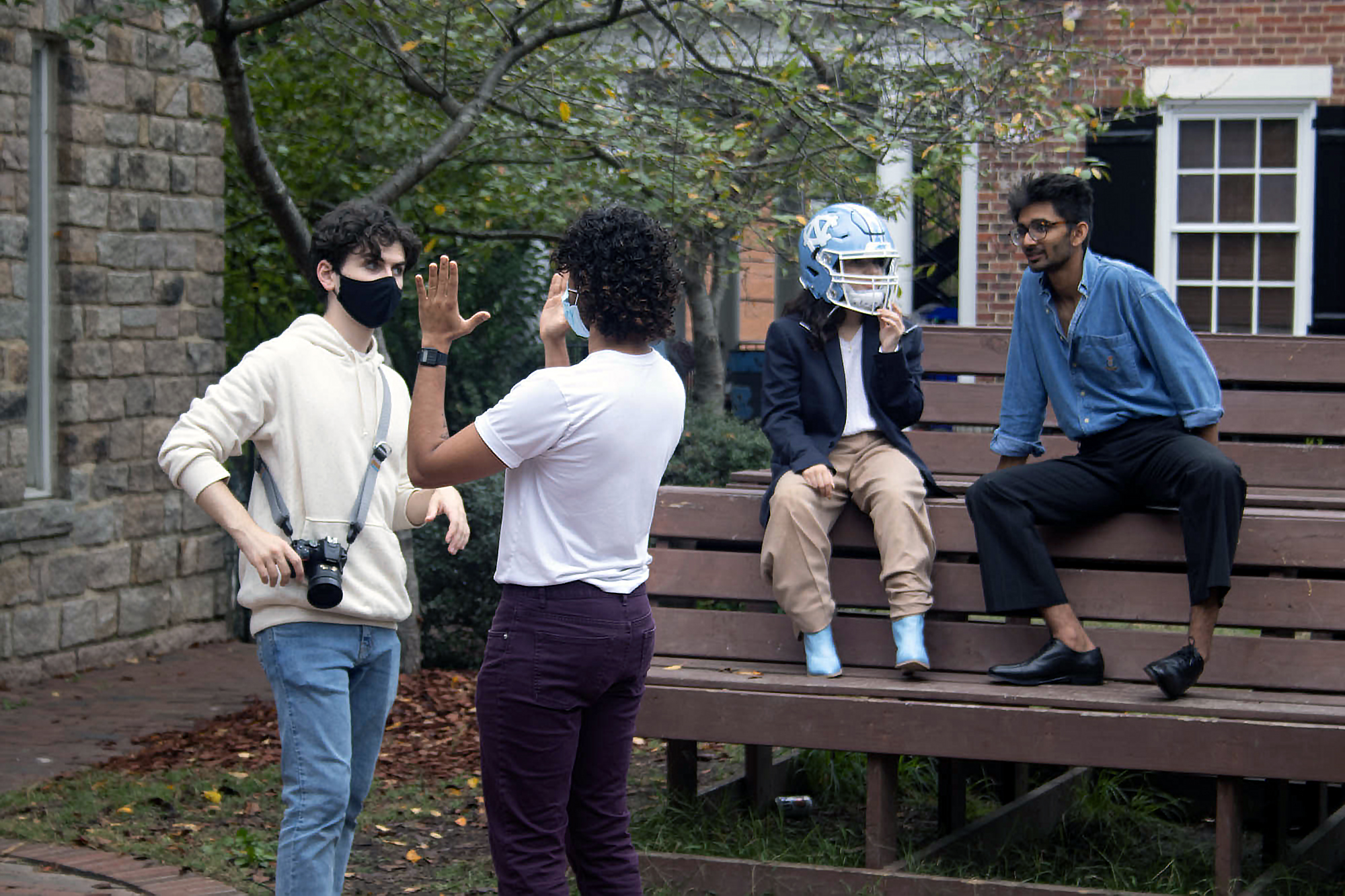 “I love my Google calendar!” says Boutayba, art directing a recent Coulture magazine photoshoot in purple pants above, when asked how he juggles it all. “School is always my number one priority. And I’m very good at asserting my boundaries. If I’m not available, I say so. It’s all about working ahead. Setting boundaries. And being passionate.”

Shonda Goward, now at San Jose State University, was the academic director for Carolina Covenant who helped him overcome imposter syndrome and taught him to fight for every opportunity to thrive at Carolina even after the COVID-19 pandemic altered the campus during spring semester of his first year.

The late Frank Kessler (1948–2021), a learning skills instructor at UNC’s Learning Center before working with Carolina Covenant students, helped further the Scholar’s already-keen writing skills. He reviewed Boutayba’s application to the University’s Robertson Scholars program, and advised Boutayba during the Bonner Leaders application process. “He helped me become a finalist, and he also helped me get into Bonner,” the advertising/public relations student and global studies double major recalls gratefully, “May he rest in peace.”

Boutayba credits time with Carolina Covenant Director Candace Powell for keeping him motivated as a scholar. She recently said about students like Boutayba, “Through the Carolina Covenant, thousands of talented students, who otherwise would not have been able to afford Carolina, have come to our University and made it better through their experiences and contributions.”

Boutayba hopes that UNC Hussman Teaching Professor Valerie “V.K.” Fields is a future mentor. “I’m in her Crisis Communications class right now,” he says, “and every time I mention that, my friends tell me ‘you’re going to learn sooooo much.’ I want her to mentor me!”

This spring, Boutayba is on track to attend Sciences Po’s Paris campus. The student of advertising, public relations and global studies looks forward to dusting off his French and traveling as far and wide as possible in search of new experiences and new recipes to try on his friends back in Chapel Hill.