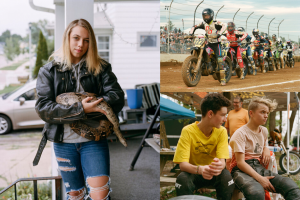 “It’s about what we do in our lives that gives us agency,” says Jackson of his first filmmaking endeavor. “What nobody can take away from us when we have nothing.”

A one-time assistant to fashion photographer Bruce Weber, this NYC-based commercial photographer with a Carolina degree has created a gritty, personal coming-of-age film (run time: 24:43). It evokes the shifting motivations and sheer willpower behind seeking to be the best at any one thing.

Respectfully and without pathos, the film — three years in the making — captures the lives of three young teens, led by then-14-year-old motorcycle racer Zaria Martens from the town of Fond du Lac, on the south side of Lake Winnebago in Wisconsin. They compete in amateur flat-track motorcycle racing, often at the Aztalan Cycle Club in Lake Mills.

“On the weekends, we get up and go racing—like other families go to the soccer field,” says Zaria’s mother Melissa Terkhorn. 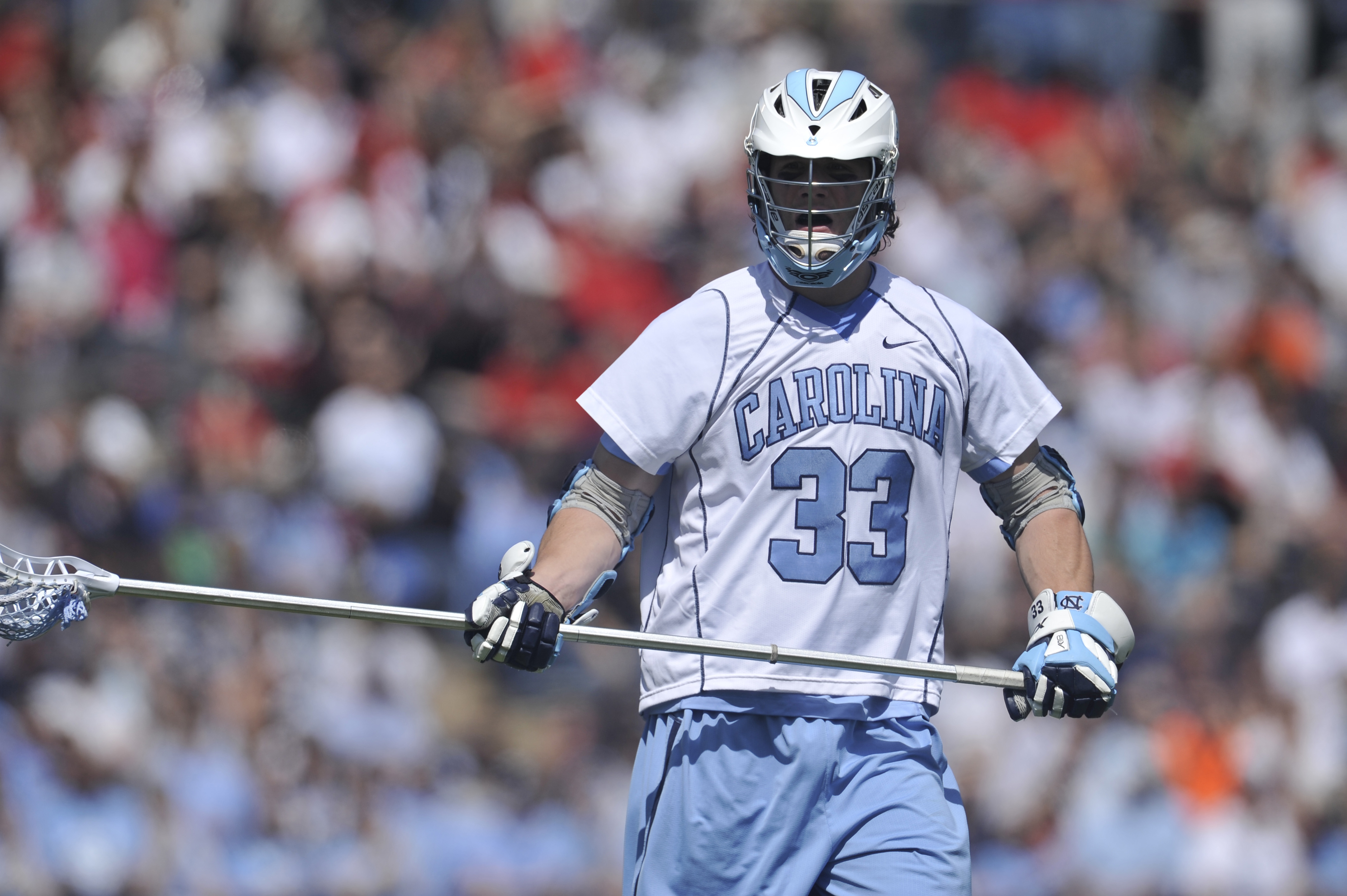 Sean Jackson arrived in Chapel Hill in 2006 from Fairfax, Virginia, as a lacrosse recruit who had competed as a swimmer, wrestler, basketball and football player and excelled in four years of lacrosse in high school.

A 6-3, 210-pound lacrosse defenseman at Carolina, Jackson played on scholarship (“All four years — my Dad wouldn’t have it any other way”) and competed in four NCAA tournaments, garnering the nickname “Action” Jackson. He was recognized as Scholar-Athlete of the Year in 2009–2010 by athletic director Dick Baddour. All this to say, he knows something about competing to win.

And yet, the arc of the narrative in his debut film is not how a young racer vanquishes all contenders to take home a trophy.

“Creatively, my intent was to omit that altogether,” says Jackson from his Greenwich Village apartment about the “go fast and win” trope.

Instead, Zaria Martens’ story is told by introducing us to her community: her father, Brian Martens, a mechanic and racer who laconically recounts the “40 pins and screws in my body.” Her mother, an ICU nurse, who says, “We always wanted to give her confidence. And I think if anything that’s what racing has given her.” Through the stories told by a wider circle of friends who make up the family’s racing community we get to know Zaria and what motivates the competitor and her young racing friends.

Making the film the way he did, pitching a tent in the backyard of the family’s home, attending races with Zaria’s family and their friends — allowed Jackson to showcase a more introspective side of competitive sports. He captures a nonlinear slice of life that encompasses a 70-year-old man looking back with no regrets on his racing days; a grieving father who lost his daughter, Charlotte, to a racing accident; and Zaria and her friends, figuring out where their parents’ dreams end and theirs begin.

“I grew up in an environment that allowed me to excel in a short period of time,” Jackson says of his own athleticism. “I wanted to attend college at UNC-Chapel Hill. And my lacrosse skills allowed that to happen.”

In the young woman motorcycle racer, Jackson sees himself. He hopes the film becomes something of an existential consideration of the self for anyone who watches it.

“She is who I would’ve become had I been born somewhere else,” he says, if he’d grown up with parents who wanted to teach him how to put an old motorcycle together and take him to a flat-track course on weekends.

Zaria Martens was three when she first got on a motorcycle. “I had a little PW50 with training wheels,” she says.

Now, as she prepares to finish high school early in order to move up to the professional level as a racer, she says it was important that Jackson was involved in documenting her earlier racing life.

“Racing is my whole entire life,” she says. “Not a lot of people would be able to capture the dedication and work it takes to race at this level if they didn’t have an understanding themselves of what it takes to be a competitive athlete. Sean could imagine it.”

And she’s grateful for the film’s authenticity, how it captured the time and effort it takes to excel.

“I've missed weddings and birthdays and family events to go racing,” she says. “Once my family and friends saw the film, they understood more of what it takes.”

A public relations major turned CNN staffer who moved to Manhattan to apprentice for Weber, Jackson describes himself as a social-documentary photographer whose work is a visual expression of who he is — through work for clients like The Observer, Tommy Hilfiger, Levi’s and Ford Motor Company.

“Having a journalism degree from Carolina was an ace up my sleeve,” Jackson says of transitioning to the competitive world of storytelling through fashion and commercial work. He learned to write, to tell stories and to manage time at UNC, drawing lessons about character from his coaches and inspiration from classmates like Allen Mask ’10.

"We came up together. I was trying to follow on his heels. He was so far ahead,” Jackson remembers of Mask, now an entrepreneurial business executive.

“Sean is a powerhouse talent,” Mask says today, “and one of the kindest human beings I’ve met.” 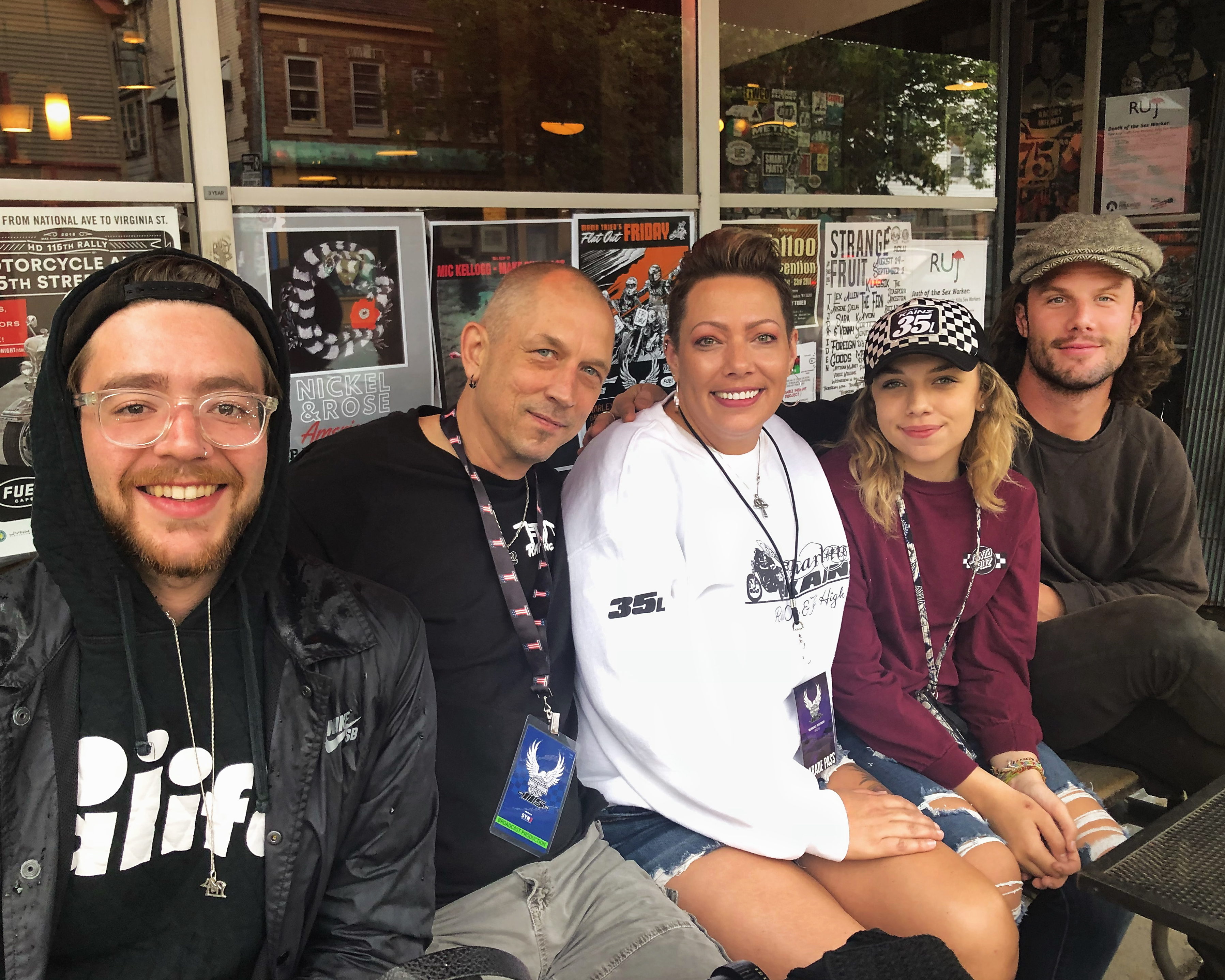 Jackson decided in 2018 to become a self-funded filmmaker. He says, “I navigated the making of ‘Race Night’ through sheer will,” and likens the experience to creating his own private film school along the way.

When he looks back on traversing the unexpected bumps along the three-year road to making the documentary, Jackson remembers calling his friend Tom Arnell at the onset of the project (Photo: Milwaukee 2018 (L to R): Tom Arnell, Brian Martens, Melissa Terkhorn, Zaria Martens, Sean Jackson).

“I needed a camera. It was the summer of 2018. Tom said, ‘I’m coming with my equipment. We’re going to make this right,’” says Jackson, explaining how Arnell became co-producer and director of photography on the project.

“We rented a van, pitched a tent, ate a lot of PBJ sandwiches and shot a lot — then went back the next summer for many more days of shooting.”

When it came time to edit the film and license music for it, Jackson says he realized with some trepidation, “I can’t cut a movie like ‘Guardians of the Galaxy.’ I can’t use Led Zeppelin tunes in the soundtrack.”

Instead, friends introduced him to Abdur Rahman, who worked with music video-maker Hype Williams in the 1990s. Rahman became the film’s adviser on everything having to do with music publishing and licensing. And he became executive producer of the film.

To help edit the film, he found Emmy Award-winning editor Brad Turner, whose recent work includes films Patti Cake$, Paterno and Native Son. “One of the best friendships I developed in 2020,” says Jackson now. “He knew the vision. And he could bring it to life in a sophisticated way.”

Jackson sees “Race Night” as a proof-of-concept piece that might be used to leverage a series down the line, with the support of a platform like Netflix or HBO Max.

For today’s UNC Hussman students, the young storytellers of tomorrow, he has a similar message. “There’s not going to be an application for the job you want. Get up every day and become that person. One day, you’ll wake up and be there.” He adds, “Your greatest commodity is time. Spend that with intention.”