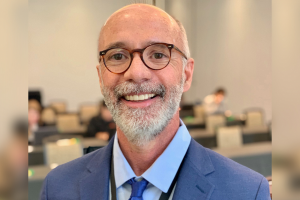 We are pleased to share that Raul Reis, dean and professor of the School of Communication at Emerson College, has been appointed dean of the Hussman School of Journalism and Media, effective July 1. An internationally recognized leader, Reis brings 25 years of experience in academia and a track record for creating nationally ranked programs that have helped Emerson prepare students for the fast-paced world of digital media.

At Emerson, a college dedicated to communications and the arts, Reis oversaw the design and implementation of 10 of the school’s 18 undergraduate and graduate degree programs, several of them ranked nationally among the best degree programs in their fields. Under his leadership, School of Communication enrollment grew significantly. In 2021, nearly half the 5,100-student body was enrolled in the school, up from 27% five years before. In turn, Reis hired 38 full-time faculty over five years, recruiting diverse expertise in new and innovative fields.

Reis has worked with faculty and department chairs to create and implement a school-wide strategic plan that has broken silos between programs and transformed teaching and learning. He coordinated the development of the school’s diversity plan, which involved a comprehensive curriculum audit to ensure equity and inclusion were integrated at every level. In collaboration with faculty, Reis also helped rewrite a digital-first curriculum that is innovative, hands-on and based on student learning.

Reis joins UNC Hussman during an exciting time of success and growth. The school has won the Hearst National Championship, the most prestigious collegiate journalism award, six out of the past seven years. Doctoral students have won the nation’s top mass communication research dissertation award more than any other school. The school recently surpassed a $75 million goal within the University’s $4.25 billion Campaign for Carolina, and this spring it will open the state-of-the-art Curtis Media Center, billed as the nation’s leading media and journalism education technology hub. Reis is well poised to continue the school’s positive trajectory.

We would like to thank the members of the search committee, chaired by Gary Marchionini, dean and Cary C. Boshamer Distinguished Professor at the School of Information and Library Science, for their dedicated efforts to bring Reis to Carolina. We also want to share our appreciation for Heidi Hennink-Kaminski who has ably served as interim dean of Hussman since January.

Please join us in thanking Gary and Heidi and welcoming Raul to Carolina.