Rebuilding Trust in America: The challenge for journalists 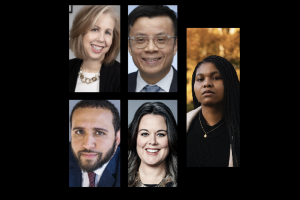 How do journalists rebuild trust?

“We all recognize that we’re facing a crisis in our information environment, which in turn is an emergency for our democracy,” said Nancy Gibbs, director of the Shorenstein Center at Harvard University, as she kicked off the Knight Foundation panel discussion “Rebuilding Trust in America: The Challenge for Journalists” on March 16, 2021.

The topic — the growing debate over the traditional journalistic value of objectivity — evolved from a conversation at a meeting of the deans of the journalism schools participating in the Carnegie-Knight Initiative on the Future of Journalism Education.

The deans of the Carnegie-Knight Initiative attended the virtual event, as well as student journalists from the Carnegie-Knight schools — including UNC Hussman School of Journalism and Media senior Ruth Samuel ’21 — who asked panelists questions about what has driven the decline of trust in news and how they approach challenges of fairness, identity and advocacy in their work.

“Walter Hussman joined our Carnegie-Knight deans' meeting in January 2020 at the Knight Foundation offices in Miami and really challenged us to grapple with the concept of objectivity and to ensure that our students consider its fundamental value to journalism,” said UNC Hussman Dean Susan King. “The Knight Foundation was able to assemble some of the nation’s foremost journalists to engage with our students in a topic of critical importance to our profession and to our country.”

Much of the panel discussion focused not only on defining objectivity but also making sure its values were extended to traditionally underrepresented communities and safeguarded amid the current polarization and misinformation in a news landscape divided among multiple platforms.

Diversity emerged as a central theme of the conversation. Lowery noted the importance of newsroom diversity in creating objective coverage that extended throughout all communities.

“Our newsrooms have to have the same diversity and complication of our country and our world,” Lowery said.

Lowery referenced an opinion piece he authored for The New York Times in June, “A Reckoning Over Objectivity, Led by Black Journalists,” in which he wrote, “The mainstream has allowed what it considers objective truth to be decided almost exclusively by white reporters and their mostly white bosses. And those selective truths have been calibrated to avoid offending the sensibilities of white readers.”

Chan also noted the need for more newsroom diversity, citing more diverse newsrooms, along with vigorous online audience engagement and community events as ways the media could better reach into communities of color.

“How, under the guise of objectivity, can journalists be cognizant of which groups they’re empowering and who they’re serving?” Samuel asked.

Chan provided background contextualizing the letters and why he felt they didn’t hinder objectivity, noting the letters had been fact-checked by staff, a large section of California’s population voted for Trump, and the letters represented one part of a wide spectrum of political views that had been given a platform by the newspaper.

“For me, to take a day to listen to people who supported [Trump] and try to understand their reasons … was a legitimate use of our platform,” said Chan, who earlier in the panel discussion noted that he always thought about objectivity alongside concepts like fairness, independence, accuracy, context and compassion.

Other students’ questions prompted discussion about the voices of journalists themselves. In an age when many journalists have personal social media platforms, what can the public know about a journalist’s personal beliefs before the journalist’s perceived objectivity is compromised?

“I think journalists should not hide who they are,” she said, noting that greater transparency of who journalists were and how they did their jobs could help with some of the public’s distrust with media, though she advocated using professional accounts to let the public know what they needed to know about a journalist professionally.

Student questions also created conversation among the panelists about balancing advocacy with objectivity. Lowery encouraged the student journalists to go to protests that they care about — but to take a notebook and camera. He suggested that budding journalists could see these events as opportunities to hone their craft and test their skills of observation as reporters.

“Go to the protest, but were it me, I’d take my notebook, I’d take my camera, I’d interview people and I’d talk to people, because if the role you want to play in our democracy is a storyteller …  what better time to get that practice and make a difference?” Lowery said.

Samuel said she came away from the panel discussion invigorated.

“It was an honor to be alongside other young student journalists and talk to some of the leading voices in the industry. Watching Wes, Sewell and Meredith dissect objectivity, challenge one another, and hear their differing perspectives was thought-provoking. This was such a unique opportunity to probe them on the obligation of journalists to community and what fair reporting could look like in action,” Samuel said after the event. “Distrust of the media isn't a novel concept, though the past four years have been extremely volatile and dangerous. As much as the media has the capacity to spur change and hold those in power accountable, institutions have also enacted harm on marginalized communities in their coverage and in the ways they engage with sources.”

Learn more and watch a video of the event here.