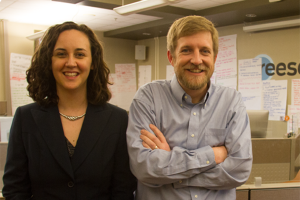 UNC Hussman School of Journalism and Media faculty members John Clark and Sara Peach have been selected as recipients of the 2014 C. Felix Harvey Award for Institutional Priorities and will receive $50,000 to help improve state government transparency through a Web application developed with students in Reese News Lab.

If you are part of a North Carolina news organization and interested in Capitol Hound, visit this page.

"This award makes it possible to give all North Carolina reporters a tool that allows them to report on their elected representatives and on the stories that impact their communities," said Clark, executive director of Reese News Lab.

"By giving Capitol Hound to reporters we hope to see an increase in legislative coverage which leads to more transparency in our state government," said Peach, Reese News Lab associate director.

The Harvey Award also will help Clark, Peach and a student team research the scalability of Capitol Hound to other states. Clark said that several media organizations have approached him about expanding the service to their respective states.

Clark and Peach led an interdisciplinary student team in a pilot launch of Capitol Hound during the 2014 short session of the General Assembly, which ran from May through August. During the pilot, a political campaign, lobbyists, lawyers and news organizations subscribed to the service in order to access transcripts and alerts. The pilot was funded, in part, by a $35,000 grant from the John S. and James L. Knight Foundation and its Knight Prototype Fund.

Until May 2014, no transcripts of North Carolina legislative sessions were available; anyone interested in those discussions had to listen to long hours of audio recordings or attend meetings in person. To solve this problem, Capitol Hound uses a combination of crowdsourcing, software and human transcription to rapidly generate accurate transcripts of government proceedings. By the day after a session, users may search for exact words spoken by lawmakers. Users can also specify keywords to receive email alerts.

The University also selected a second winner of the Harvey award, Vincas Steponaitis of the Research Laboratories of Archeology (RLA) in the UNC College of Arts and Sciences. The project, "Ancient North Carolinians: A Virtual Museum of Cultural Heritage and Archaeology," seeks to create an online interactive resource. This virtual museum will feature exhibits on North Carolina archaeology and the ancient history of the state’s American Indian peoples; resources for K-12 teachers and students, including lesson plans and inquiry-based activities; and information for field trips and heritage tourism related to archaeological sites, Indian tribes and other relevant cultural attractions within the state.

The C. Felix Harvey Award to Advance Institutional Priorities is an annual award recognizing exemplary faculty scholarship that reflects one of UNC's top priorities and addresses a real-world challenge. A selection committee led by UNC's Office of the Executive Vice Chancellor and Provost chooses the winner from a pool of faculty applications.

The award’s namesake is C. Felix Harvey, chairman of Harvey Enterprises & Affiliates and founder of the Little Bank Inc., both in Kinston, North Carolina. He graduated from UNC with a degree in commerce in 1943 and went to the Navy midshipman school, then served on a PT boat in the southwest Pacific theater during World War II.

In 2007, along with his family, Harvey made a $2 million commitment endowing the award to acknowledge UNC's significance to them and the important role Carolina has played in their lives. Five generations of Harveys have earned UNC degrees, including Felix and Margaret Harvey’s daughters Leigh Harvey McNairy and Sunny Harvey Burrows, sons-in-law John McNairy and Lee Burrows and several grandchildren.