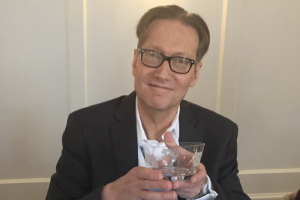 Associate Professor Emeritus Michael Hoefges, a founding coordinator of the M.A./J.D. dual degree program at the UNC Hussman School of Journalism and Media, passed away March 9, 2021, after a long battle with cancer, leaving behind a rich legacy of media law research and devoted teaching at the school.

His UNC Hussman colleagues and students remember Hoefges, who joined the school in 2003, as a kind, thoughtful professional whose calm demeanor and meticulous attention to detail permeated all aspects of his work, as well as his courageous battle with cancer.

UNC Hussman Dean Susan King recalled Hoefges’ vigorous combination of legal experience and academic acumen. She also remembered his love of research — which he continued to the end of his life.

“I never knew Michael without courage — his fight with a rare cancer was a long one and he was not only strong, a persistent fighter, but, as well, a man of grace,” King said. “When his treatments made it impossible for him to continue teaching, Michael reluctantly retired. He wanted emeritus status because he dearly wanted to keep up the research.”

Hoefges spent the bulk of his professional career at UNC Hussman, joining the school’s faculty after stints teaching at Trinity University in Texas and the University of Tennessee, Knoxville. Before academia, he worked as a licensed attorney for almost a decade in Florida.

Hoefges taught undergraduate and graduate media law courses. He served on the advisory board for the UNC Center for Media Law and Policy and also served multiple terms on the National Advertising Review Board.

“I was very pleased when Michael joined our faculty because he brought to our media law program much needed expertise in advertising law and regulation,” said UNC Hussman Professor Emerita Ruth Walden, a longtime colleague of Hoefges. “Without Michael, the school’s joint M.A./ J.D. program wouldn’t exist. He conceived the program, designed it, worked with the UNC School of Law to create it, and then served as adviser to the joint-degree students until illness forced him to retire early.”

Hoefges’ research interests included First Amendment commercial and corporate speech, as well as access and freedom of information law, such as issues related to commercial access to government records and databases.

“He was the leading expert on commercial speech in the country,” said Associate Professor Tori Ekstrand, Hoefges’ media law colleague at UNC Hussman since 2012. “He was also a consummate gentleman and scholar.”

Along with his academic prowess, Ekstrand remembered Hoefges’ sharp fashion sense — she often joked with him that if UNC Hussman had a “Best Dressed” award for faculty, he would win it — and a man whose concern for others continued even as his illness progressed.

Brooks Fuller, an assistant professor of journalism at Elon University and director of the North Carolina Open Government Coalition, also recalled Hoefges’ empathy. Fuller, Hoefges’ undergraduate student at UNC Hussman in 2005 and later his advisee, recalled the great guidance Hoefges offered him both personally and professionally.

“He was always the most prepared, organized and thorough teacher in the classroom. His depth of knowledge about the field was only outpaced by his investment in the school and his students,” Fuller said. “When my dad passed away in 2013, Michael helped me through the enormous, crippling grief even as he dealt with his own very similar medical journey, which he had already been fighting for more than half a decade.”

Hoefges earned his B.S., J.D., M.A. and Ph.D. degrees from the University of Florida, where he also taught as a doctoral student and held a Brechner Fellowship.

Throughout his career, he presented numerous papers at the national conferences of the American Academy of Advertising, Association for Education in Journalism and Mass Communication (AEJMC) and American Marketing Association (Marketing and Public Policy Conference).

He also leaves a legacy of influence and respect with every colleague and student he touched with his kindness, patience and concern.

Park Fellow Kristen Patrow, who served as Hoefges’ teaching assistant, sums it up:

“When I worked with him, he consistently went out of his way to try to give me new experiences to grow as a scholar and teacher. I am so glad that he was able to be a part of my journey. He taught me not only how to be a good academic but also how to be a better person.”

The Association for Education in Journalism and Mass Communication (AEJMC) Law & Policy Division has established a fund in Michael’s memory to help Law & Policy students attend the conference — write in "Hoefges Student Fund (L&P Division)" here if you would like to contribute.