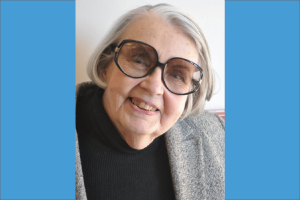 Val, as she was called, worked as a journalist and writer throughout more than 75 years of professional life. She began at the Chicago Daily News during World War II and retired in 2011 at the UNC Hussman School of Journalism and Media at UNC, where she taught feature writing for more than 30 years.

In tandem with those and other jobs, Val was a prolific freelance writer, publishing articles in Ford Times, Travel & Leisure, Southern Accents, The New York Times, American Heritage and the Carolina Alumni Review, among others. Her writing won dozens of awards.

The only child of Murza Valarie Mann Lauder and William Jay Lauder, Val was born in Detroit, Michigan. Much of her childhood was shared in the many columns and pieces she wrote as well as in her self-published memoir, “The Back Page: The Personal Face of History.”

Val attended Stephens College in Missouri but had to leave school when her father became ill and she needed to help support the family. She found a job at the Chicago Daily News as the paper’s first copy girl, assisting the staff as it reported the major events that marked the final years of World War II. Those experiences often provided content for Val’s later retrospective and personal narratives of that time period.

While a columnist and feature writer for the Daily News, Val also created and coordinated a series of news conferences for Chicago-area high school newspaper editors in the late 1940s. She arranged for students to interview dozens of luminaries, including political figures such as President Harry Truman, Gen. Dwight D. Eisenhower, Gov. Adlai Stevenson, Sen. Everett Dirksen and celebrities of the time such as Danny Kaye, Lena Horne, Jack Benny, Esther Williams, Jimmy Durante and Rosalind Russell.

Val’s interviews for her own articles featured scores of other actors such as Marlene Dietrich, Irving Berlin, Mickey Rooney and Carol Burnett. She even persuaded Frank Sinatra to write a Father’s Day piece for the paper. Photos of Val with dignitaries and celebrities adorned her home office walls.

After the Daily News, Val did a two-year, 16-state tour for the School Assembly Service and held several jobs in New York and New England.

Upon her father’s death, she and her mother moved to Chapel Hill where Val managed communications for the World Association for Public Opinion Research, the American Dance Festival in Durham and the Center for Women in Educational Leadership.

She settled into her lecturer role in 1980, teaching two classes of feature writing most semesters for the next three decades. She secured local newsmakers to be subjects for class interviews, most notably Dean Smith and Woody Durham, the former voice of the Tar Heel Sports Network. Students learned her wordsmithing talents and looked for her creative notes on their papers, all aimed at improving their storytelling techniques.

In retirement, Val continued to write, most recently producing columns for CNN and articles for the Saturday Evening Post online, the last two published on SaturdayEveningPost.com in May. Much of her writing appeared as personal essays, her sharp memories adding the flavor that made her storytelling so appealing and took readers back in time.

Those who knew her marveled at her extensive knowledge of classic movies, partly driven by meeting many actors who starred in the films, and enjoyed Val’s tidbits about various stars. She led a “Classic Movie Night Series” at the Carolina Club at the UNC General Alumni Association for almost 20 years, selecting films that fit the month or a specific holiday and inviting guest speakers to share insights about the films chosen. She would often send friends emails suggesting upcoming, don’t-miss movies appearing on Turner Classic Movies or would use movies to illustrate her articles.

Among professional activities, Val was active in the Public Relations Society of America, the North Carolina Press Club and Triangle Chapter of Women in Communications Inc.

Her parents and her beloved and faithful cocker spaniel, Winston, predeceased her. She is survived by her cousin, Doug Roeser of Clarkston, Michigan, and his family; and dozens of friends, colleagues and former students.

Funeral and burial rites took place at 2:30 p.m. Wednesday, June 23, at Church of the Holy Family in Chapel Hill. A reception to celebrate her life followed at the Carolina Club on the UNC campus.

Deep thanks and appreciation to the caring and supportive staff at UNC Hospice who provided attentive in home and in hospice care.

Learn more about Val in this 2015 interview recorded by UNC Hussman students for the Southern Oral History Program, run through UNC's Center for the Study of the American South.