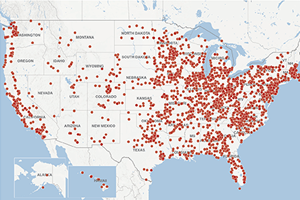 Private equity funds, hedge funds and other large investment groups have been aggressively buying and managing local newspapers in recent years, raising questions about the vitality of community journalism and the future of democracy at the grassroots levels, according to a report issued today by the UNC Hussman School of Journalism and Media's Center for Innovation and Sustainability in Local Media.

“The Rise of a New Media Baron and the Emerging Threat of News Deserts” reveals previously undocumented ownership and financial trends over the past decade, a period of immense disruption and distress for the entire newspaper industry.

Because the primary mission of the new newspaper publishers is to make money for their investors and shareholders, the report explores the possibility that many communities may soon lose their primary source of local news, leaving behind news deserts across entire regions of the country. “For more than 200 years, newspapers have been an indispensable auditor of democracy at all levels,” said Penelope Muse Abernathy, author of the report and Knight Chair of Journalism and Digital Media Economics in the School of Media and Journalism. “By documenting the seismic changes in newspaper ownership, this report seeks to raise awareness about the multiple challenges confronting local news organizations, and the impact the loss of newspapers can have on the health and vitality of communities throughout the country.”

The report is based on analysis of data from 2004 to 2016, collected on more than 9,500 local newspapers. Here are some of the findings:

“We are thrilled to release these findings, as the first major report from the Center for Innovation and Sustainability in Local Media at UNC,” said Susan King, dean of the UNC Hussman School of Journalism and Media. “We believe this report will engage America’s news leaders, business innovators and national policymakers, to shape a necessary conversation, and we urge others to join us in analyzing and understanding how American journalism is changing, and therefore affecting democracy.”

Visit newspaperownership.com for more information and to view the report.

About the Center for Innovation and Sustainability in Local Media

The UNC Hussman School of Journalism and Media's Center for Innovation and Sustainability in Local Media supports existing and start-up news organizations through its dissemination of applied research and the development of digital tools and solutions. The center supports the economic and business research of UNC’s Knight Chair in Journalism and Digital Media Economics and the Knight Chair in Digital Advertising and Marketing. In addition, it supports professors and students associated with the Reese News Lab, which designs, tests and adapts digital tools for use in small and midsized newsrooms. The center is funded by grants from the John S. and James L. Knight Foundation and UNC’s Office of the Executive Vice Chancellor and Provost. Visit cislm.org for more information.