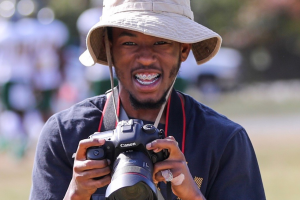 Founded in 1992, the Sports Journalism Institute’s (SJI) fellowship program for minorities and women seeks to diversify sports journalism by training and then placing select students into internships. Sixteen students make up SJI’s class of 2020, including UNC Hussman School of Journalism and Media student Landon Bost ’21, a Harrisburg, North Carolina, native. Bost just returned from the program’s weeklong sports journalism boot camp that began on June 1. It was held remotely — thanks to coronavirus health concerns — rather than at the Cronkite School of Journalism and Mass Communication at Arizona State University.

Bost first learned of SJI when Deadspin senior editor and writer Carron Phillips, an SJI alumnus and family friend, encouraged him to apply for a fellowship. At the National Association of Black Journalists (NABJ) conference in Miami in 2019, Bost says SJI came up again.

“Everyone I talked with at NABJ was preaching, ‘SJI is the program for you to be in,’” he said.

“Yeah, man. You’ve got to do SJI,” Upadhyaya told Bost.

Getting selected for an SJI boot camp and internship before Bost graduated became an important goal.

He applied in the fall of his junior year and heard in December 2019 that he’d been accepted into the competitive program for aspiring sports journalists. It was a thrill — and a relief — to get the news and join the likes of Upadhyaya, who plans a fall Baltimore Sun internship; Anna Kim ’10, now a principal at Community Solutions, a New York City-based nonprofit working to end homelessness; and Michael Martinez ’04, executive producer in Los Angeles for Crooked Media, founded by former Obama speechwriters Jon Favreau and Jon Lovett in 2016.

Just four years before hearing he’d been accepted to the Sports Journalism Institute, Bost, a 5'4" former Concord (N.C.) High School basketball team manager-turned-guard with a 4.5 GPA, played his first varsity game. In 2016, another high point: he was accepted to eight colleges. Bost chose Carolina on the strength of its exercise and sports science program — and the precedent set by some family members.

“I wrote myself a letter in third grade,” Bost said. “I was going to Carolina.” His dad, Ed Bost ’86, graduated with a mathematical sciences degree from Carolina. An aunt, uncle and a number of cousins are Tar Heels as well. And there was Carolina basketball, his favorite sport.

Today, Bost is a rising senior at UNC Hussman planning to graduate with a second degree in Hispanic linguistics and a minor in social and economic justice.

He credits his mother, Ella, with the advice that helped convince him to pivot from exercise science towards visual journalism as a career.

Bost took a first year work-study position in sports nutrition. It didn’t suit him. A marketing internship with UNC Athletics was more intriguing. All year, he talked with as many people in the fields exercise science and sports marketing and journalism as he could find.

Even short 15 or 30 minute talks were helpful. By the end of his freshman year, he knew he wanted to switch majors to media and journalism, and focus on his lifetime passion: sports.

As a sophomore, Bost was asked to help out with a Carolina Black Caucus event by taking photographs. It was his first real photography assignment.

Bost met Spectacular magazine editor-in-chief Phyllis Coley at a later caucus event. She told him he could write about sports for her Triangle audience if he could commit to doing so on a consistent basis.

For one of his first Spectacular stories in 2018, he wrote about several former UNC athletes including Vince Carter and Jerry Stackhouse releasing a letter against the Silent Sam Confederate monument then on UNC’s campus. The story was picked up by the New York Times and Washington Post.

Bost started out shooting everything with his camera set to manual focus. He bought himself a Canon Rebel camera for Christmas that year. His skills grew exponentially, and a talent for visual storytelling became evident. 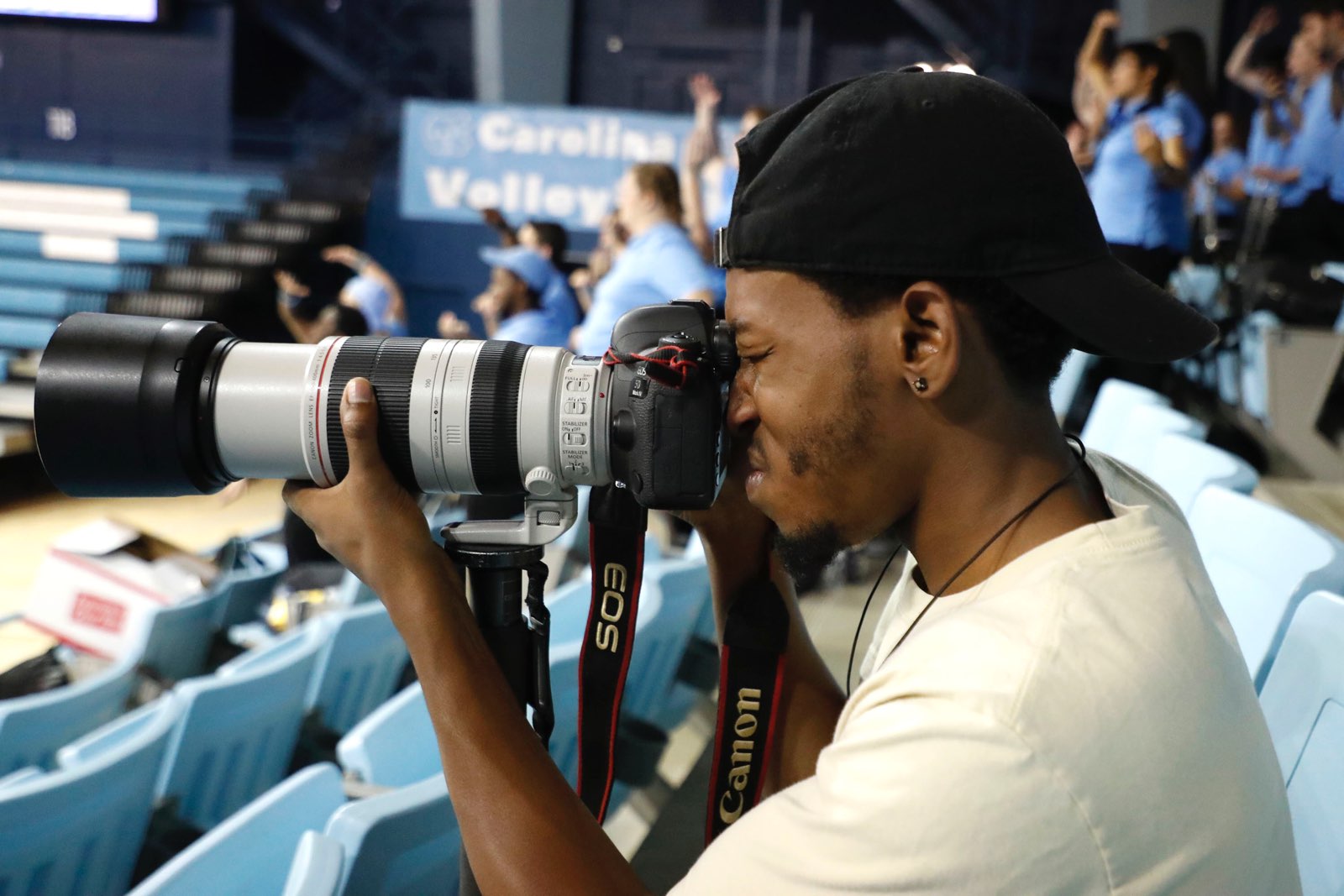 By his junior year, the media and journalism student was sure that some combination of storytelling that involved photography and video was the right path for him — and he worked hard to build all three skills. He studied MEJO 121 Introduction to Digital Storytelling with Heather Stephenson; MEJO 180 Foundations of Photojournalism with Chad Heartwood; MEJO 459 Community Journalism with Jock Lauterer; and MEJO 580 Photo Stories this spring with Phyllis B. Dooney. He shot football and men’s and women’s basketball games for Carolina, N.C. State University and for nearby N.C. Central University.

“In photography terms, Landon has command of time, light, gesture and form — he is nimble in his approach. His familiarity with photographing sports gives him a strong technical foundation,” Dooney said of Bost, who adapted to her small class’s pivot to documenting the coronavirus from home (see the @580witnesspandemic Instagram account for details). “However, it is Landon's aptitude and sensitivity to human issues that makes him a really promising visual storyteller.”

Of boot camp and bonding

Bost was wary of how an intense week of on-the-ground training without the Arizona Diamondbacks and the Phoenix Mercury teams would pan out in a remote format.

"I was worried about forming relationships and learning online,” Bost said. “But it turned out to be an amazing experience.”

“That was pretty surreal,” Bost said. “I watch Smith every weekday. Just hearing his voice on the Zoom chat was startling!” He learned about Smith’s start at the Greensboro News and Record and how local community journalism was a great place to develop a sportswriter’s voice.

On the first day of boot camp, Bost met 15 strangers.

“Look around,” the directors told his class. “This may be the most diverse room you’ll ever be in. Don’t take that for granted.”

“I learned from them. And after an intense week together, I’ve grown with my classmates,” said Bost, who talked about how they all plan to stay in touch by Zoom, GroupMe and Twitter.

Bost has been in touch with Memphis Commercial Appeal executive editor Mark Russell, with whom he was to intern this summer. That has been put on hold, but Russell is working on making that a fall possibility.

“We’d love to have you out here,” Russell told the SJI fellow by phone in May. 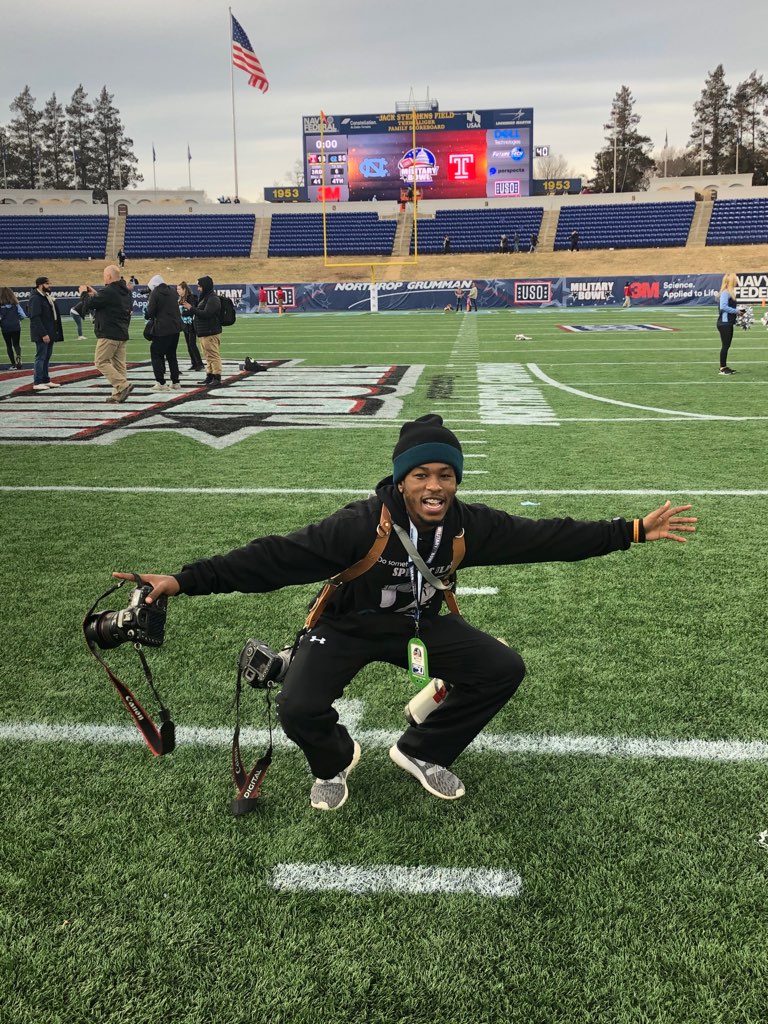 Meanwhile, the rising senior is raring to go. Bost took a remote Hispanic film class over Maymester, is enrolled in Heartwood’s visual entrepreneurship class right now, and is taking media law later this summer. He can’t wait to get on campus for MEJO 582: Advanced Documentary Visual Storytelling and MEJO 489: Photojournalism, Lighting and Business Techniques.

After graduation, a job that allows him to explore the intersection of race and sports would suit him well. He’s ready to go anywhere to do it, in order to work for an editor who will help push him to be the best possible journalist he can be.

Basketball remains his favorite sport by far to shoot.

“It’s such a theatrical environment,” he said. “Bright lights beaming down on the wooden court. Reflections gleaming up from it. Big, historic venues,” he described. “And the motion of the players, without a helmet, where you can really get intimate and understand their emotions and see them when you are taking photos.”

Volleyball is the hardest for him. “I can’t predict where the ball is going, because I’m not a player,” he said with a laugh. “And the net gets picked up by the autofocus sometimes.” He learned from Ethan Hyman at The News & Observer recently to focus on a volleyball player and follow them through a play.

Bost, incoming co-president of the Carolina Association of Black Journalists alongside Samaria Parker, is preparing himself for that dream interview with former Carolina basketball star turned longtime pro Vince Carter, the one that captures what it’s like to be the only NBA player in history to appear in a game in four different decades.