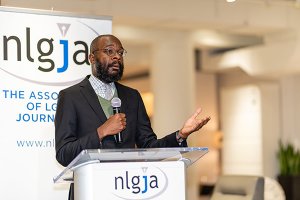 UNC Hussman graduate Sharif Durhams ’99 will return to his home state of North Carolina this spring to lead the newsrooms of two of North Carolina’s most consequential newspapers – Raleigh’s News & Observer and Durham’s Herald-Sun.

Durhams, now the night homepage editor at The Washington Post, replaces Jane Elizabeth as managing editor of the newsrooms. As she stepped down in November, Elizabeth asked the papers to see the opportunity for more diversity on the masthead.

One opportunity Durhams sees in making the move, in addition to the proximity to dear family and lifelong friends, is to expand how the papers cover North Carolina’s diverse and underrepresented communities.

“Newsroom conversations are very different when you have diverse leadership, when you have women, when you have people of color, and when you have other kinds of diversity, not only in leadership positions, but in the newsroom,” he says. “The goal is to cover underrepresented communities with the same nuance that we cover mainstream communities. Diverse communities are part of our overall community and those stories shouldn’t feel like a box to check.”

In the wake of George Floyd’s death this summer, Durhams says, mainstream news organizations began to respond to the racial undercurrent of the nation, something many in the news industry had been calling attention to for years.

“We’re frankly at the beginning of that change, and it came out as a result of a lot of work. And sometimes that work gets combined with an opportunity,” he says. “I think part of that opportunity is that there are a lot of our traditional readers who are confused, and they wonder, how did we get to this place in our country? Part of the answer to that is that we haven't done a great job of explaining the diversity of our country and the challenges that people face.”

In 2018, Durhams became the first Black president of NLGJA: The Association of LGBTQ Journalists, which pushes for fair and accurate coverage of the LGBTQ community and for diversity in newsrooms. He was re-elected this year and will serve until 2022. At Carolina, he was the first Black editor of The Daily Tar Heel, and his successor Rob Nelson ’00, now of WGN America, was the second. Durhams, who received the paper’s Distinguished Alumni award in 2019, said diversity in the DTH’s leadership then fell away.

In 2019, he and Erica Beshears Perel ’98, now the general manager of the DTH, created the Sharif Durhams Leadership Program, which welcomed its first cohort in the 2019-20 school year. In conversations with the group, he met students who said they didn’t feel comfortable in the DTH newsroom and hesitated to speak up or pitch story ideas that reflected their perspectives.

“We wanted to create a place for them to do that and make sure the students who are there know they belong there,” he says. “We also wanted to make sure that all students got the opportunity to be exposed to news leaders and to get the kind of guidance about applying for internships, and life guidance, that some other students get.”

The program has already been a success with students creating the kind of coverage that had been missing in the DTH.

“The feedback I have gotten from news leaders who have visited the students in the program has been tremendous,” Durhams said. “And we've already seen some of the students have tremendous opportunities, and that includes leadership opportunities at the DTH.”

After college, Durhams worked for The Charlotte Observer before becoming the Milwaukee Journal Sentinel’s first social media editor and digital strategist. He worked for The Washington Post and later as senior editor for digital global programming at CNN before returning to The Post in April 2020. His work has been the best of both worlds, he says, preparing him to help journalists adapt and continue to find new audiences even with the constant change in how audiences consume news.

“I spent my first 10 or so years out of school doing deep reporting, covering higher education, local government, state government, and really understanding the needs of reporters and editors,” he said. “In 2008, my career started a transformation into understanding digital audiences. I had years of work in the local newsrooms and in national and international news, taking the understanding of journalism that I had and trying to match it with new platforms and the new ways people were communicating.”

And once the COVID-19 pandemic is over, he says he looks forward to visiting UNC Hussman.

“I can’t wait until we have had injections in our arms, and I can come over the school. One of the wonderful things about coming back is reconnecting with others and seeing how we can help each other.”