Stacy Wall ’89 shoots from the hip about his award-winning, artful directorial style 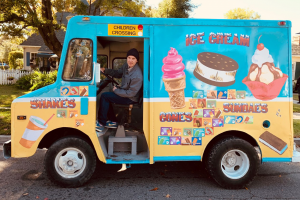 UNC Hussman School of Journalism and Media alumnus Stacy Wall ’89, one of the industry’s most highly respected commercial directors and a generous supporter of the school via the Emma Lineberger Scholarship Endowment Fund, visited remotely with Professor John Sweeney’s sports marketing class earlier this semester from his Los Angeles office.

Speaking via Zoom with 30 students, Wall (at right, on the set of an Uber Eats commercial) shared the ups and downs of life on the cutting edge of directing television commercials for some of the world’s biggest brands. He began by detailing how he switched to Carolina’s media and journalism major in the late 1980s out of sheer math avoidance and, fortunately, “stumbled” into an advertising course which led to two John Sweeney advertising creative classes.

“I loved everything about [Sweeney’s] class,” said Wall. “I was a huge sports fan and a geek who followed a lot of commercials.”

He credits alumna Susan Credle ’85, now global chief creative officer at FCB Worldwide, with the assist on landing his first job out of Carolina at BBDO in New York. He continued on as copywriter and creative director for nine years at Wieden + Kennedy in Portland, Oregon. Wall transitioned to directing television commercials in 2001 after briefly joining a production company that pitched television shows — a move that didn’t work out.

The way Wall describes it, some old friends from The Martin Agency in Richmond, Virginia, asked him to direct a television commercial at a low point in his career trajectory and he thought to himself, “Well that’s the last thing I’ll try before going to Dan Wieden and begging for my old job back.”

The resulting commercial put him on the map, no looking back. And, after putting in the work year after year, Wall found himself directing the likes of the widely-lauded LeBron James “Rise” commercial for Nike nine years later.

“I don’t regret it,” Wall said about his early agency copywriting days. “It still serves me to this day. I speak fluent ‘agency.’”

He added, “And I went to ad school, not film school. Making commercials is NOT moviemaking. It’s a different animal.”

“What happened to the concept ad? I miss those days. Where is the high concept ‘Greek Freak’ or Steph Curry commercial?” he asked Keyshawn Garrett ’22 rhetorically after reviewing one in a series of LeBron James ads he did for Nike early in the basketball great’s career.

Wall, one of nine elite commercial directors who make up the production company Imperial Woodpecker he launched in New York in 2009, checked himself when Elizabeth Scotty ’23 asked for tips and tricks of the trade.

“No tricks. You just want your client to make sure they are being listened to,” he said. He explained that he tried to anticipate how to explain his pitches in light of what his client was hoping for and was concerned about.

“But it should be a dialogue,” he told Scotty. “You’re presenting your point of view, and you want to hear theirs. They can sniff out if you’re lying or being manipulative. So give them options.”

“You have to tailor the concept to each athlete’s personality,” he told Catherine Morgan ’21 about working with sports stars versus trained actors. “And tell them not to worry about being perfect,” citing the “Speed Unleashed” Nike ad with Detroit Lions wide receiver Calvin Johnson and celebrity P Diddy Combs he crafted with the soft-spoken Johnson’s down-to-earth nature in mind.

The class took notes on how to capture lightning in a bottle by collaborating.

“It’s more interesting if you don’t preplan, and let editors discover the connections,” Wall said as he described the shooting complexities of a “Where Everyone Plays” Coke commercial he made two years ago as a love letter to Premier League fans, producing enough varied footage that his editor could capture what Wall described as the “crazy quilt” quality of what it’s like to be a soccer fan in the UK.

Along those lines, Wall gave his film editor on a Blake Griffin commercial for Nike a shout-out for cutting it to the Dan Penn and Spooner Oldham-penned R&B classic “I’m Your Puppet,” a musical selection that wasn’t planned for the “Dr. Drain” commercial but which pulled the whole video together. 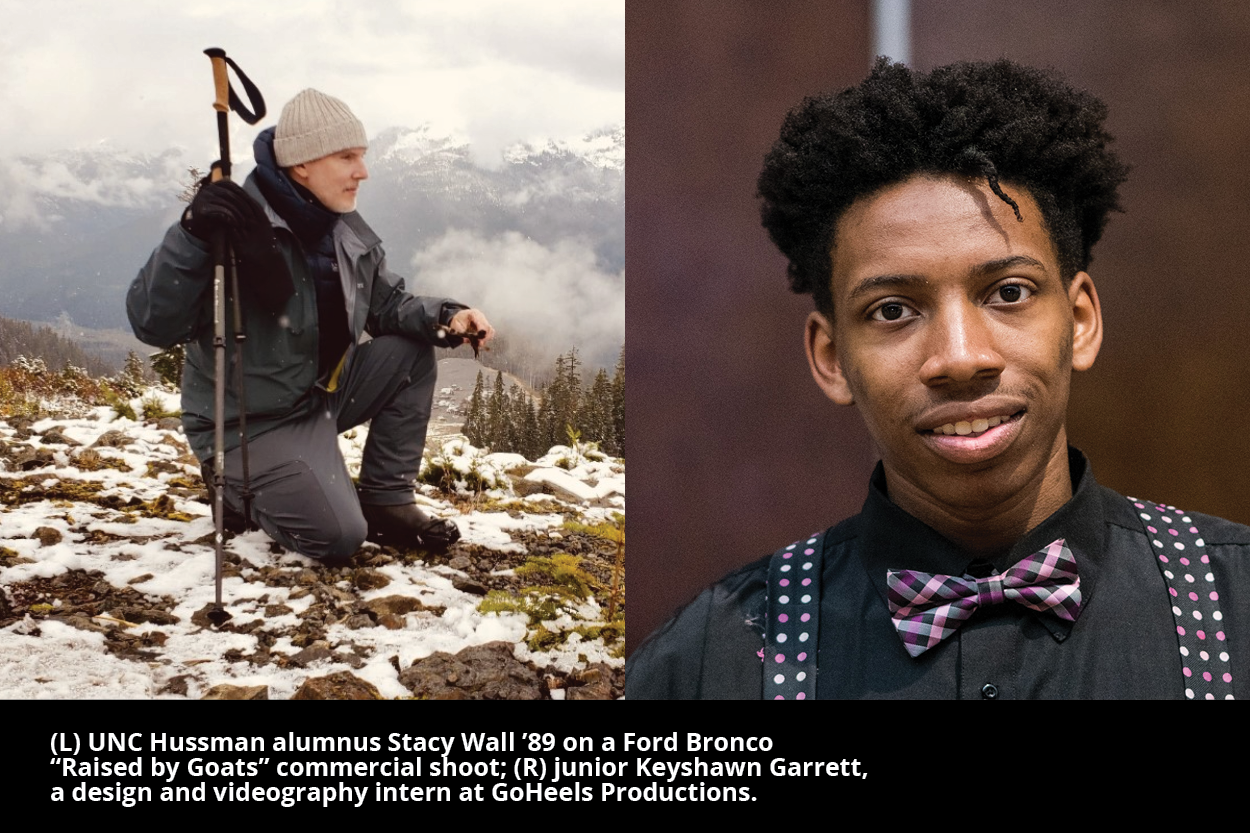 After class, Wall and Keyshawn Garrett ’22 took a deeper dive into the industry via phone. Garrett is a UNC Hussman junior interning with GoHeels Productions, doing graphic design and video work for Carolina Football, UNC Women’s Lacrosse and UNC Wrestling. A condensed/edited version of that conversation follows.

UNC HUSSMAN: Stacy, you grew up in Winston-Salem and Lewisville near Clemmons.  Keyshawn, you’re from Enfield. Did you both grow up wanting to come to Carolina?

STACY WALL: No, I grew up in Chris Paul territory and was a Wake Forest fan. My whole life, Carolina was “The Big School.” I went to West Forsyth High School and graduated in 1985.

KEYSHAWN GARRETT: That’s way before I was born in 2000.

SW: Okay, that’s the second time I’ve felt this old. The first was when I was showing your class commercials I’d made before they were alive.

KG: That’s how I felt my whole freshman year about “The Big School.” I’m from a very small town. There were 72 people in my senior class. I knew it was going to be a challenge. But I’m used to adapting. I had to adjust to the level of difficulty here at Carolina. And I learned I have ADHD and dyslexia here. So I’m glad I figured that out. It’s not been effortless. But I’m adapting to being a normal-sized fish in a big pond.

SW: Well, I admire you for accepting that challenge. It’s easy to get overwhelmed and sleepwalk your way through college. I almost did that. Finding John [Sweeney’s] class was a godsend. I had defaulted to a business major but I didn’t know what I wanted to do. Then I found Sweeney’s class.

But I almost got kicked out of JOMC 170 [Principles of Advertising]! I was partnered with a team that I didn’t see eye-to-eye with, and they revolted. That was a learning experience. Sweeney asked me to come to his office and scared me straight. I had to learn about collaborating.

KG: I intended to be a cardiologist but realized I was much more interested in media and journalism. My goal is to build a career as a creative director, maybe build my own multinational brand someday. I’m taking both “Sports Marketing” and “Advertising and Sports Communication” with Professor Sweeney this semester.

I didn’t know what I was signing up for! But I’m a religious guy. It felt like a message from God to me, to have opportunities put in front of me and to learn to execute and use them. I like to wake up and learn something new, and layer that new skill or that new advice into what I hope will be a career that takes me to the top.

Big picture, I want to succeed in order to help minorities. Not just race. Immigrants. Black. LGBTQ community. Help give a voice to people who feel they don’t have a voice. I’ve been there. I’m not rich. There were days I had to cut down on what I eat to save money. I lived in a house where we went for five weeks without electricity and had to learn to survive. I know how to overcome. I’ve felt like an outcast that no one really hears. So ultimately, I want to be a role model for people, to encourage them to dream of success.

SW: I admire the ambition and tenacity with which you’re taking on Carolina. You’re embarrassing me, actually. When I was a junior, my main concern was just hoping I graduated. I admire any student that has the self-awareness to truly take advantage of their time here.

I realize how privileged I was to get to Carolina. I didn’t maximize my time there, but I was lucky enough to have advantages and opportunities to build from, and meet people I could learn from. John Sweeney, first and foremost.

And then I did the best I could. I didn’t fall prey to alcohol or partying. Could’ve. But my family jokes that I was born a 47-year-old man. I have used my creativity or sense of humor or whatever it is and have tried to be a hard-working, decent person to work with.

So much of what I do is about communication. It’s navigating between the creative and the business world, and that feels like a sweet spot for me. All jobs are sort of the same in that way, aren’t they?

I tell my wife I’m in the stress management business. I can explain the same thing 57 times with the same enthusiasm level, and bring people together behind a project.

KG: So can you tell me about what it’s like to work with multinational companies?

SW: Well, it’s complicated. They’re all different. I’ve spent 32 years creating commercials now. And I’ve seen friends get consumed by this high-pressure industry. But I try to remember that what I’m doing is employing people. There are 125 people who have a job because of my ideas about how the Amy Poehler script we’re shooting today should work. It has to serve the client’s agenda. And it has to be funny.

My advice is: it doesn’t matter which company the meeting is with. Take every opportunity to double-down and reinforce why you got the job in the first place. Don’t assume everyone on the call knows. Remind them: we’re here to do THIS. What I admire about this brand is THAT. Then and only then do you go into the day-to-day stuff.

The brands you’ll work with, you are in service to what they find valuable. Not to further Keyshawn’s career. To do a good job, which will lead other brands to say “Hey, Keyshawn knows what he’s doing.”

My time will end. There aren’t a lot of 60-year-old commercial directors. I’ve set up my company in anticipation of my own irrelevance. So that I can offer boring advice to the young up-and-comers, like I’m boring you right now.

KG: [laughs] It’s nice to hear from someone with your experience, who is thinking about the future. John Sweeney tells me, “Learn everything you can from what others have experienced. Then add your own insights.”

SW: Here’s some more advice. Don’t swing for the fences every single time. Every meeting and every project is not your own personal “Citizen Kane.” Be like Barry Sanders [former NFL running back], who retired without any major injuries because he minimized damage to his body when he saw that a hole wasn’t opening up, when not every play was designed for success. You have youth, ambition, humility. Don’t be your own worst enemy with TOO much ambition. Remember, it’s very rarely one project that could make or destroy your career. It’s a reputation you build over a lifetime.

KG: If you had a time machine, what advice would you go back and give your Carolina self?

SW: Stop eating at Bojangles five times a week?! You know, early on in my career I was asked to direct some ESPN commercials, and I turned it down out of humility. It turns out, I eventually did take that leap from copywriting. I’ve gotten an immense amount of enjoyment and satisfaction from directing commercials. I would’ve told myself to go for it about eight years earlier!

You know what else I’d do, Keyshawn? In 1986, between my freshman and sophomore years at Carolina, I would drive to the 7-Eleven to buy as many packs of 1986 Fleer cards as I could, as they might have included Jordan’s rookie which is now worth over 500k.